Two teams so absent from championship history for so long until recently face off for the AFC championship.

The Kansas City Chiefs won their first NFL title since 1970 when they beat San Francisco in last year's Super Bowl. When they host Buffalo, the Chiefs will take on a franchise that went from the 2000-2016 seasons without even getting to the playoffs.

What we get Sunday is a matchup of dynamic offenses and overlooked defenses, the top two teams in the conference. Kansas City (15-2) has the confidence of a reigning champion and a charisma few NFL teams can match. Buffalo (15-3) has an undying belief that after years in the doldrums, the formula is on hand for a return to the Super Bowl. 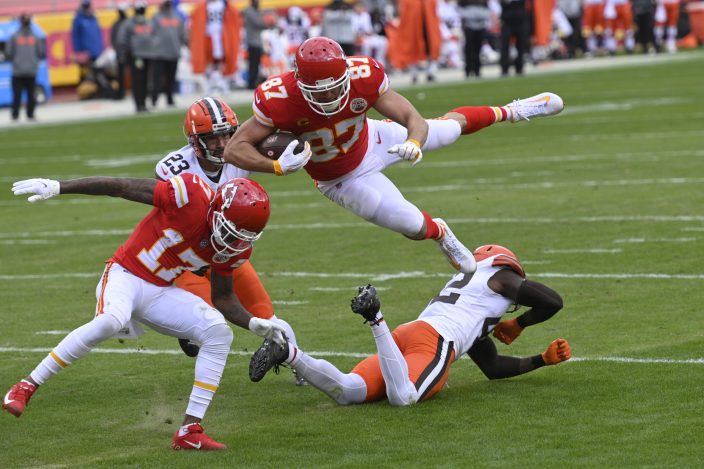 Here's what we figure to see.

WHEN THE BILLS HAVE THE BALL:

Some Bills fans are worried about their team's ability to run the ball because Buffalo ranked 20th and didn't do much on the ground in the playoffs. It would be a boost to get Devin Singletary going behind a solid line anchored by center Mitch Morse and right tackle Daryl Williams. Of course, Josh Allen is one of the biggest threats as a runner among all quarterbacks, and he will use his feet and bulk to advantage. 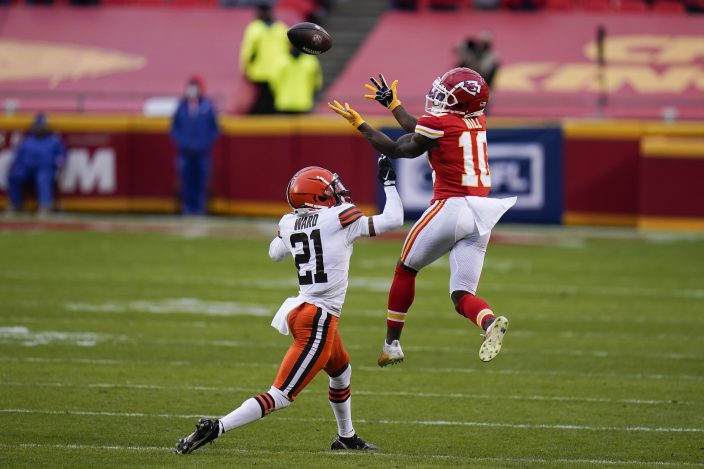 Allen isn't as proven a passer yet as Kansas City's Patrick Mahomes, but Allen's third pro season has been superb. He has learned to read the field and make smarter decisions while also utilizing a deeper receiving corps than some recognize.

Sure, All-Pro Stefon Diggs is the primary target and will cause havoc for Chiefs cornerbacks Charvarius Ward, Bashaud Breeland, Rashad Fenton and L’Jarius Sneed. Allen to Diggs is the key offensive combination and one of the league's best, but Cole Beasley, John Brown, Isaiah McKenzie and rookie Gabriel Davis can be playmakers.

The Chiefs have All-Pro safety Tyrann Mathieu and underrated Daniel Sorensen at safety and they will play significant coverage roles. They'll need Chris Jones, Frank Clark and others up front to get some pressure on Allen while keeping him from getting outside and making plays with his legs and arm. 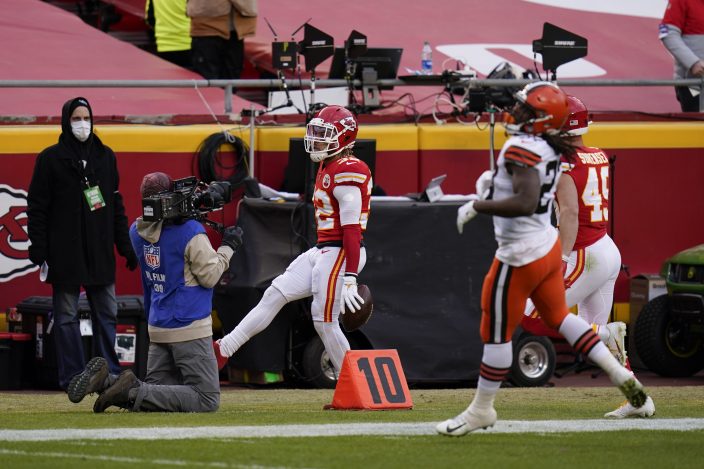 Kansas City Chiefs safety Tyrann Mathieu (32) celebrates after intercepting a pass during the second half of an NFL divisional round football game against the Cleveland Browns, Sunday, Jan. 17, 2021, in Kansas City. (AP PhotoJeff Roberson)

WHEN THE CHIEFS HAVE THE BALL:

There's always excitement when KC is on offense, but there's also the uncertainty of how Mahomes will perform — and for how long — coming off the concussion sustained last week. Even as the Chiefs downplay it, there has to be concern. Not to be unkind, but expecting the Chiefs to advance with Chad Henne at quarterback is a long shot.

At his peak, Mahomes is football's most resourceful QB, a gambler who comes up aces most of the time. The Bills must produce a pass rush and have the players to do it up front with Jerry Hughes, Ed Oliver and Mario Addison among a deep line rotation. The winner of the trench battles with the likes of Chiefs LT Eric Fisher and C Austin Reiter will be impactful. 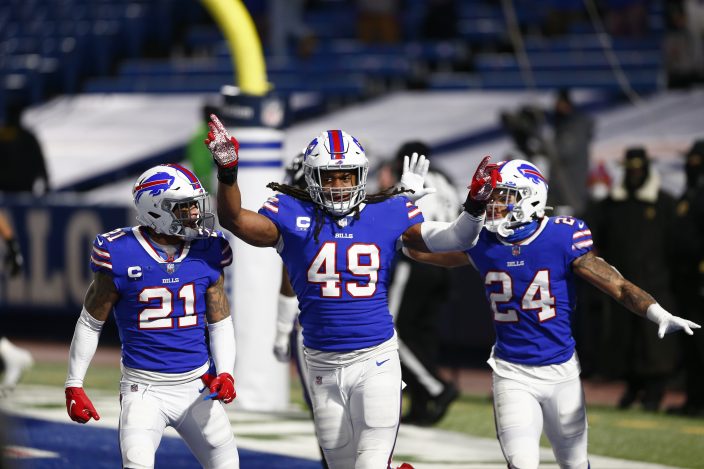 Unquestionably, though, the matchup of outstanding Buffalo CB Tre'Davious White and All-Pro WR Tyreek Hill will be in the spotlight. The Chiefs find dozens of ways to get Hill the ball as a receiver or runner, and White is among the top shutdown cornerbacks.

Even if Hill is not a major contributor, Mahomes has unanimous All-Pro tight end Travis Kelce, wideouts Sammy Watkins, Demarcus Robinson and Mecole Hardman. Kelce is most dangerous on third downs and near the end zone, but that's like saying Justin Timberlake has a few dance moves. Not allowing Kelce to dominate is essential for Buffalo, whether it's safeties Jordan Poyer and Micah Hyde or one of the linebackers in coverage.

Kansas City is eager to have rookie RB Clyde Edwards-Helaire back from a high ankle sprain to fill out its dynamic attack. Edwards-Helaire had a season-high 161 yards rushing in KC’s 26-17 win at Buffalo in Week 6. 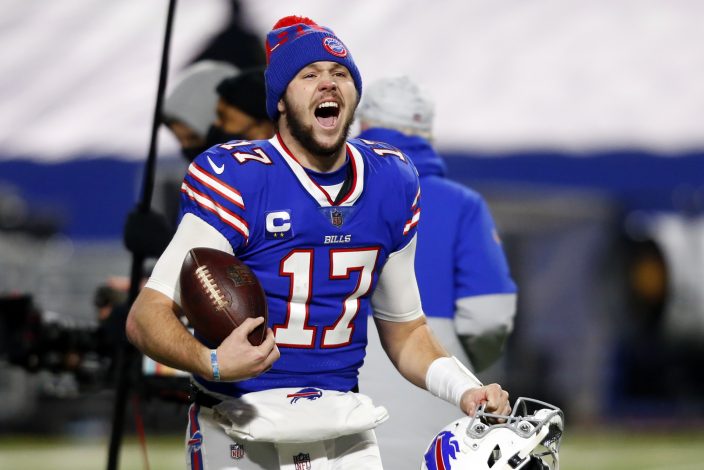 Kansas City placekicker Harrison Butker has been a tad inconsistent lately, and the Chiefs can't afford that Sunday. But he has a big leg and has made dozens of crucial kicks. That could provide an edge over Bills rookie Tyler Bass — except that Bass has been very reliable all season. 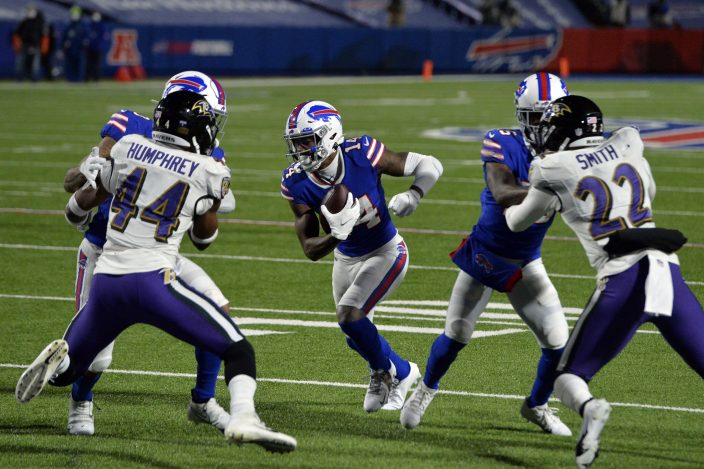 Buffalo punter Corey Bojorquez and Kansas City rookie Johnny Townsend were two of the most dependable in the AFC.

Andre Roberts is one of the NFL's most dangerous kick returners. Hardman has the speed to break any runback for Kansas City, too.

Andy Reid might have the most impressive coaching tree among the NFL's current head men, and Sean McDermott is on one of the branches.

McDermott has done a spectacular job in Buffalo, a franchise that last saw the playoffs at the turn of the century until he arrived, changed the culture and upgraded the confidence level. Reid fired McDermott in 2010 when both were with the Eagles, and told him he would benefit from the move.

“Yeah, we kind of jab about it here and there,” McDermott said. “But we can do that because he knew. He told me then, ‘This is the best thing for you.’ And he was right.”

Reid simply has been among the NFL's best coaches for more than two decades, and his innovative, risk-taking nature on offense are a hallmark in KC. The fourth-down gamble that sealed the win over Cleveland last weekend surprised plenty of people. It shouldn't have.

In DC Steve Spagnuolo and OC Eric Bieniemy, Reid has two of the top assistants around: instinctive and hawkish enough to match Reid's philosophy.

Buffalo went to four Super Bowls, 1991-94, losing them all. No other franchise has made the big game four straight times. But the Bills, unfairly, were branded as losers for dropping those games. Here's a chance to erase those memories and silence those critics.

They went from 2000 through 2016 without getting to the playoffs. Now in their third postseason in four seasons, that's another memory to wipe out.

Kansas City, which won its first NFL championship in a half-century a year ago — talk about droughts — can become the first repeat winner since New England in the 2003-04 campaigns. The Chiefs keep playing close games, dating to the 2020 postseason, so they know how to handle the heaviest pressure.

Reid is an all-time great coach who could tie Hall of Famer Joe Gibbs for postseason victories with his 17th.