If anything, Hank Aaron was underappreciated for much of his unparalleled career.

Exiled far from the media spotlight — first in Milwaukee, then in Atlanta — the Hammer went about his business in baffling obscurity compared to the other stars of his era, such as Willie Mays and Mickey Mantle.

It was only late in his career, as Aaron set his sights on perhaps the most hallowed record in all of American sports, that much of the country finally seemed to recognize the greatness they'd been overlooking for the better part of two decades. 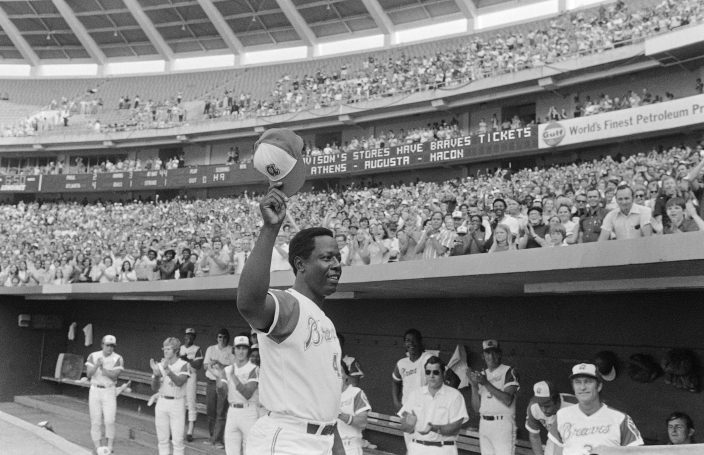 "In my day, sportswriters didn’t respect a baseball player unless you played in New York or Chicago,” Aaron once said. “If you didn’t come from a big city, it was hard to get noticed.”

That forever changed, and rightfully so, on a chilly April night in 1974 when Aaron drove a pitch from Al Downing over the left-field fence at long-gone Atlanta Stadium for his 715th homer, dethroning Babe Ruth as baseball's home run king.

Years later, Aaron would still marvel at who was there to witness his seemingly effortless swing into immortality. 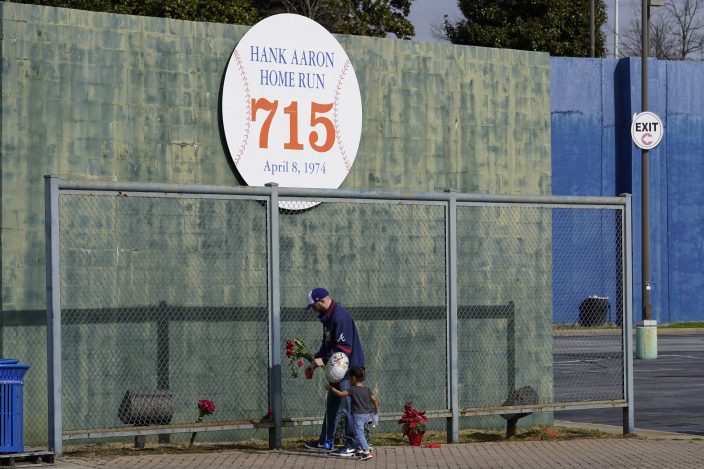 Les Motes and his two-year-old daughter Mahalia leave flowers, Friday, Jan. 22, 2021, in Atlanta, near the spot where a ball hit for a home run by Atlanta Braves' Hank Aaron cleared the wall to break Babe Ruth's career home run record in 1974. Aaron, who endured racist threats with stoic dignity during his pursuit of Babe Ruth but went on to break the career home run record in the pre-steroids era, died peacefully in his sleep early Friday. He was 86. (AP PhotoJohn Bazemore)

Georgia Gov. Jimmy Carter, who was just two years away from being elected president.

“Those were the giants in our time,” Aaron said. “I was out there playing this little bitty baseball game ... and these guys were coming to watch me play. I guess it must have been a pretty big deal.” 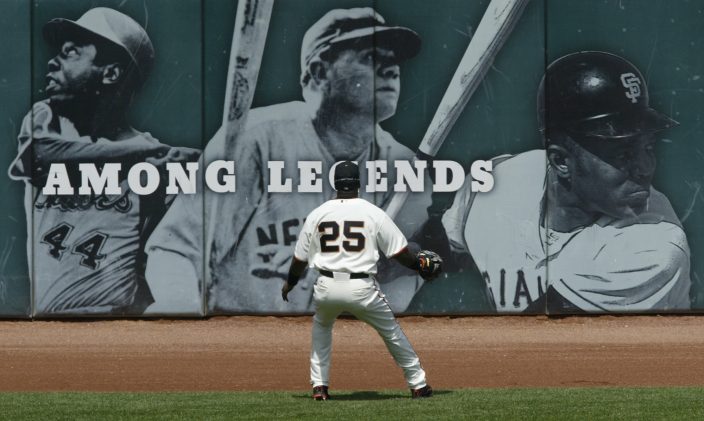 San Francisco Giants' Barry Bonds watches as a home run hit by Los Angeles Dodgers' Jeff Kent goes over the wall as he stands in front of a sign that bears the photos of, from left, Hank Aaron, Babe Ruth, and Willie Mays, Sunday, May 14, 2006, at AT&T Park in San Francisco during a MLB baseball game. Bonds remained one home run away from hitting his 714th career home run and tying Babe Ruth for second place behind Hank Aaron in career home runs. (AP PhotoDino Vournas)

Aaron's death Friday at age 86 provided the impetus to look back on a career that was epic on so many levels.

“Hammerin' Hank” will always be remembered for 755 — his final home run tally — but the power shots were really just the tip of his five-tool arsenal.

He could hit for average. Aaron won two National League batting titles, hit at least .300 in 14 seasons, never struck out 100 times in a year, and finished with a career average of .305. If you took away all his homers, he still had more than 3,000 hits. 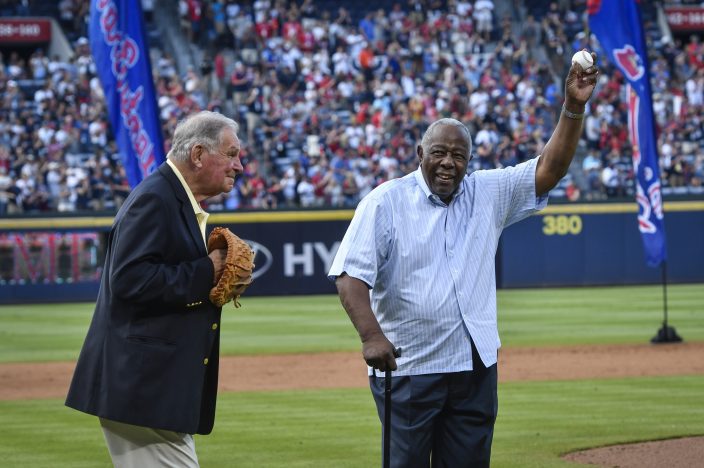 Hank Aaron holds up the ball after throwing the ceremonial last pitch to former Manager Bobby Cox after a baseball game against the Detroit Tigers and the Braves last game at Turner Field, Oct. 2, 2016, in Atlanta. (AP PhotoJohn Amis)

He was deceptively fast. Aaron reached 20 stolen bases six times and was successful on nearly 77 percent of the swipe attempts over his career. In 1963, he became only the third member of the 30-30 club — 30 homers, 30 stolen bases — after Ken Williams and Mays.

What about defense? Aaron started out as a middle infielder but once he got acclimated to right field, he captured three Gold Gloves and probably deserved more. He had a rifle for an arm and fielded his position with such smoothness and grace — a striking contrast to Mays' flamboyant style — that he made the job look easier than it really was.

“I wish our players would look at the back of that baseball card,” Braves manager Brian Snitker said. “It’s stupid."

Snitker meant that in a good way, of course. Aaron was numbingly consistent, which explains how he broke Ruth's record without ever hitting more than 47 homers in a season.

Aaron piled up at least 20 homers in 20 consecutive seasons. He hit .300 for the first time at age 21; he did it for the last time at age 39. He had least 60 RBIs every season of his 23-year career except his last, when he played just 85 games for the Milwaukee Brewers.

Despite all that, Aaron struggled for years to gain recognition for his accomplishments.

As unfathomable as it might seem today, then-baseball Commissioner Bowie Kuhn didn’t even bother showing up for the historic night when Aaron broke Ruth's record. The commish sent one of his assistants, Monte Irvin, who brought along a watch to mark the occasion.

“I don’t know what happened to it,” Aaron would say years later, looking at his empty wrist with a smirk on his face. “All I know is I’m not wearing it now.”

Of course, Kuhn's slight was a mere blip compared to all the hate mail Aaron received as he approached Ruth's record. Racist fans were outraged that a Black man was taking down the hallowed mark of a white man.

Aaron never forgot the ugliness, but he didn't let it consume him.

In the end, that would be his most remarkable legacy.

“He lived his life as an example to all of us," Hall of Famer Ken Griffey Jr. said. “His talent, major league records and honors are easy to see, but all who had a chance to know or even meet him know his true greatness was in how he lived and inspired people off the field.”

Thankfully, Aaron lived to a ripe ol' age, long enough to experience the reverence he had earned and so richly deserved.

Overlooked no longer, he took his rightful place among the seminal sporting figures of the 20th century, from Muhammad Ali to Jim Brown to Kareem Abdul-Jabbar.

“Let me tell you something, when he walked through the clubhouse it was like E.F. Hutton,” longtime Braves star Chipper Jones said. “Everybody shut up. Everybody watched his movements.”

Yet, even as he took on an almost mythical aura, Aaron always carried himself with humbleness and dignity.

“He was never Hank Aaron," Snitker said. "He never walked around like he was the home run king and one of the greatest players to ever play the game. He was one of us. That’s what I remember, the person that he was and how he treated people.”