Britain’s INEOS Team UK overcame a major technical issue to beat Italy’s Luna Rossa by 33 seconds on Saturday, retaining its unbeaten record after five races in the America’s Cup challengers series and to qualify automatically for the final.

British yacht Britannia came from behind to lead by one second at the final mark and held on to win a race which contained nine lead changes and was the best of the regatta so far.

When the boats came together on opposing gybes near the bottom of the last leg — Team UK on port and Luna Rossa with the right of way on starboard — Britannia slid just across the bow of Luna Rossa. The Italian team immediately protested but the umpires dismissed the protest and Britannia went on to a narrow win. 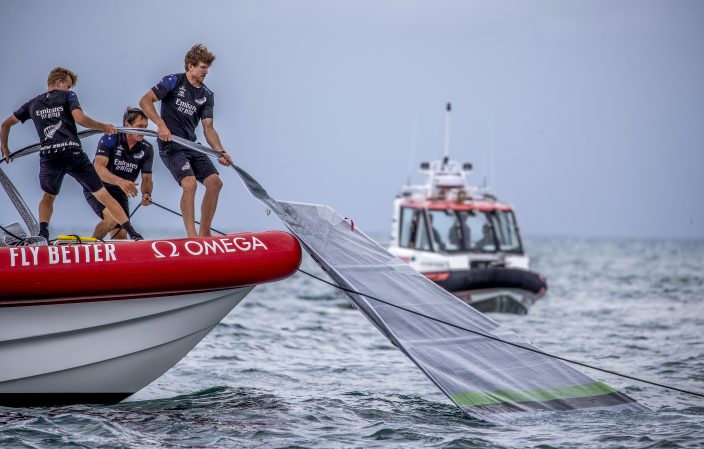 Team UK now moves directly to the Prada Cup challengers final while Luna Rossa will race the United States team American Magic in the semifinal. American Magic is currently making repairs to its race yacht Patriot which was severely damaged in a capsize a week ago.

The British team had a major problem in the leadup to Saturday's race with the cunningham — the hydraulic downhaul system which controls the shape of the sail and rake of the mast. They were able to take advantage of a new rule, just brought into force, which allows both teams one chance to call for a 15-minute postponement to the start.

The race start had already been delayed on several occasions as the wind shifted from southwest to west, forcing the race committee to make changes to the orientation of the course. 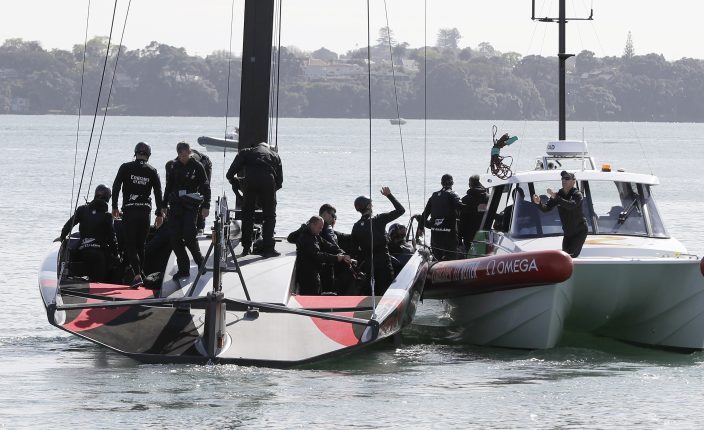 FILE - In this Sept. 18, 2019, file photo, New Zealand's America's Cup AC75 boat and crew leave their base at Auckland's Viaduct Harbour for a test sail on Waitemata Harbour, in Auckland, New Zealand. The futuristic present and storied past of the America’s Cup will converge from Friday, Jan. 15, 2021 at Auckland, New Zealand when racing begins to find the latest winner of the famous sailing trophy first contested in 1851. (AP PhotoMark Baker, File)

The technical issues aboard the British yacht forced it to rely largely on guesswork in the way it controlled the trim of its mainsail and it again showed outstanding tactical sense and crew work.

“Our mainsail trimmer did an awesome job to try to keep us powered up downwind,” Team UK skipper Ben Ainslie said. “We were losing a little bit as you probably saw, had a high fast mode. We guessed the setting just about right for the up winds and it was nice to have enough pace to get around.

“We were missing one of the key settings for the power of the boat so the guys just did an awesome job getting us around the track in one piece and getting the win.” 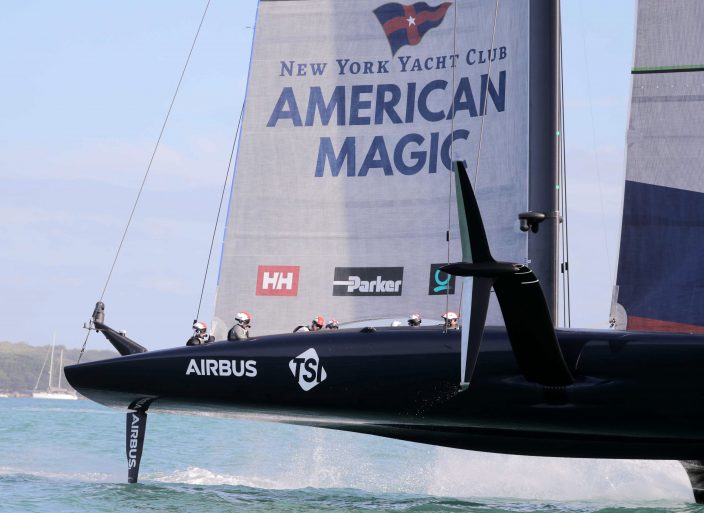 Britannia and Luna Rossa were side by side across the start line with the British yacht to windward — Ainslie pushed the Italian yacht to the left-hand boundary before tacking away.

When the boats crossed, Luna Rossa was just in front of Team UK but the British boat was slightly faster. It approached the top mark just inside Luna Rossa and rounded two seconds in front.

Luna Rossa showed its speed advantage downwind and reached the second mark nine seconds ahead. It extended on the second upwind leg and led by 19 seconds at the top mark.

Team UK made some gains on the fourth leg of the leg of the six-leg race, cutting Luna Rossa’s lead to 10 seconds. It continued that improvement on the penultimate leg, finding speed on the left of the course as the wind continued to shift.

The British yacht turned the final mark just one second ahead of Luna Rossa, choosing the right marker while the Italians chose the left. That allowed Luna Rossa to spend longer on the favored gybe but the British boat held its advantage. It gybed back to the left and then, almost laying mark came back on port and just squeezed across Luna Rossa’s bow.

“It looked good initially out of the gybe and it looked good most of the way across,” Ainslee said. “Then we both went for a soak mode so I guess their soak mode was a little better than ours with the cunningham off. So it was about as close as you want to get it.”

Fate of Polish judge hangs in balance as panel delibera ...