When Mike Lindell, better known to TV viewers as the MyPillow Guy, went to the White House last week to try to persuade President Donald Trump to keep pushing bogus theories about the election, he came away disappointed. Unexpectedly, Trump passed him — and his claims about sabotaged voting machines — off on staffers. But the Trump true believer says he has something from Trump that softens that blow: the promise of an endorsement.

The president has told him before that he would back his bid for governor of Minnesota, Lindell told The Associated Press. “Mike, if you did it, I would get behind you,” Lindell said Trump told him.

It's a prospect that sends shivers down the spines of some Republicans in the state — where Trump lost by 7 percentage points — and cuts to the heart of the national party's existential crisis. While many Republicans, particularly those in Washington, are eager to move on from the former president and his personality-driven, racially divisive politics, Trump's acolytes across the country are already preparing to pick up the torch. 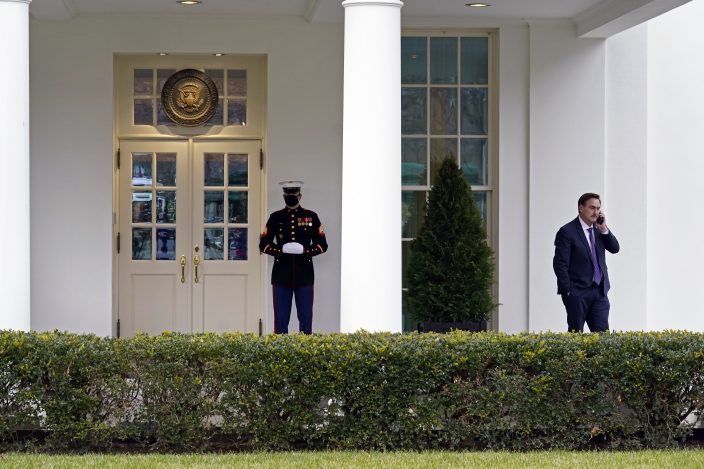 FILE - In this Jan. 15, 2021 file photo, Michael Lindell, CEO of My Pillow, Inc., waits to go into the West Wing of the White House in Washington. Lindell, is weighing a run for governor in Minnesota. If he follows through on a campaign, it could be an early test of where the Republican Party is headed in the post-Donald Trump era. (AP PhotoGerald Herbert File)

GOP state parties across the country are starting to look ahead to divisive primary fights that will test Trump's hold on Republican voters. In Wyoming, GOP Rep. Liz Cheney drew a primary challenge shortly after voting to impeach Trump for his role in the deadly riot Jan. 6 at the U.S. Capitol. And in Virginia, which holds its governor's election this year, a Trump-style Republican, state Sen. Amanda Chase, is running for the party's nomination, even as she was recently stripped of her committee assignments for comments calling the rioters “patriots."

In states like Virginia and Minnesota, there's little evidence that embracing Trump is a path to success for Republicans. Trump lost Virginia by 10 percentage points in November. And despite repeated visits and millions spent in Minnesota, Trump's campaign tanked in the state, as suburban voters around the Twin Cities soundly rejected him.

“The Republican brand has become toxic in the eyes of too many young people, formerly supportive suburbanites, women and diverse voters," said former Gov. Tim Pawlenty, an establishment Republican who lost a comeback run for governor in 2018. 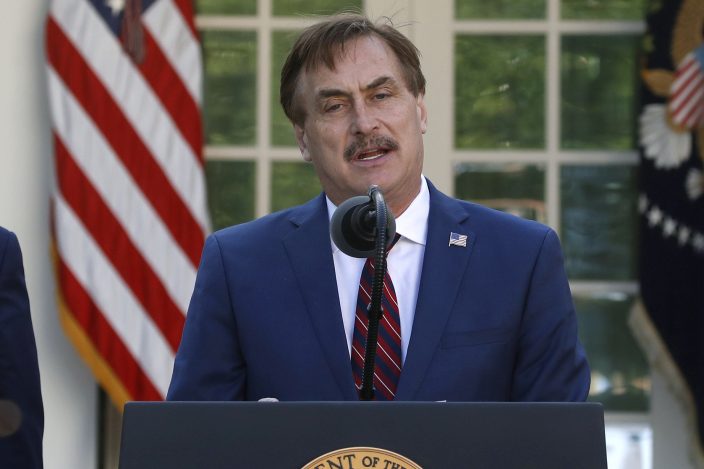 FILE - In this March 30, 2020 file photo, My Pillow CEO Mike Lindell speaks about the coronavirus in the Rose Garden of the White House in Washington. Lindell, an avid supporter of President Donald Trump, who has continued to push the notion of election fraud since Trump lost to Joe Biden in the presidential election in November, said his products will no longer be carried in the stores of some retailers, including Bed Bath & Beyond and Kohl's. (AP PhotoAlex Brandon)

“We don't need to guess how a general election campaign will go here for any candidate viewed mostly as a Trump proxy. Trump lost here twice and it wasn't even close the second time.”

Still, after four years of Trump's leadership, it's not easy finding an active Republican in the state who hasn't aligned with Trump. The field of Republicans considering campaigns is dominated by pro-Trump conservatives.

They include state Senate Majority Leader Paul Gazelka, a soft-spoken insurance agent who joined many Republicans around the country in fighting governors' lockdown orders and COVID precautions, even as a Republican state senator died of complications from COVID-19 that he may have contracted at a party event. Also on the list is former state Sen. Scott Jensen, a doctor who has suggested that the COVID-19 toll has been inflated; U.S. Rep. Pete Stauber, who backed some efforts to overturn the election results before ultimately voting to affirm Biden’s victory; and former Minnesota Vikings lineman Matt Birk, a religious conservative who declared publicly he wouldn’t take the coronavirus vaccine.

Lindell is a distinctly Trump-era figure. Just a few years ago, he was best known for campy late-night infomercials to sell his pillows, and for his frequently told back story of overcoming crack cocaine addiction. He said he wasn't political until he met Trump in 2016, connected with a fellow businessman and soon became a vocal Trump true believer and donor.

By his own estimate, Lindell was a warm-up speaker at more than 60 Trump campaign rallies, drawing frequent shout-outs from the president and co-chairing Trump's Minnesota campaign.

As the coronavirus crisis deepened, Lindell caught flak in August for championing the unproven treatment of oleander after investing in a company that produced a compound from it.

Then, after the election, Lindell shared Trump's refusal to accept Biden as the winner. Many of his claims about the outcome were labeled by Twitter as disputed. He posted but later deleted a tweet in December calling on Trump to declare martial law and seize the ballots and voting machines in seven key states. While he said he opposed the Capitol insurrection, MyPillow’s logo was prominently featured on a website that promoted the Jan. 6 Trump rally that preceded the riot. Lindell has claimed “antifa” was responsible for the riot, even though authorities say there’s no evidence of that. He said he’s still holding out hope that the U.S. Supreme Court would somehow put Trump back in office.

And he believes his unflinching support for Trump would be a strong asset if he runs for the GOP nomination to challenge Democratic incumbent Tim Walz.

“Of course it would help. Why wouldn't it help? The guy was the best president in history," Lindell said, praising Trump's response to the pandemic and his economic policies.

Lindell would come to the race with name recognition from his TV ads, which run frequently on Fox News and other channels. And he presumably could at least partly self-fund his campaign, though he claimed not to know his net worth and said he had no idea what a run for governor would cost.

Veteran GOP operative Gregg Peppin, who isn't working for any potential gubernatorial candidate so far, said “some of the less believable stories” that Lindell has embraced certainly wouldn't help him in the general election.

Former Republican operative Michael Brodkorb, a former deputy state party chairman, went even further, saying it would be a disaster for the party if Lindell is its candidate against Walz.

“While Republicans have gained some seats in a patchwork across the state, winning statewide has been a much trickier puzzle for them to solve," Brodkorb said. "It bends any political logic that Mike Lindell is going to be any key to helping Republicans solve that puzzle. He has done everything since the election to perpetuate what we now know are dangerous statements.”

As Lindell weighs a run, his immediate future includes business and potential legal challenges. His amplification of Trump’s false claims of election fraud led some major retailers, including Bed Bath & Beyond and Kohl’s, to discontinue MyPillow products. And the parent company of Dominion Voting Systems, which has already sued pro-Trump lawyer Sidney Powell for defamation, has demanded that Lindell retract his accusations that its voting machines played a role in Trump’s loss.

Lindell said he's not worried. It's the retailers' loss if they succumb to pressure, he said. And he said he won't let up on Dominion.

“You bring it on, Dominion, because I want everybody to see,” he said.