People following a violent movement that promotes a second U.S. civil war or the breakdown of modern society have been showing up at recent protests across the nation armed and wearing tactical gear. But the anti-government “boogaloo” movement has adopted an unlikely public and online symbol: the so-called Hawaiian shirt.

The often brightly colored, island-themed garment, known in Hawaii as an aloha shirt, is to people across the world synonymous with a laid back lifestyle. But in Hawaii, it has an association with aloha — the Native Hawaiian spirit of love, compassion and mercy.

The shirts are being worn by militant followers of the boogaloo philosophy — the antithesis of aloha — at demonstrations about coronavirus lockdowns, racial injustice and, most recently, the presidential election. 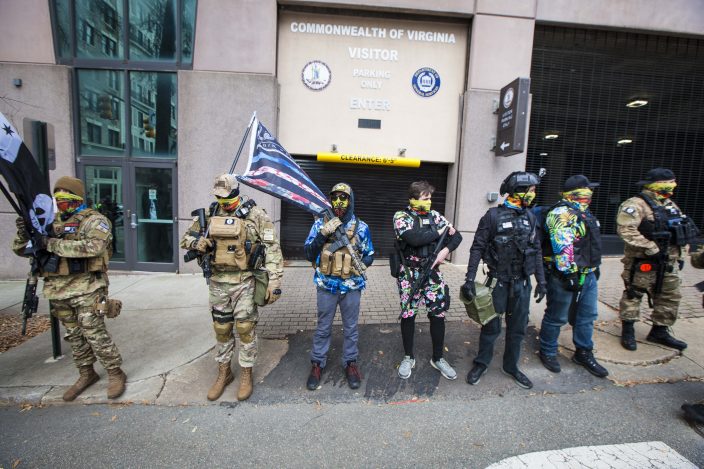 FILE - In this Jan. 18, 2021, file photo, men wearing Hawaiian shirts associated with the boogaloo movement stand on a sidewalk in Richmond, Va. People following the anti-government movement, which promotes violence and a second U.S. civil war, have been showing up at protests across the nation armed and wearing tactical gear. But the boogaloo movement has also adopted an unlikely public and online symbol: Hawaiian print shirts. (AP PhotoJohn C. Clark, File)

Boogaloo is a loosely affiliated far-right movement that includes a variety of extremist factions and political views. The name is a reference to a slang term for a sequel -- in this case, a second civil war.

“You have everyone from neo-Nazis and white nationalists to libertarians,” said Cassie Miller, a senior research analyst at the Southern Poverty Law Center, which tracks hate groups in the U.S. "And while ideologically there might be some differentiation among people who identify with the movement, what unites them is their interest in having complete access to firearms and the belief that the country is heading towards a civil war.”

Miller said those who follow boogaloo, sometimes referred to as “Boogaloo Bois,” believe that "people need to rise up against the government, which they see as tyrannical and essentially irredeemable, and that the only solution to righting what they see as their perceived grievances is to overthrow the state.” 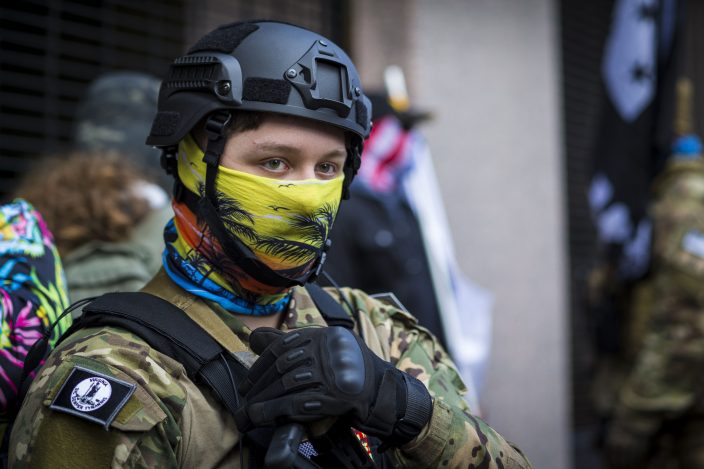 FILE - In this Jan. 18, 2021, file photo, a man wearing a Hawaiian pattern face mask attends a rally in Richmond, Va. People following the anti-government "boogaloo" movement, which promotes violence and a second U.S. civil war, have been showing up at protests across the nation armed and wearing tactical gear. But the movement has adopted an unlikely public and online symbol: Hawaiian print shirts. (AP PhotoJohn C. Clark, File)

Those adhering to the philosophy often target law enforcement, Miller said, because the police are the most accessible symbol of the government at public gatherings.

“If you look at their online spaces, their rhetoric is extremely violent," Miller said. "A lot of it is kind of under this veneer of irony and humor, but there’s something very real to all of it.” 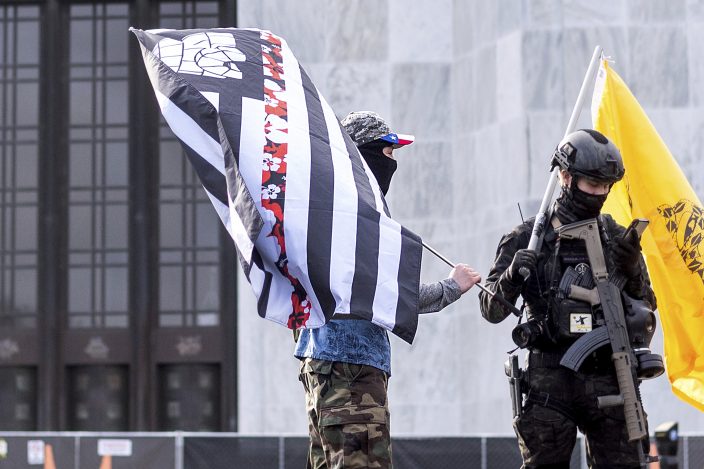 A protester, left, who declined to give his name, stands outside the Oregon State Capitol with a flag associated with the boogaloo movement using a Hawaiian flower print as a stripe on Sunday, Jan. 17, 2021, in Salem, Ore. People following a movement that promotes violence and a second U.S. civil war have been showing up at protests across the nation armed and wearing tactical gear. But the anti-government "boogaloo" movement has adopted an unlikely public and online symbol: Hawaiian print shirts. (AP PhotoNoah Berger)

When social media sites began banning the use of the word “boogaloo” and those associated with the movement, followers started using different terms to mask their online identities and intentions.

“They’ll adopt a slogan that sounds benign in order to evade scrutiny, in order to evade bans. And so with the boogaloo, what you got is sort of variations of that term showing up in online spaces," Miller said. “One of them was ‘big luau,’ and that is then what led to using Hawaiian imagery and then the Hawaiian shirts.”

Miller added that she doesn't believe “they’re really thinking about the meaning of the symbols that they’re using.” 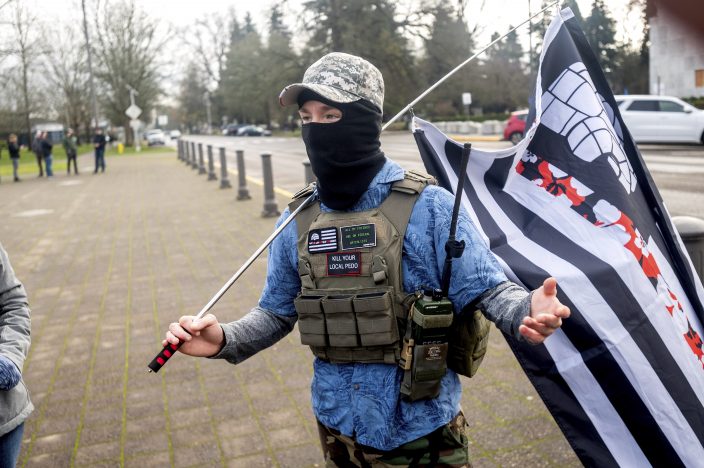 A protester who declined to give his name stands outside the Oregon State Capitol wearing a Hawaiian shirt and carrying a flag with a Hawaiian flower print on one stripe, both symbols associated with the boogaloo movement, on Sunday, Jan. 17, 2021, in Salem, Ore. People following the boogaloo movement, which promotes violence and a second U.S. civil war, have been showing up at protests across the nation armed and wearing tactical gear. But the anti-government movement has also adopted an unlikely public and online symbol: Hawaiian print shirts. (AP PhotoNoah Berger)

"For them, it’s a reference to show that they’re in the know that they’re part of this culture, that they can identify each other at public gatherings like this. And I think that’s really how it functions. It is creating kind of a sense of camaraderie.”

But to those who live in Hawaii, especially Native Hawaiians, the aloha spirit attached to the commercialized patterns on the shirts has deeper meaning.

"It creates the space for compassion to come into our heart, rather than the contrary of that, which would be hate, loathing, anti-Semitism, you know, racism,” Pisciotta said.

Many Native Hawaiians share a sense of frustration with U.S. and state government because of the way the Hawaiian Kingdom was overthrown. They have long fought against the exploitation and commercialization of their land by large corporations and government entities, but in a mostly peaceful way.

“Hawaiians are facing desecration of our burials ... of our sacred places. But it’s in our choice of how we want to respond and address the powers that be," Pisciotta added. "If you want the end result to be based in peace, then you have to move in peace and move in aloha.”

"Aloha is about also reducing suffering, reducing, deescalating anger,” she added. "It’s human to become angry, it's human to feel frustrated. It’s human to want to lash out. But but it’s also human to find compassion.”

Dale Hope, whose parents owned a garment factory in Honolulu that he went on to run and create quality aloha shirts with an eye toward detailed and authentic Hawaiian imagery, said the imagery being used at protests among extremists is misguided.

“I don’t think they really understand the value and the meaning of what these shirts represent,” he said. “I think they’re an easy way for them to stand out in the crowd and to get a lot of attention. But I don’t I don’t think they have a clue as to what the meaning and the virtues of aloha are with love and compassion and sharing.”

Hope wrote the book “The Aloha Shirt" about the early days of the textile industry in Hawaii and the meaning behind the aloha symbolism.

Aloha shirts first emerged in Hawaii in the 1930s and became accepted business wear locally in the 1960s.

They often feature island motifs such as native plants, ocean waves and other scenes that play a prominent role in Native Hawaiian legends and hula chants. Some also show Chinese calligraphy or Japanese carp, reflecting the many cultures that have shaped modern Hawaii.

Hope said some designers in Hawaii go out and chant and ask Hawaiian gods for respect before they begin the process of making the symbols on the shirts.

“We’ve always tried to do things with respect and honor, whatever the subject is that we’re trying to portray on a piece of textile," Hope said. “I think the aloha shirt is a representation of your passion and your love for this wonderful place that we call home. Hawaii is a unique, wonderful group of islands out in the middle of the Pacific."