Embattled Roma gained some relief with a 4-3 win over visiting Spezia in Serie A on Saturday.

Borja Mayoral scored twice and Rick Karsdorp also found the target for the Giallorossi, who were without captain Edin Džeko due to an apparent feud with coach Paulo Fonseca. 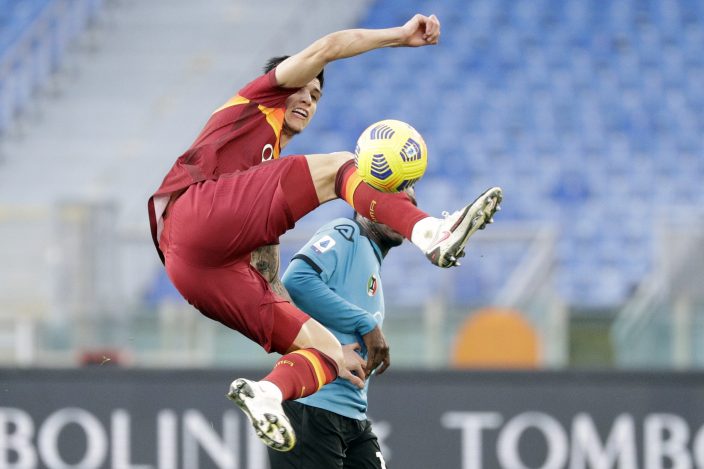 Roma's Roger Ibanez reaches for the ball ahead of Spezia's Emmanuel Gyasi during the Serie A soccer match between Roma and Spezia at the Rome Olympic Stadium Saturday, Jan. 23, 2021. (AP PhotoGregorio Borgia)

Roma was beaten 3-0 by Lazio in last week’s league derby and then lost 4-2 to Spezia in the Italian Cup on Tuesday. On Friday, the Cup defeat result was changed to a 3-0 loss by the league judge due to an impermissible sixth substitution that Roma used.

The recent results have led to speculation that Fonseca is at risk of losing his job.

Roma players celebrated wildly after Pellegrini’s goal, which was the product of work from Leonardo Spinazzola and Bruno Peres, whose chest pass left a clear look for Pellegrini from close range. 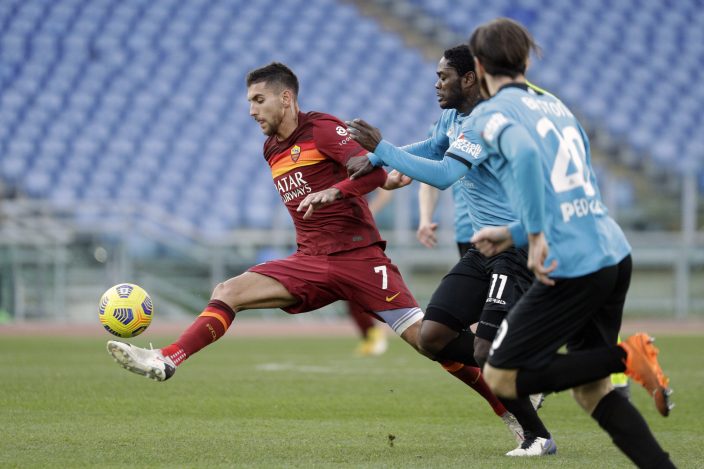 Roma's Lorenzo Pellegrini reaches for the ball during the Serie A soccer match between Roma and Spezia at the Rome Olympic Stadium Saturday, Jan. 23, 2021. (AP PhotoGregorio Borgia)

Roma strengthened its third-place position and moved within six points of league leader AC Milan and only three points behind Inter Milan.

Milan was hosting Atalanta later and Inter was playing at Udinese.

Roberto Piccoli and Diego Farias also scored for Spezia, which is playing in the top division for the first time. Spezia was left four points above the drop zone.

Students, teachers and relatives a ...

Lazio moves 4th in Italy with 1-0 win over Sampdoria

Roma beats Udinese to move into 3rd ahead of Inter vs. Lazio

Bologna, Benevento draw 1-1 and swap places on Serie A table