The prospect of winning prize money isn’t what brings high jumper Vashti Cunningham, sprinter Andre De Grasse and other top names in track to an indoor meet in Arkansas this weekend.

Because there is none.

Instead, the athletes are going for something that feels every bit as valuable these days, and could even lead to an Olympic gold medal. It’s actual competition — much in demand with the coronavirus pandemic shutting down large swaths of their sport, and with the Tokyo Games rapidly approaching in July. 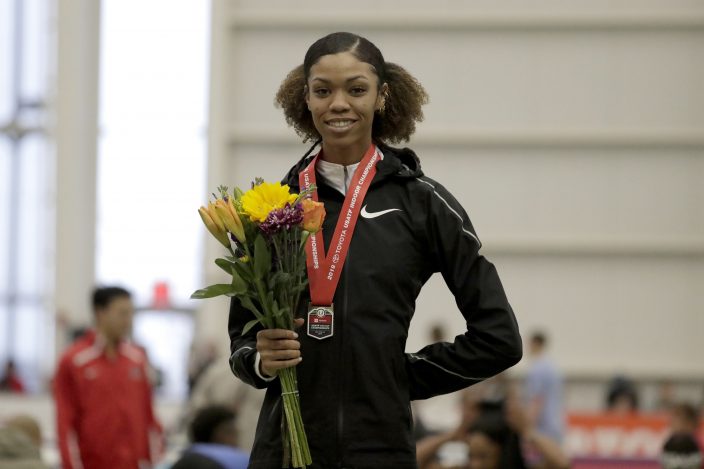 FILE— In this Feb. 23, 2019, file photo, Vashti Cunningham poses for photographers after winning the women’s high jump final at the USA Track & Field Indoor Championships in New York. Cunningham is one of the athletes who will be competing in the American Track League, which opens a four-week-long series on Sunday, Jan. 24, 2021 in an indoor setting at the University of Arkansas. (AP PhotoJulio Cortez. File)

The American Track League begins a four-week indoor series Sunday at the University of Arkansas. It’s a chance for athletes to see how they stack up in a time when COVID-19 has made training sometimes difficult and traveling overseas for meets almost unthinkable.

The league — founded in 2013 to provide a condensed, fast-paced meet format — doesn’t have a major sponsor at the moment and will operate on a shoestring budget, meaning no prize money for the winners as of now. 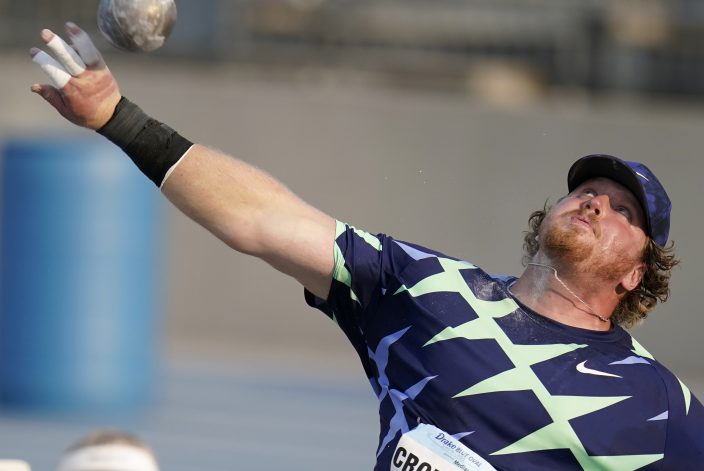 FILE—In this Aug. 25, 2020, file photo, Ryan Crouser puts the shot during the Blue Oval Showcase in Des Moines, Iowa. Crouser is one of the athletes who will be competing in the American Track League series, which begins a four-week run on Sunday, Jan. 24, 2021 in an indoor setting at the University of Arkansas. (AP PhotoCharlie Neibergall, File)

“Everyone is so hungry to compete,” meet organizer/agent Paul Doyle said by phone.

Doyle has assembled a star-packed field of mostly North Americans. There's Cunningham, the bronze medalist at the 2019 world championships, along with De Grasse, a three-time Olympic medalist for Canada. There's also 2016 Olympic shot put champion Ryan Crouser, who trains at Arkansas, and Omar McLeod, the Olympic 110-meter hurdles champion representing Jamaica who once starred at Arkansas.

There will be plenty of exposure, with all four competitions — held on consecutive Sundays — televised on ESPN networks. The lineup of events changes, too, with a few — men's and women's 60 meters — contested all four weeks.

The amount of support for the meet has astonished Doyle. From fellow agents to athletes to coaches, everyone's on board.

“Athletes that would typically be getting $20,000 to $30,000 to show up and race are coming just because they want to race,” Doyle said. “They’re actually thankful for the opportunity, which blows my mind and makes me really humbled."

Doyle hoped to line up enough sponsors to reward the winners because it's "never the intention to have athletes run for free." But in this economy, it didn't pan out.

To save on expenses, he’s actually hauling track and field equipment from Atlanta to Fayetteville, Arkansas, in his camper.

Anything to stage a meet.

Usually around this time, athletes are starting to prepare their calendars for European meets and the Diamond League series. Given the travel restrictions, lining anything up has been increasingly difficult.

“The meet directors can’t risk (an invitation) by saying, ‘Let’s commit to four or five North American athletes at each event,’ only to find out three days before they can’t get on the plane," Doyle said. “We end up with no opportunities for North American-based athletes.”

This meet also provides good exposure for the athletes' sponsors — and potential sponsors.

“A lot of athletes are in limbo, with contracts that ended,” explained Crouser, who renewed a deal with Nike. “They're wanting to compete and show sponsors, ‘Hey, I haven’t just been sitting on the couch for the last 10 months. I’ve been working hard.'”

It's also a chance to “dust these cobwebs off,” said American sprinter/hurdler Keni Harrison, especially with the Olympic Trials just five months away. This will be Harrison's first competition since July.

She’s looking forward to racing in the 60- and 300-meter events Sunday to test her new sprint technique, the one she’s been honing during the pandemic.

"I’ve been putting in some great work and it will be nice to finally see where we’re at and then get ready for the outdoor season,” said Harrison, the world record holder in the 100 hurdles who trains in Texas. “It’s really important to get back to the competition again.”

Her goal: To win, of course.

Crouser's staring at a number: 22.66 meters (74 feet, 4¼ inches), which happens to be the longstanding world indoor shot put record.

“I'm in good shape to throw far," Crouser said. “For me and the other athletes, we’re all just happy to compete and showcase the diligence and dedication we have through this difficult time.”