Marcus Sasser and Quentin Grimes each scored 15 points and No. 8 Houston rolled to its sixth straight win, 68-51 over Temple on Saturday.

The Cougars (13-1, 8-1 American Athletic Conference) also beat the Owls on Dec. 22 and completed the season sweep in a rout. Grimes and Sasser hit consecutive early 3s to build a 19-point lead en route to win a hastily scheduled game because of COVID-19 issues.

This game was originally scheduled for Feb. 8, but when Houston’s game with Cincinnati was postponed, Temple and Houston got bumped up to fill the CBS spot. CBS broadcast a game from the Liacouras Center for just the second time in program history — and the Owls were not ready for the spotlight. 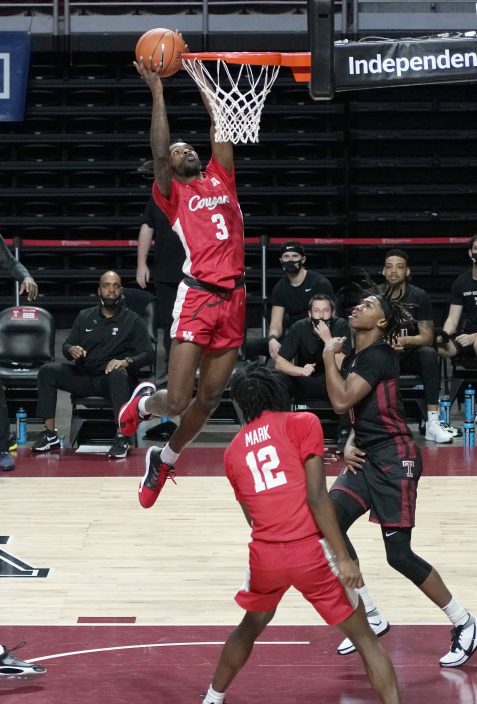 The Owls, though, were just grateful to get a chance to hit the court, considering Houston played its 14th game while Temple (3-4, 2-4) played only its seventh. So it goes this season, as college basketball tries to navigate schedules upended by the coronavirus pandemic.

The Owls had fits of good ball movement but couldn’t finish at the rim and hit just about nothing from outside. The Owls made just nine of 28 shots (one 3-pointer) in the first half as Houston grabbed a 36-21 lead.

Under coach Kelvin Sampson, the Cougars again got solid games out of perhaps the best backcourt in the AAC in Grimes (17.8 points) and Sasser (16.5). They each hit three 3s and Grimes had nine rebounds. The Cougars, a 12-point favorite, made 9 of 20 3-pointers (45%). The Cougars' only loss of the season came when they missed 17 of 21 3s against Tulsa, and when they’re connecting from deep, they’re as tough to beat as any team.

The Cougars keep winning even as Caleb Mills, the preseason AAC player of the year, decided to enter the transfer portal earlier this month, leaving them without their leading scorer from last season. Houston reached as high as No. 5 in the AP Top 25 and remain the favorite in the AAC.

Jake Forrester led the Owls with 15 points and Khalif Battle had 14. The Owls had won back-to-back games in coach Aaron McKie’s second season as they started to get into a rhythm following the fits and starts of postponements.

But Houston wiped out the good feelings.

Justin Gorham hit a 3 off the break for Houston, fell into his bench and was helped up by his teammates, who stood, clapped and cheered the entire game. Gorham, who had 14 points and 10 rebounds, had a rim-shaking slam off the break to make it 62-41 and Houston again stamped its case for a No. 1 seed in the NCAA Tournament.

Houston: The Cougars led the nation in offensive rebounding percentage and grabbed seven of them (37 overall).

Temple: The Owls have defeated a ranked team for 13 consecutive seasons. They beat No. 16 Wichita State last season, but there are no currently ranked teams left on the schedule, so that streak is in jeopardy.

The Cougars could move up a spot or two if some of the teams ahead of them lose this weekend.

The Owls host Tulsa on Tuesday.