Eden Hazard scored and set up Karim Benzema for his first of two goals as Real Madrid eased to a 4-1 victory at Alavés in the Spanish league on Saturday, ending a winless run in a match that coach Zinedine Zidane missed after he contracted the coronavirus.

Hazard grazed a long pass to redirect it to Benzema to double the lead for Madrid in the 41st after Casemiro had headed in the 15th-minute opener.

The Belgium forward scored just his third goal of the season in first-half injury time to build a 3-0 lead at the break. Toni Kroos recovered possession in midfield and met Hazard’s run behind a disordered defensive line to score past goalkeeper Fernando Pacheco. 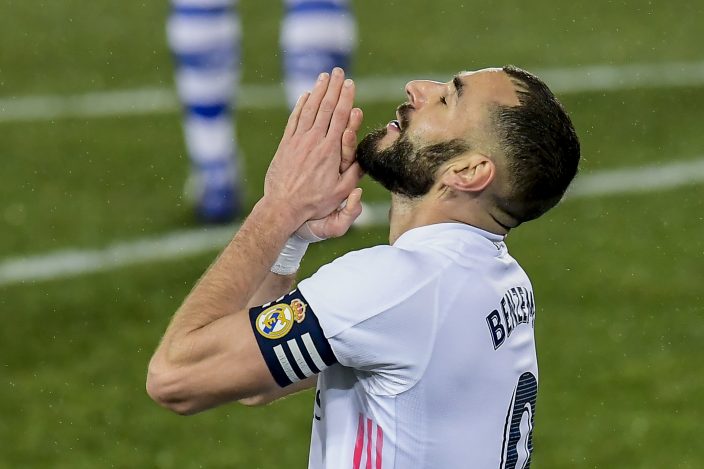 Joselu Mato pulled one back for Alavés on the hour-mark when he headed in Lucas Pérez's free kick.

Benzema made it a brace in the 70th after Luka Modric played him clear on the break. The French striker cut back inside the last defender before firing in his 10th goal in the league this campaign.

Second-place Madrid reduced the gap to leader Atlético Madrid to four points. Atlético has two games in hand, starting with its home match against Valencia on Sunday. 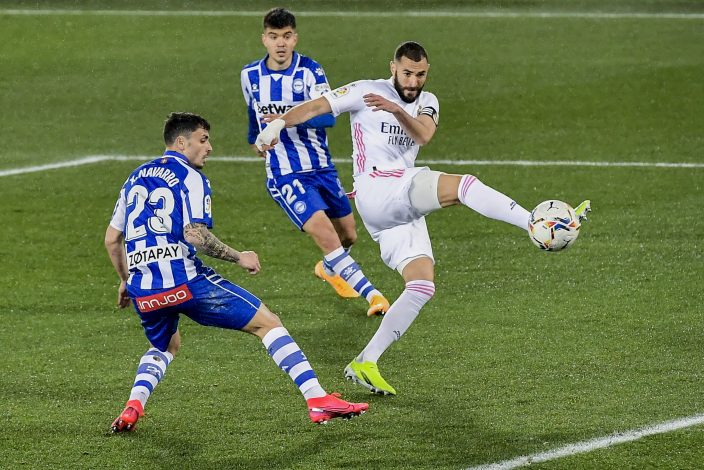 The promising performance by Hazard comes amid growing impatience shown by Madrid’s fans, and some unfavorable comparisons in the Spanish sports media to former star Gareth Bale, who was also injury prone. Hampered by injuries, the 30-year-old Hazard has not lived up to the club-record 100 million euros ($113 million) fee plus add-ons two seasons ago.

The win over struggling Alavés came after Madrid had lost two chances for titles in recent days and dropped points in two of its last three league games. After being held 0-0 at Osasuna in the league, Madrid lost to Athletic Bilbao in the Copa del Rey semifinals and was dumped from the Copa del Rey on Wednesday in a 2-1 loss at third-tier Alcoyano, which scored the winner with 10 men.

Alavés, which was celebrating the 100th anniversary of its foundation, was left one point above the relegation zone in a third consecutive loss under new coach Abelardo Fernández.

EYE ON THE PRIZE

Youssef En-Nesyri scored a hat trick to lead Sevilla to a 3-0 win over Cádiz, lifting the Andalusian side past Barcelona and into third place.

En-Nesyri has 12 goals in 19 rounds and leads the league scoring charts. The Morocco striker also scored a treble two weeks ago. He has another four goals this season in the Champions League, where Sevilla plays Borussia Dortmund in the round of 16 next month.

En-Nesyri opened the scoring in the 35th after Jesús “Suso” Fernández’s shot hit the post and fell for him to finish off. His second and third goals were from headers in the 39th and 62nd.

On his second goal, En-Nesyri said that he could only see from one eye after taking a knock in the other one. But that did not stop him from meeting Suso’s free kick sent near the penalty spot for the striker to head through the crowded area and into the net.

“I knew the set piece was for me and I had to execute it, so I scored the goal with one eye open,” En-Nesyri said.

After its sixth win in nine rounds, Sevilla moved two points ahead of Barcelona, which visits Elche on Sunday.

At age 39, Joaquín Sánchez proved he can still turn games around for Real Betis. He came on in the 78th and set up one goal before scoring a stoppage-time equalizer in a 2-2 draw with Sociedad.

Coach Imanol Alguacil slung his coat into the dugout after seeing his team squander a two-goal lead and an overall dominant performance because of Betis’ inspired final push led Joaquín.

Sociedad striker Aleksander Isak rifled a shot under goalkeeper Joel Robles shortly after halftime to put the hosts ahead. Isak next set up Mikel Oyarzabal to chip a second goal over Robles in the 57th.

But Joaquín curled in a cross for Sergio Canales to head home in the 85th. The veteran forward clinched the draw two minutes into injury time when fellow substitute Cristián Tello sped past his marker and found Joaquín in the area. He redirected the pass toward the goal and the shot took a deflection off a defender to leave ’keeper Álex Remiro stranded.

“That is what Joaquín does, he changes everything. He and Tello and the others that came off the bench gave us life,” said Canales, who got his seventh league goal of the season.

Sociedad will have a chance to avenge the loss on Tuesday when it visits Betis in their round-of-16 clash in the Copa del Rey.

Also, fifth-place Villarreal pulled level with Barcelona on points after a 0-0 draw with last-place Huesca. Barcelona is ahead of Villarreal on goal difference.

Messi provides 2 assists for Barça ahead of Madrid derby

Messi leads Barcelona to win over Elche in Spanish league