Torey Krug scored his first goal with St. Louis and David Perron added a goal and an assist, lifting the Blues to a 4-2 victory Saturday night over the Los Angeles Kings.

Adrian Kempe and Dustin Brown scored for the Kings, who were playing in their first road game of the season. Vince Dunn and Jaden Schwartz scored the other goals for St. Louis.

Jordan Binnington has started all five games for the Blues and is 3-1-1. He stopped 21 shots. 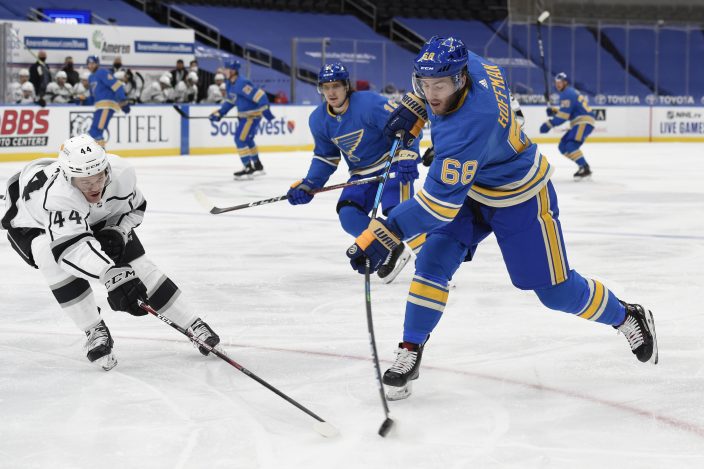 Kings backup goalie Calvin Petersen made his second start of the season and stopped 25 shots.

St. Louis recorded its first power-play goal of the season when Krug scored at 13:12 of the first period. Krug, who signed a seven-year deal as a free agent last October after playing seven full seasons for Boston, scored on a one-timer from the point. Assisting on the goal were Perron and Ryan O’Reilly. It was O’Reilly’s 100th assist as a member of the Blues.

St. Louis entered the game having not scored a power-play goal in its previous 14 chances this season. The Blues' power play had gone 5 for its last 6 against the Kings entering the game. Each team scored twice in the second period.

The Kings tied the game 1-1 just 57 seconds into the period. Kempe scored his third goal on a slap shot from the top of the left circle.

St. Louis came back with two goals to take a 3-1 lead. Dunn snapped in a wrist shot from the top of the slot at 2:53 for his first goal. Perron hit a wrist shot at 7:25 from the crease after getting a nifty no-look backhand pass from Robert Thomas, who also assisted on Dunn’s goal. 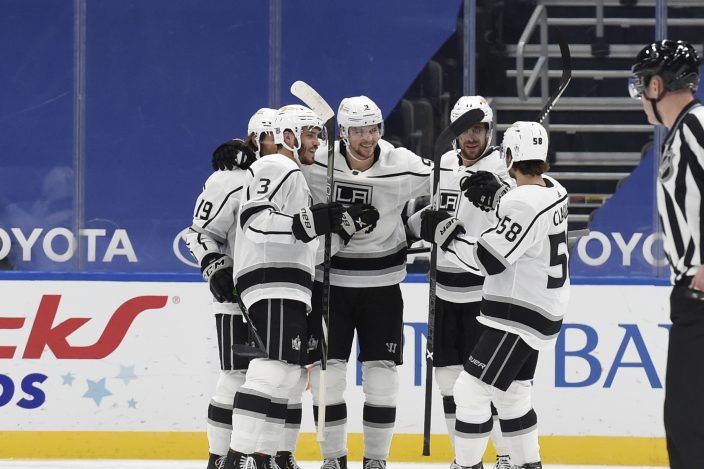 Los Angeles Kings' Adrian Kempe (9) is congratulated by teammates after scoring a goal against the St. Louis Blues during the second period of an NHL hockey game Saturday, Jan. 23, 2021, in St. Louis. (AP PhotoJoe Puetz)

Los Angeles enjoyed a two-man advantage and pulled within a goal at 3-2 when Brown pushed in the puck from the side of the net at 16:29 for a power-play goal.

The Kings had five power-play opportunities. 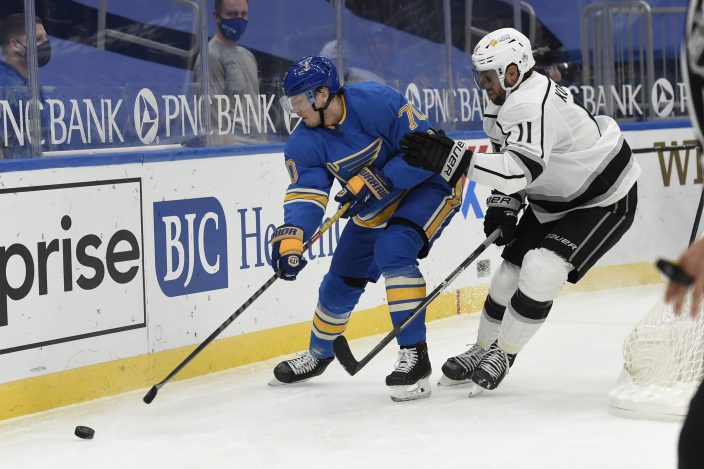 The Blues have won four straight against the Kings, outscoring them 16-5. 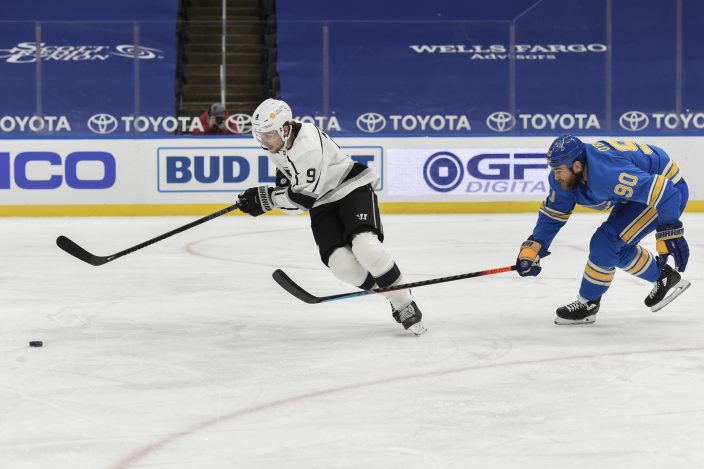 Heritage jerseys were back for the first of six Saturday night home games at Enterprise Center this season for the Blues. For the first time in franchise history, St. Louis will wear five different sweaters in the same season. Borrowing heavily from the team’s inaugural uniforms from the 1967-68 season, this jersey made its return at the 2017 Bridgestone NHL Winter Classic. The vintage sweater look features the original Blue Note emblem on top of a light blue base with original gold and white stripes along the sleeves and waistline.

Blues mascot Louie, a blue polar bear who wears a Blues jersey with his name on the back, and the numbers “00,” wore a big black face mask as he did his routines during the game.

The Kings and Blues will conclude their two-game series Sunday night in St. Louis.