James Harden finished with 12 points, 11 assists and seven rebounds as the Nets won for the first time with their three superstars playing together. They lost consecutive games with dismal defensive efforts in Cleveland and barely got enough stops to hold off a short-handed Heat team that had been limited to 81 points a night earlier.

But Irving helped pull them through, with 12 points in the final 5:48 after the Heat had erased nearly all of an 18-point deficit. 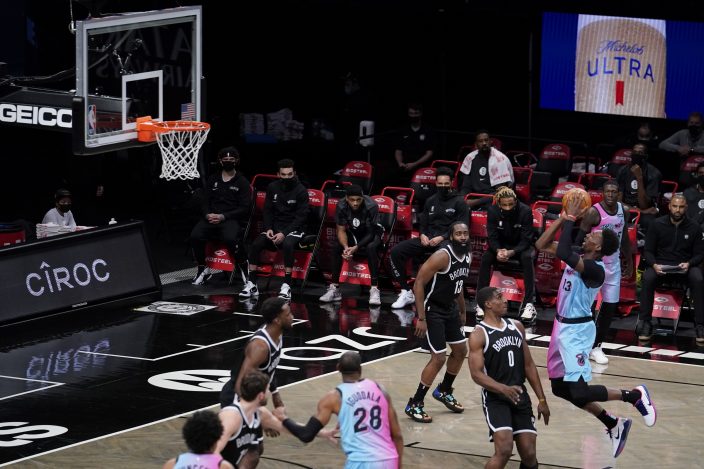 Goran Dragic scored 19 points and Kendrick Nunn and Duncan Robinson each had 18 for the Heat, who remain without Jimmy Butler and Tyler Herro. Adebayo also had nine assists while blowing past his previous best scoring night of 30 points.

Durant was 5 for 5 and scored 13 points in the third quarter, with the last of his three 3-pointers in the period making it 96-80. Adebayo beat the buzzer with a jumper, than Miami opened the fourth with a 13-0 run to get within 96-95. 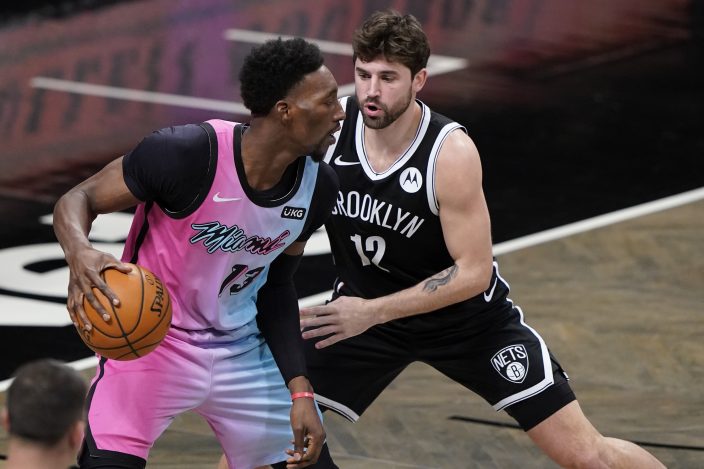 Irving, Harden and Durant quickly combined for eight straight points but Adebayo kept coming. and the Nets needed a couple of clutch baskets from Irving and late free throws to pull it out.

Harris had four 3-pointers and 12 points in the first quarter. The Nets were ahead 60-42 with a little more than two minutes left in the half, but Miami trimmed it to 66-56 on Adebayo's 3-pointer just before the buzzer.

Harden didn't have an official shot attempt in the first quarter. He finally attempted a shot with 0.7 seconds left and was fouled behind the arc, making all three free throws for a 36-25 lead. Heat: Moe Harkless started at forward but exited in the second quarter with a bruised left thigh after banging legs with a Nets player along the baseline. Miami used its 11th different starting lineup in its 15th game, while coach Steve Nash sent out a different first five for the 12th time in Brooklyn's 18 games. Part of that is because of player absences and part because he is still experimenting following the Harden trade, which he may still need to do before settling on his preferred starters.

“I'm not sure we’re there yet," Nash said. "It might be ideal to be there but I don’t know that we are, so I don’t want to commit to that yet.”