Pakistan has retained six uncapped players in its squad of 17 for Tuesday’s first test against South Africa in Karachi.

Three rookie batsmen — Kamran Ghulam, Abdullah Shafique and Salman Ali Agha — will remain with the team, but the Pakistan Cricket Board said they will not be considered for selection.

The selectors had initially announced 20 players for the two-test series but trimmed the squad to 17 for the first test at the National Stadium on Sunday. 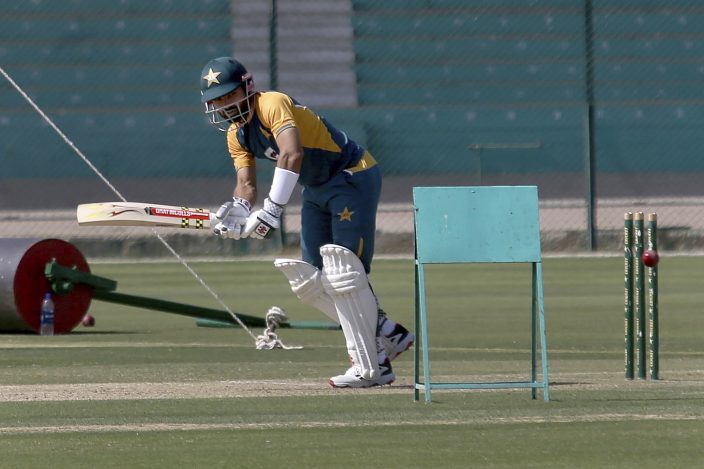 Pakistan's Mohammad Rizwan bats during a practice session for an upcoming cricket test match against South Africa at National Stadium in Karachi, Pakistan, Friday, Jan. 22, 2021. Pakistan will play the first test match on Jan. 26, against South Africa, which arrived in the southern port city of Karachi last Saturday for the first time in nearly 14 years. (AP PhotoFareed Khan)

The second test will be played at Rawalpindi from Feb. 8 and will be followed by a three-match Twenty20 series at Lahore from Feb. 11-14.

“We know the home conditions and we have a chance here to play good cricket and win,” Pakistan head coach Misbah-ul-Haq said during a virtual press conference on Sunday. 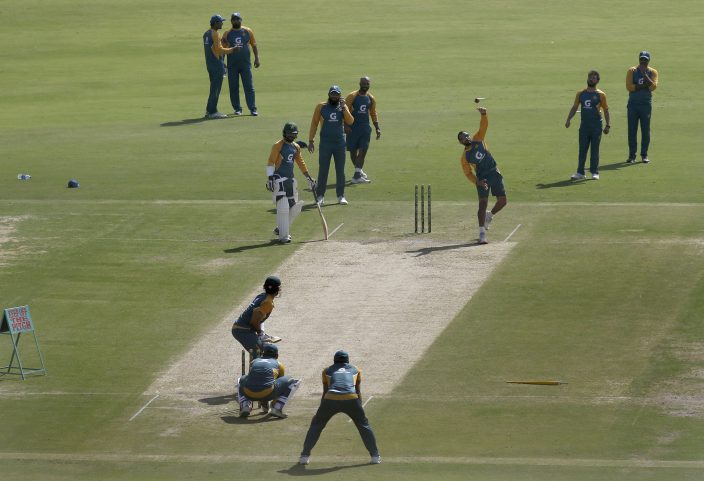 Players of Pakistan Cricket Team attend a practice session for an upcoming test match against South Africa at National Stadium in Karachi, Pakistan, Friday, Jan. 22, 2021. Pakistan will play the first test match on Jan. 26, against South Africa, which arrived in the southern port city of Karachi last Saturday for the first time in nearly 14 years. (AP PhotoFareed Khan)

Pakistan has lost only two out of 44 test matches played at the National Stadium and one of those defeats came against South Africa when it last toured in 2007. England is the only other team that has won in Karachi when it beat Pakistan by six wickets in 2000.

Misbah said Pakistan has to rectify its shortcomings in fielding to beat South Africa. Without the injured Babar, Pakistan lost a recent test series 2-0 in New Zealand when it dropped more than half a dozen catches. Pakistan police commandos stand guard outside the National Stadium, where the Pakistan Cricket Team is practicing for the upcoming test match against South Africa, in Karachi, Pakistan, Thursday, Jan. 21, 2021. Pakistan will play the first test match on Jan. 26, against South Africa's cricket team, who arrived in Karachi last Saturday for the first time in nearly 14 years. (AP PhotoFareed Khan)

“Of course I am not satisfied (with the performance in New Zealand), we have to improve it,” Misbah said.

The head coach and bowling coach Waqar Younis were summoned by the PCB’s cricket committee earlier this month and gave the coaching staff another opportunity to turn around the fortunes of the team in the home series against South Africa.

Since Misbah and Waqar took over in 2019, Pakistan won home test series against Sri Lanka and also won a test match at Rawalpindi against Bangladesh. However, they have a poor touring record, losing test series in Australia, England and New Zealand.

But Misbah appeared unconcerned about whether his three-year contract with the PCB would continue if Pakistan struggles against South Africa.

“I have played cricket under pressure throughout my life,” Misbah said.

“I know only one thing ‘keep concentrating on what’s in your end’ and I am not thinking about what’s going to happen (after the series against South Africa)."

Pakistan hopes to carry test form into T20s against SAfrica

Rizwan's 73no stretches Pakistan lead to 288 in 2nd test

Pakistan slips to 229-7 in 2nd test against SAfrica

Pakistan coach warns against complacency in 2nd test vs SA