Thousands of Brazilians took the streets for a second day on Sunday to call for the impeachment of President Jair Bolsonaro, who is under fire for his government's response to rampant cases of COVID-19, which has claimed more than 216,000 lives in the country.

Horn-honking cars paraded through the streets of Rio de Janeiro, Sao Paulo and a dozen or more other cities as other protesters marched on foot, some calling, “Get out Bolsonaro!”

Sunday's protests were called by conservative groups that had once backed the president, while those on Saturday had come from the left. 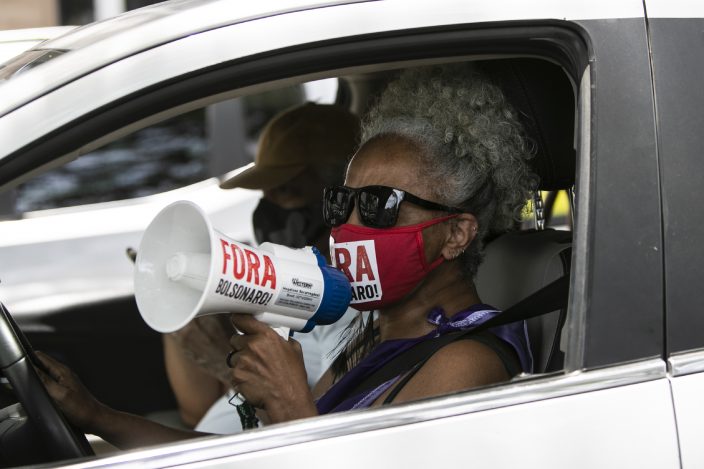 A demonstrator uses a bullhorn to shout slogans in a caravan to protest against the government's response in combating COVID-19 and demanding the impeachment of Brazil's President Jair Bolsonaro, in Rio de Janeiro, Brazil, Saturday, Jan. 23, 2021. (AP PhotoBruna Prado)

"When Bolsonaro arrived, we voted for him for his proposals that we found interesting, but the situation now with the pandemic is terrible”, said Meg Fernandes, a 66-year-old engineer who joined a protest in Rio on Sunday.

She said she was especially alarmed by the situation in the northern city of Manaus, where there's a waiting list for hospital intensive-care beds and a shortage of medical oxygen.

“I had already been disappointed last year, but now with the situation in Manaus, I think (this government ) has to stop," she said. "Bye, Bolsonaro.” 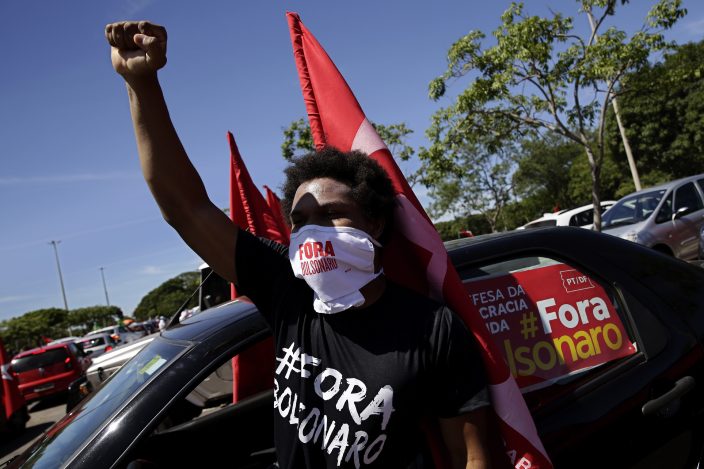 A demonstrator, wearing a protective face mask amid the new cornavirus pandemic, shouts "Out Bolsonaro" in protest against the government's response in combating COVID-19 and demanding the impeachment of Brazil's President Jair Bolsonaro, in Brasilia, Brazil, Saturday, Jan. 23, 2021. (AP PhotoEraldo Peres)

Thomaz Favaro, a political analyst at consultancy Control Risks, said Bolsonaro faces little risk of impeachment, though that could change if his allies lose a Feb. 2 vote for leadership of the lower house.

“Bolsonaro’s base in congress is unstable, but it is robust," he said, though it could be dented by the president's flagging popularity.

But he said impeachment would be "a nuclear option that changes the country’s political trajectory.”

Bolsonaro — who is midway through his four-year term — has faced renewed criticism in recent weeks both for the crisis in Manaus and for delays in launching Brazil's immunization campaign against COVID-19. The president has long resisted lockdown measures against the new coronavirus, arguing economic damage would be worse than the disease.

Brazil’s prosecutor-general, Augusto Aras, on Saturday asked the Supreme Court to open an investigation into Health Minister Eduardo Pazuello over the crisis in Manaus, capital of Amazonas state. Aras cited a document that said the ministry knew of a possible shortage of oxygen on Jan. 8, but didn't start sending extra supplies until Jan. 12.

A newly released Datafolha survey from Jan. 20-21 showed support for Bolsonaro fell to 37% from 31% in December, the biggest one-month drop since the start of his administration. The number terming his performance bad rose to 40% from 32%. The margin of error was two percentage points.

“We ask for an impeachment of Bolsonaro because it is not just a crime he committed. The way he treated the pandemic — He spent money on ineffective remedies instead of investing in the vaccine and in oxygen", said Tiago Sussekind, a 21-year-old law student who joined the Saturday protest in Rio.