George Armstrong, who captained the Toronto Maple Leafs to four Stanley Cups in the 1960s, has died. He was 90.

His death was announced Sunday by the Maple Leafs, who said he died of heart complications, citing his family.

Armstrong had 296 goals and 417 assists over 21 seasons for the Leafs, including 12 seasons as team captain, and remains the franchise's leader in games played, variously listed at 1,187 or 1,888. The right wing had 26 goals and 34 assists in 110 playoff games. 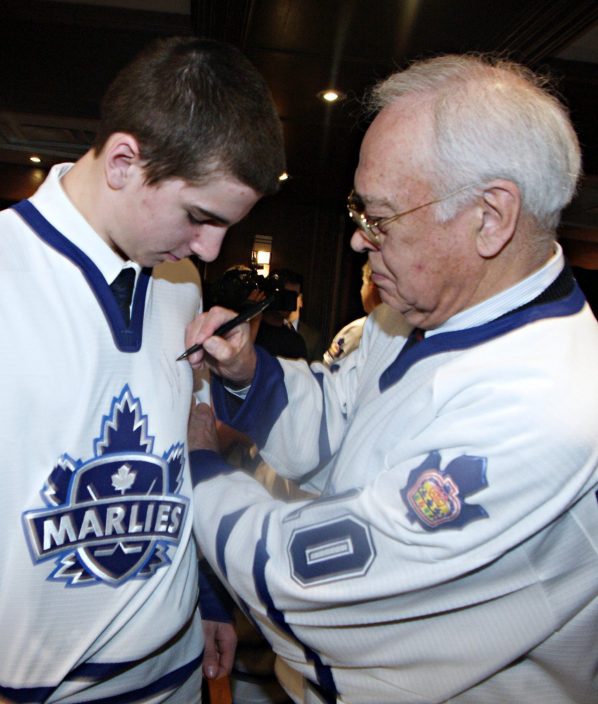 FILE - In this March 22, 2005, file photo, former Toronto Maple Leafs player George Armstrong, right, autographs a jersey for 14-year-old John Tavares after a new name and logo for the Maple Leafs AHL affiliate was unveiled in Toronto. Armstrong, who captained the Maple Leafs to four Stanley Cups in the 60s and wore the blue and white his entire career, has died. He was 90. The Maple Leafs confirmed the death Sunday, Jan. 24, 2021, on Twitter. (Frank GunnThe Canadian Press via AP, File)

Known as the “Chief,” Armstrong was one of the first players of Indigenous descent to play professional hockey.

He was inducted into the Hockey Hall of Fame in 1975. Some 41 years later, Armstrong was voted No. 12 on the franchise’s list of 100 greatest Maple Leafs in its centennial season.

“George is part of the very fabric of the Toronto Maple Leaf organization and will be deeply missed,” Maple Leafs president Brendan Shanahan said in a statement. 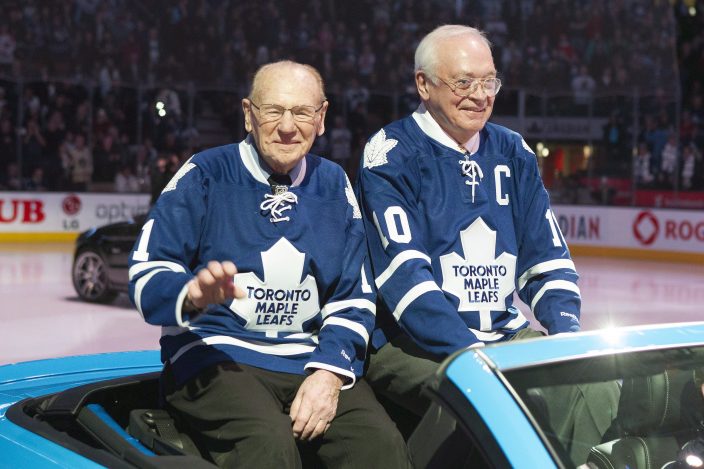 FILE - In this Feb. 16, 2013, file photo, former Toronto Maple Leafs players George Armstrong, right, and Johnny Bower are paraded around the ice at the 50th anniversary of the team's 1963 Stanley Cup victory ahead of a Maple Leafs game against the Ottawa Senators in Toronto. Armstrong, who captained the Maple Leafs to four Stanley Cups in the 60s and wore the blue and white his entire career, has died. He was 90. The Maple Leafs confirmed the death Sunday, Jan. 24, 2021, on Twitter. (Chris YoungThe Canadian Press via AP, File)

“A proud yet humble man, he loved being a Maple Leaf, but never sought the spotlight even though no player played more games for Toronto or captained the team longer. Always one to celebrate his teammates rather than himself, George couldn’t even bring himself to deliver his speech the day he was immortalized on Legends Row.”

Armstrong would become one of a few Leafs honored with a banner at Scotiabank Arena, and his number was retired in October 2016 at the team’s centennial anniversary home opener.

In 2015, Armstrong was added to the Leafs’ Legends Row. The team released a statement Sunday with the words from Armstrong’s unread speech that night. 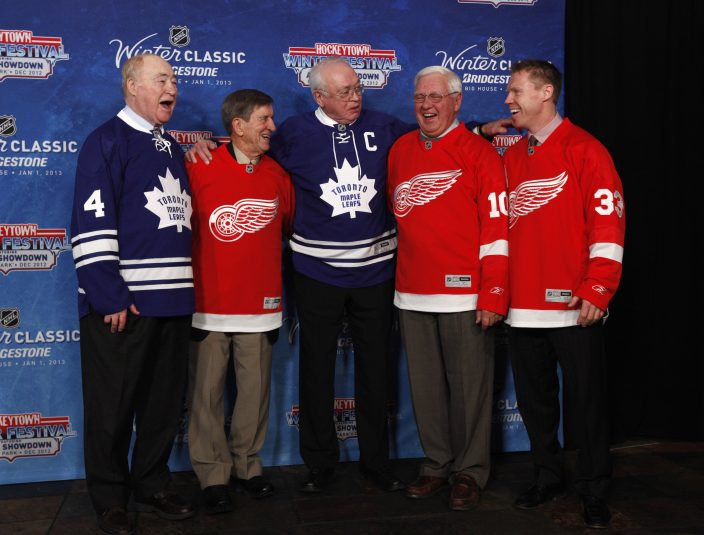 FILE - In this Feb. 9, 2012, file photo, National Hockey League alumni, from left to right, Red Kelly, Ted Lindsay, George Armstrong, Alex Delvecchio and Kris Draper pose during the announcement of the NHL Winter Classic hockey game at Comerica Park in Detroit. Armstrong, who captained the Maple Leafs to four Stanley Cups in the 60s and wore the blue and white his entire career, has died. He was 90. The Maple Leafs confirmed the death Sunday, Jan. 24, 2021, on Twitter. (AP PhotoPaul Sancya, File)

“Hockey is a great game and I love it. I am part of a fading generation that you will never have again. Every one of us is one of a kind, that will never be repeated. To all of my friends and acquaintances, thank you for your advice and direction, that helped make me who I am today ... a very, very happy person.”

“The National Hockey League family is saddened to learn of the passing of George Armstrong,” Bettman said in a statement. “For 70 years, he represented his beloved Maple Leafs and the entire NHL with class and distinction as a player, coach, executive and ambassador.

“A humble man and revered leader, Armstrong captained the Leafs for 12 seasons — including to three straight Stanley Cups in 1962, 1963 and 1964 and the stunning 1967 title — and scored the final goal of the Original Six Era in Game 6 of the ’67 Final.

“Our game will miss him dearly."

After retiring in 1971, Armstrong coached the Toronto Marlboros to Memorial Cup victories in 1972-73 and 1974-75 before accepting a scouting position with the Quebec Nordiques in 1978.

He spent nine years with Quebec before returning to Toronto as assistant general manager and scout in 1988. Armstrong served as interim coach for the final 47 games of the 1988-89 season after John Brophy was fired following an 11-20-2 start.

The next year, Armstrong returned to his role as a scout for the Leafs.

Armstrong scored 20 goals four times during his career but was better known for his leadership and work ethic, helping restore the franchise’s winning touch. A smart player and talented backchecker, he worked the angles to get the best shot at his opponent and formed a formidable penalty-killing tandem with Hall of Famer Dave Keon.

Born in Bowland’s Bay, Ontario, to an Irish father and an Iroquois mother, Armstrong honed his hockey skills near the nickel mines where his father worked.

It was during the Allan Cup tournament in 1950, specifically a visit to the Stoney Indian Reserve in Alberta, that he got his nickname. When the band heard of Armstrong’s ancestral background, they made him an honorary member with the name “Chief Shoot-the-Puck” and presented him with a ceremonial headdress.

It was a different era and “The Chief” nickname stuck. Armstrong, who was proud of his mother’s heritage, would become the first player of Indigenous descent to score in the NHL.

He spent most of two seasons in Pittsburgh with the Leafs’ American Hockey League farm team before making the big league. He made his NHL debut in December 1949 and became a full-time member of the Leafs in time for the start of the 1952-53 season.

Toronto owner and GM Conn Smythe named Armstrong his captain before the 1957-58 season. Smythe would later call Armstrong “the best captain, as a captain, the Leafs have ever had.”

The Leafs won the Stanley Cup in 1962, the first of three straight championships.

Armstrong was 36 when the veteran Leafs won the franchise’s most recent championship in 1967. His insurance empty-net goal with 47 seconds remaining in the clinching 3-1 Game 6 win was the final goal of the Original Six era.

The 6-foot-1, 204-pounder played a few more seasons but suffered a knee injury during the 1969-70 season that forced him to retire. Armstrong was persuaded to come back for the 1970-71 season before quitting for good at age 40.