Now, the defending champs are headed there for the second straight year.

Showing no lingering effects from a concussion, Patrick Mahomes sliced up Buffalo's secondary with ruthless efficiency as the Chiefs rolled to a 38-24 victory over Josh Allen and the Bills in the AFC championship game Sunday night. Mahomes threw for 325 yards and three touchdowns, with most of it to favorite targets Travis Kelce and Tyreek Hill, 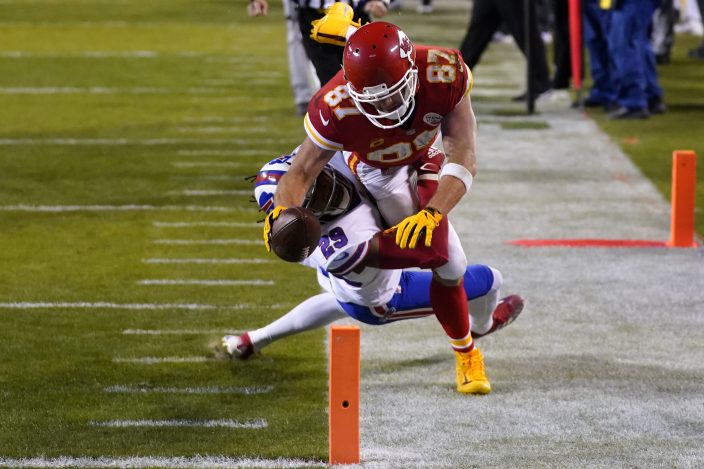 The Chiefs will face a familiar foe — Tom Brady — and the NFC champ Buccaneers in two weeks in Tampa, Florida.

Kelce finished with 13 catches for 118 yards and two touchdowns, and Hill added nine catches for 172 yards, becoming the first duo in NFL history with consecutive games of at least 100 yards receiving each in a single postseason.

Clyde Edwards-Helaire and Darrel Williams added short TD runs for the Chiefs, who will try to become the eighth franchise and first team since the Brady-led New England Patriots in 2003 and '04 to defend the Lombardi Trophy. 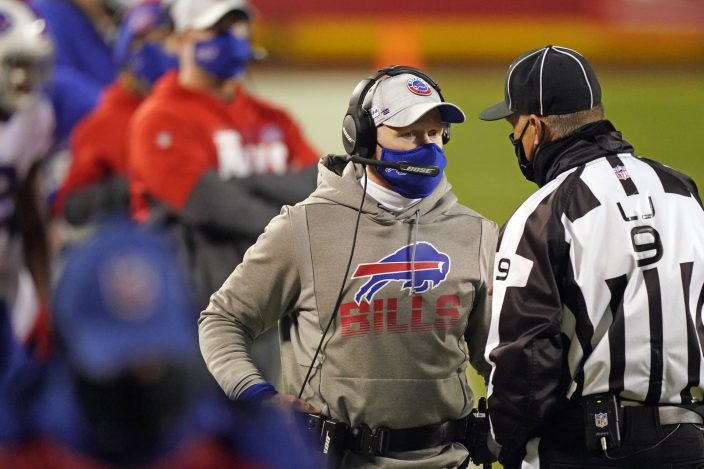 Allen, who had his worst game of the season in a Week 6 loss to the Chiefs, again struggled against the blitzing Kansas City defense. He finished with 287 yards passing with two touchdowns and an interception, but a big chunk of his numbers came as the Bills tried to rally from a 38-15 deficit in the final minutes.

Their frustration boiled over with 3:19 to go, when Allen was getting sacked by Tanoh Kpassagnon. Alex Okafor finished off the tackle, and Allen pitched the ball in his face in resentment. Offensive linemen Jon Feliciano and Dion Dawkins rushed in and leveled Okafor, resulting in a flood of offsetting personal foul penalties.

It capped a bitter loss for the Bills, who had reached their first AFC title game since beating Kansas City at home on Jan. 1, 1994. They had won 11 of 12 since their loss to the Chiefs earlier this season — in fact, they hadn’t trailed in the second half since Week 8 — and were riding a wave of confidence that this might finally be their championship year. 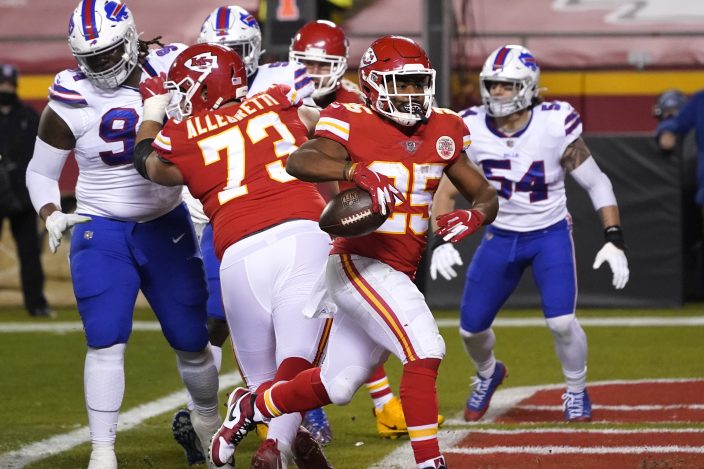 Instead, after finally conquering the Patriots in the AFC East, the Bills have a new roadblock to the Super Bowl.

The Chiefs actually spotted the Bills a 9-0 lead, thanks in large part to Mecole Hardman's muffed punt inside their 5 that gifted Buffalo a touchdown. But the reigning champs were hardly rattled; the Chiefs, after all, rallied from double-digits in each of their postseason wins last season, including their Super Bowl triumph over San Francisco.

Mahomes and Kelce soon found their groove. And the rest of the Chiefs offense followed suit. 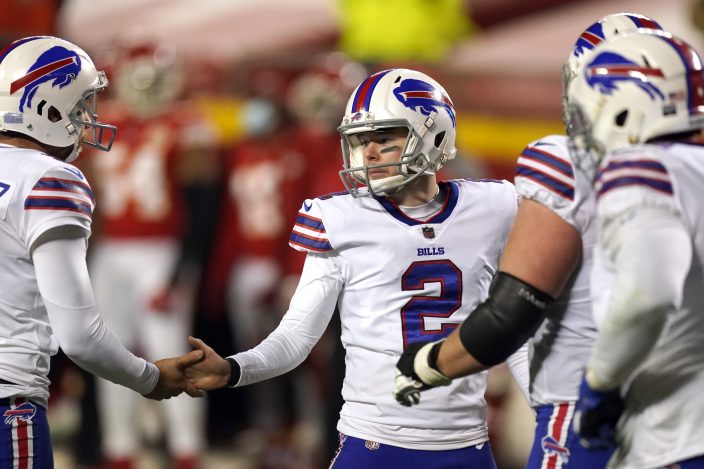 They surgically took apart Buffalo's defense on a 14-play, 80-yard drive that ended with a short TD throw to Hardman — no hard feelings over that fumble. Then, the Chiefs cruised 82 yards in just five plays, the big one Hardman's 50-yard end-around that set up Williams' touchdown tumble. Finally, they made it three TDs in three possessions when Edwards-Helaire — in his first game back from an ankle injury — capped a 77-yard drive with a short plunge.

The only answer from Buffalo was Tyler Bass's chip-shot field goal that made it 21-12 at the break.

You don't beat Kansas City by kicking field goals from the 3-yard line, though. Or from the 9, where the Bills settled for another one to close within 24-15 late in the third quarter.

That became painfully clear on the ensuing drive. Mahomes hit Hill in stride and the All-Pro wide receiver promptly made the Bills secondary look downright foolish. Weaving in and out of woebegone defenders, Hill was finally caught inside the 5-yard line after a 71-yard gain, ultimately setting up Kelce's short TD catch a few plays later.

Any hopes the Bills had of a comeback were dashed when Rashad Fenton picked off a tipped pass deep in Kansas City territory. The Chiefs breezily marched the other direction, and Mahomes and Kelce kicked off the celebration of another trip to the Super Bowl when they connected for their second score of the game.

Chiefs: RG Andrew Wylie hurt his knee early in the second half and LT Eric Fisher limped off in the fourth quarter with an injury to his Achilles' tendon. ... CB L'Jarius Sneed and SS Armani Watts were evaluated for concussions.

The Chiefs and Buccaneers have only played 13 times, and Kansas City had lost five straight before a 27-24 win in Tampa on Nov. 29 — a game that wasn't as close as the final score. Brady is 5-5 in his career against against the Chiefs, including an overtime victory with the Patriots in the AFC title game at Arrowhead Stadium two years ago.