General Secretary Nguyen Phu Trong, 76, defied conventional wisdom by winning a second term in 2016 against a favored opponent. Trong has made his name by presiding over economic growth and waging a popular war on corruption.

There has been speculation the selection of the new set of leaders is already a done deal, but the Vietnamese party is highly secretive and citizens are not even allowed to publicly discuss candidates. A police officer directs traffic in front of the National Convention Center in Hanoi, Vietnam, Saturday, Jan. 23, 2021. Almost 1,600 leading members of Vietnam's Communist Party on Tuesday, Jan. 26, 2021, begin a meeting to set policy for the next five years and select the group's senior members to steer the nation. (AP PhotoHau Dinh)

The city’s streets are lined with the party’s hammer and sickle flags and posters to promote the weeklong congress, which is held every five years. Some 4,900 people involved with the event must each take two tests for the coronavirus.

Vietnam is one of the handful of the world’s remaining communist single-party states that tolerates no dissent. However, policy is not completely dictated from the top.

A series of meetings down to the community level were held earlier in each of Vietnam’s 63 provinces and municipalities to select the 1,587 delegates. They will elect the 200-member Central Committee, which will choose between 15 and 19 of its members to serve on the Politburo, the highest party body. 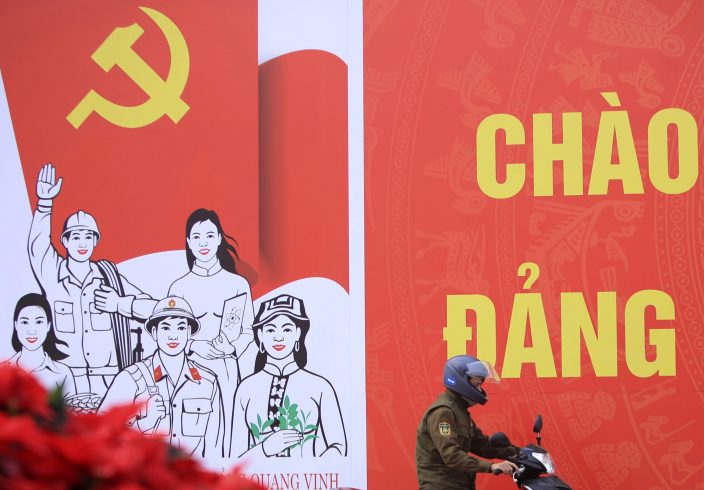 A man rides motorcycle past a poster promoting the Communist Party Congress in Hanoi, Vietnam, Saturday, Jan. 23, 2021. Almost 1,600 leading members of Vietnam's Communist Party on Tuesday, Jan. 26, 2021 begin a meeting to set policy for the next five years and select the group's senior members to steer the nation. (AP PhotoHau Dinh)

The Politburo will make nominations for the “four pillars” — general secretary of the Communist Party, the country’s most powerful job; the president, a largely ceremonial post; the prime minister; and the National Assembly chairman. The nominations are then put to a vote in the party congress.

Vietnam’s Communist Party is known for its collective leadership, which means key decisions are determined by consensus in the Politburo. The agenda for the congress is set by the leadership chosen at the last meeting in 2016.

Factions associated with senior party leaders means the contest for the top jobs may not yet be settled. 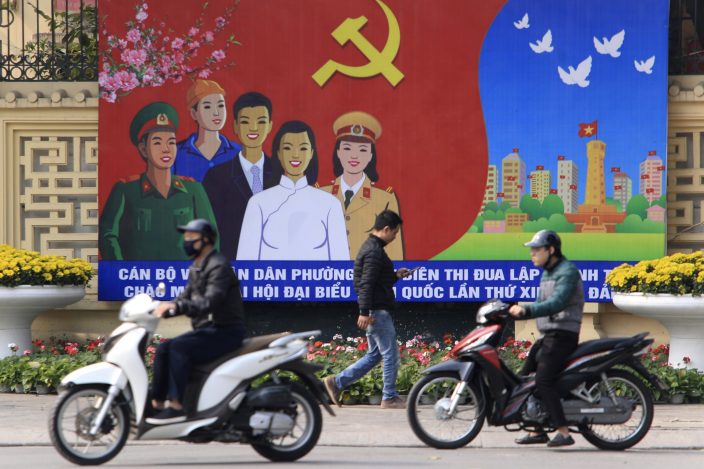 People ride motorcycles past a poster promoting the Communist Party Congress in Hanoi, Vietnam, Saturday, Jan. 23, 2021. Almost 1,600 leading members of Vietnam's Communist Party on Tuesday, Jan. 26, 2021 begin a meeting to set policy for the next five years and select the group's senior members to steer the nation. (AP PhotoHau Dinh)

“The biggest issue the party faces at the congress is appointing a new generation of leaders. However, because of different factions within the party, it has proven hard to get consensus on someone who can replace party chief Nguyen Phu Trong,” Murray Hiebert, a senior associate of the Southeast Asia Program at the Center for Strategic and International Studies in Washington, said in an email interview.

“The party’s regulations don’t allow anyone to serve who is over 65 and/or has served two terms, but these rules will be waived so that Trong can continue another term, even though he has been in ill health in recent years,” he said.

According to Tuong Vu, head of the political science department at the University of Oregon, the party leadership this year seems more united than in 2016.

“The challenge this time for the leadership is that the current General Secretary Nguyen Phu Trong’s protege failed to garner enough support to replace him,” he said. If his favored fellow Politburo member Tran Quoc Vuong cannot garner enough support, it opens the possibility Trong would get an exemption to serve a third term, he said.

“Given his ill health and advanced age, this also generates uncertainties about future succession,” Vu said.

“Trong would be too powerful and that would hinder the collective leadership norm that the party has always been following.” he said. “He would also set a precedent for others to cling on to power and that would make it difficult to groom leadership sustainably and harm the constitution in the long run.”

Trong benefits from his record on the economy, Hiebert said.

Vietnam has grown an average of 6% over the past five years and nearly 3% in 2020, when most of its neighbors slumped into recession thanks to the pandemic, Hiebert said.

“It continued to attract foreign investment levels that are the envy of most of its neighbors and got an additional boost as companies sought to move part of their supply chain out of China in the wake of the U.S.-China trade war.”

On the debit side, Vietnam faced difficulty exploring for and exploiting offshore oil and gas due to China’s pressure on its activities in the disputed South China Sea, said Hiebert.

Human rights groups urged a focus on those issues from the new leadership.

“The Vietnamese authorities’ intolerance of peaceful dissent has peaked under the outgoing leadership,” alleged Amnesty International. “The nomination of new national leaders provides an invaluable opportunity for Vietnam to change course on human rights.”