Joe Pavelski helped the Dallas Star tie the NHL record for power-play goals in the first two games, scoring one of three with the man advantage in another victory over the Nashville Predators, 3-2 on Sunday night.

Denis Gurianov and Roope Hintz also scored on the power play after the Stars went 5 of 8 with the man advantage in a 7-0 victory over the Predators in their delayed opener. Dallas was 3 of 4 on the power play this time.

The Stars tied the 1995-95 Pittsburgh Penguins and 1942-43 Detroit Red Wings with eight power-play goals in the first two games. Pavelski also had the primary assist on the goals by Gurianov and Hintz, giving him seven points through two games after he had two goals and two assists in the opener. Hintz had two assists as well.

Filip Forsberg beat Anton Khudobin for the first time in nearly 90 minutes to start the Dallas goalie’s season after the Stars were called for too many men on the ice in the second period.

It was just second power-play goal in the first 19 chances of the season for the Predators, who have lost three consecutive games after winning their first two. 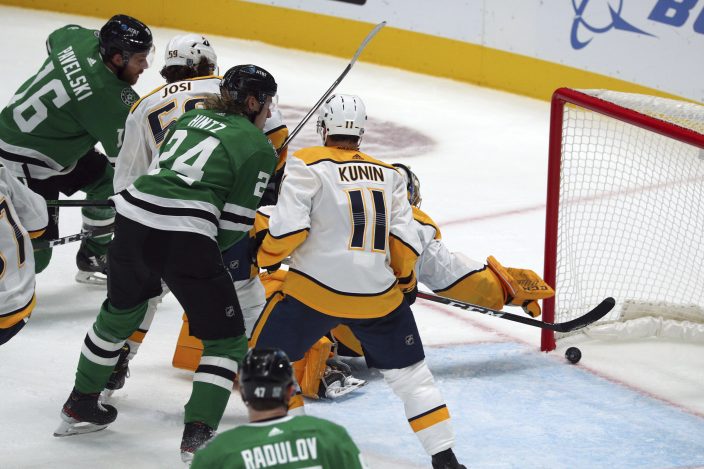 Mikael Granlund got Nashville within a goal again midway through the third period by redirecting a shot from Viktor Arvidsson past Khudobin for the first even-strength tally of the game.

Khudobin made 15 saves, including a sprawling stop with his pads on a shot from Arvidsson with the Predators playing 6-on-5 in the final minute.

The Stars had gone up 3-1 when Pavelski beat Juuse Saros with a one-timer from the left circle on a pass from Hintz early in the third after Arvidsson's tripping penalty. 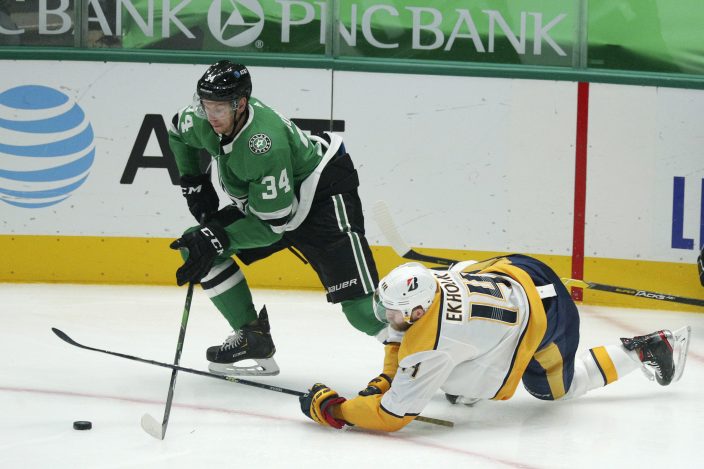 Khudobin’s seventh career assist started a final Dallas rush with about 10 seconds left on Rocco Grimaldi’s tripping penalty in the second period. Hintz’s shot from the left circle rolled over Saros’ right leg and trickled across the goal line.

Gurianov opened the scoring with a one-timer from the right circle on a pass from behind the goal line by Pavelski following a tripping call against Nick Cousins.

The Stars played without forward Jamie Benn two days after their captain’s right leg buckled awkwardly during a collision in the opener. Forward Joel Kiviranta was placed on injured reserve after leaving practice Saturday with a lower-body injury.