Jake Guentzel scored the 100th goal of his NHL career with less than two minutes remaining, rallying the Pittsburgh Penguins to a 3-2 win over the New York Rangers on Sunday night.

Guentzel’s goal at 18:29 was his second of the season.

“We have a resilient group,” Penguins coach Mike Sullivan said. “These guys, especially the core guys in the leadership group, have been through a lot. If they’re in a one-, or two-goal game, they know they’re capable of winning those games.” 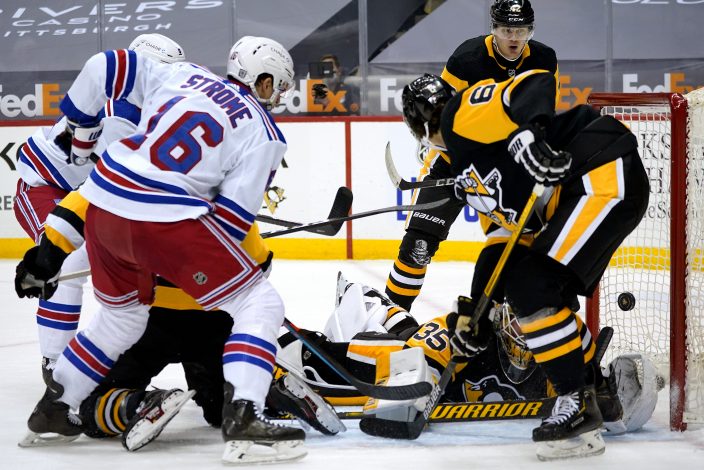 Pittsburgh trailed 2-1 entering the third period before Jared McCann and Guentzel scored in the final 20 minutes, extending the Penguins’ win streak to four games after two opening losses. It was Pittsburgh’s fourth straight comeback win, tying the longest such streak in franchise history. The Penguins have had four straight comebacks six times.

It was Pittsburgh’s fourth win of the season, but first in regulation, as the previous three came in the shootout or overtime. Bryan Rust also scored and Tristan Jarry made 20 saves for the Penguins, who started 4-0 at home for the first time since the 2013-14 season.

“We’re developing that confidence, knowing that it doesn’t matter how many goals we’re down, or what the situation of the game is, we can always make a push to come back,” Rust said. 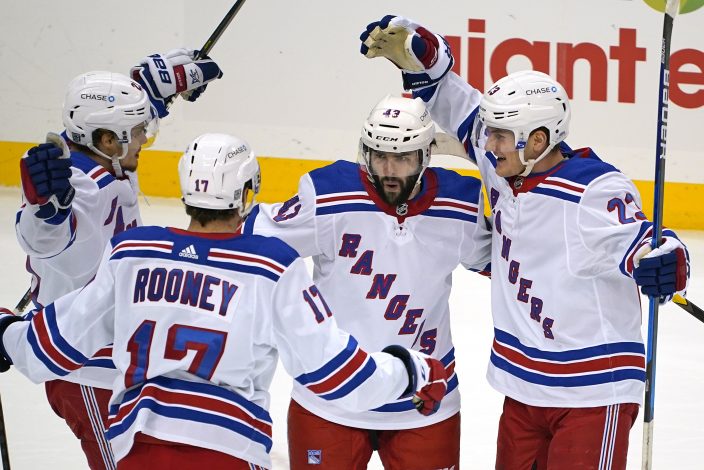 Colin Blackwell and Ryan Strome scored for the Rangers, who held a 3-1 lead against Pittsburgh on Friday before losing in a shootout. Igor Shesterkin stopped 16 shots for the Rangers.

Guentzel’s slap shot from the top of the circle beat Shesterkin between the pads for the game-winner. He became the 17th player in team history and the 10th-fastest to record their first 100 goals with Pittsburgh. 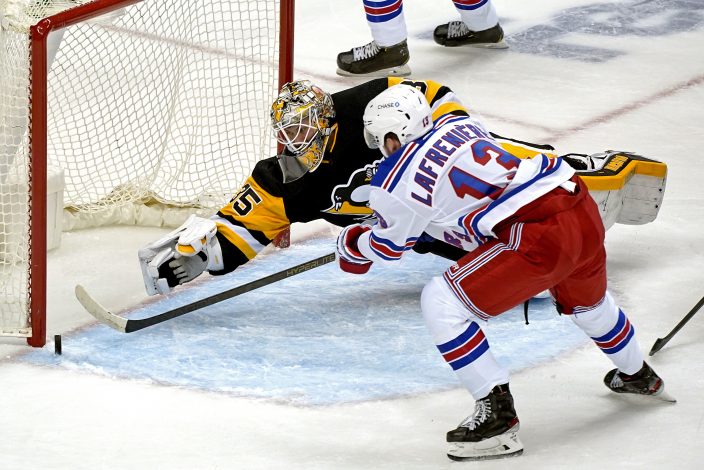 After losing his stick Pittsburgh Penguins goaltender Tristan Jarry (35) tries to make a save of a shot by New York Rangers' Alexis Lafreniere (13) during the first period of an NHL hockey game in Pittsburgh, Sunday, Jan. 24, 2021. (AP PhotoGene J. Puskar)

Guentzel became the sixth member of the 2013 draft class and the only one outside of the top-10 to score 100 goals.

“Obviously, it’s a cool honor, and we’re fortunate that it was the game-winner,” Guentzel said. “It’s a big goal for us. Any chance to get two points is definitely big.” 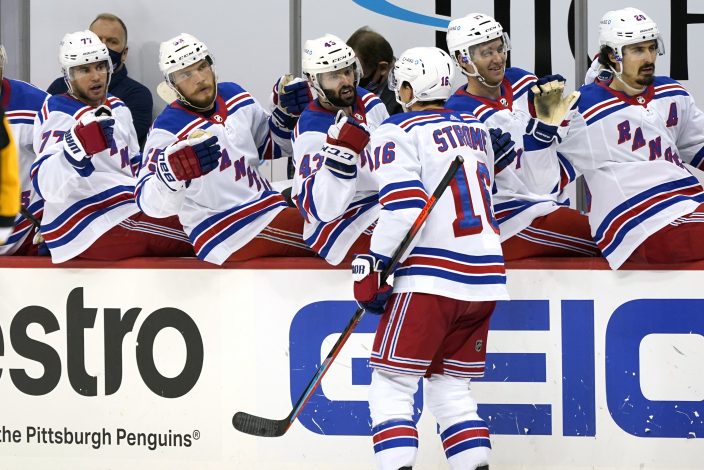 New York Rangers' Ryan Strome (16) returns to the bench after scoring during the second period of an NHL hockey game against the Pittsburgh Penguins in Pittsburgh, Sunday, Jan. 24, 2021. (AP PhotoGene J. Puskar)

With Rodrigues in the dressing room, Rust was promoted to the top line, alongside Guentzel and Sidney Crosby, and he tied the game at 1-all on the next shift. Rust, who extended his point streak to five games, took a lead pass from Crosby and beat Shesterkin between the pads on a breakaway.

“When we made the change and put (Rust) with (Crosby) and (Guentzel), they had instant success,” Sullivan said. “Those guys have been familiar with one another and they played together for a long period of time.” 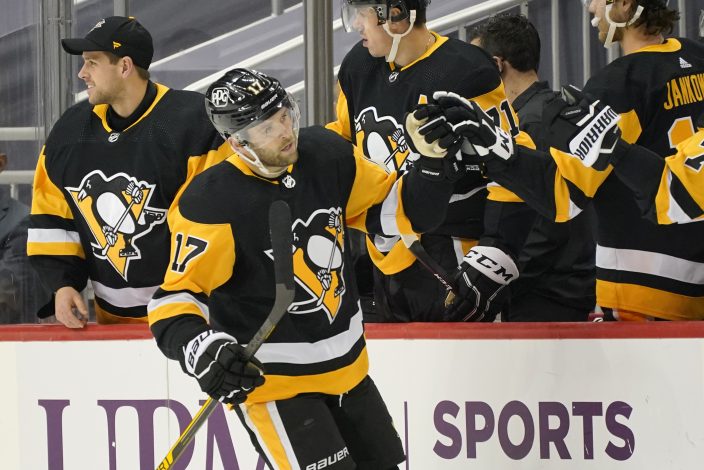 Pittsburgh Penguins' Bryan Rust (17) returns to the bench after scoring during the second period of an NHL hockey game against the New York Rangers in Pittsburgh, Sunday, Jan. 24, 2021. (AP PhotoGene J. Puskar)

LETTING ANOTHER ONE GO

New York Rangers’ coach David Quinn lamented allowing another lead slip away against Pittsburgh — the second time in as many games.

The Penguins scrambled back from a two-goal deficit to beat New York in a shootout on Friday. Pittsburgh scored twice in the third period to defeat the Rangers in regulation on Sunday, as New York opened the season with one win in its first five games.

“You just have to find ways to win,” Quinn said. “We’ve been talking about the good things that we did, but you’ve got to win hockey games. To come here and play some good hockey and come away with one point is really disappointing.”

Pittsburgh, which closed a four-game homestand, travels to Boston on Tuesday for the start of a four-game trip.

The New York Rangers continue a four-game trip Tuesday at Buffalo. The Rangers will host Pittsburgh for a two-game set on Jan. 30 and Feb. 1 at Madison Square Garden.