Brent Burns' goal with 1:48 remaining snapped a tie and lead the San Jose Sharks to a 5-3 win over the Minnesota Wild on Sunday night.

Burns corralled a loose puck in the right circle, cut to the middle between three Wild defenders, shifted from his forehand to backhand and beat Kaapo Kahkonen on the far side for the winner. 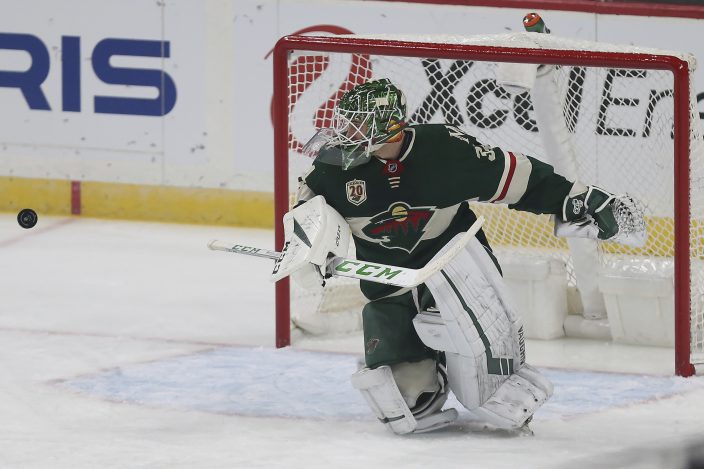 Minnesota Wild's goalie Kaapo Kahkonen watches the puck after he blocked a goal-attempt by the San Jose Sharks in the first period of an NHL hockey game Sunday, Jan. 24, 2021, in St. Paul, Minn. (AP PhotoStacy Bengs)

Fiala tied the game three seconds into a power-play at 7:20 of the final period, as Minnesota tried to rally from a 3-1 deficit for its third win of the season.

Kane and Gregor scored less than two minutes apart in the second period, giving the Sharks a two-goal lead. 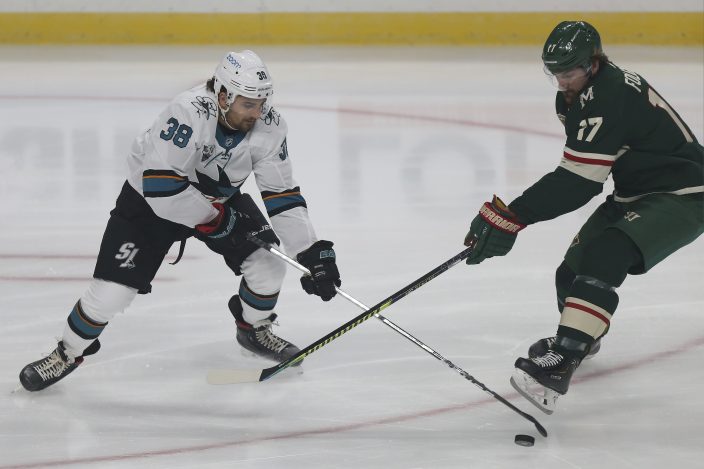 San Jose got some off-ice help, too when a Minnesota goal was waved off between those scores.

Bjugstad and Kirill Kaprizov crashed the net trying to convert a feed from Fiala. Called a goal on the ice, it was successfully challenged by the Sharks, with video review determining Bjugstad interfered with Martin Jones by pushing his pad, causing the puck to cross the line.

Bjugstad, a Minnesota native, scored his first goal for the Wild late in the period to make it 3-2.

Minnesota took an early 1-0 lead on a dazzling play by Kaprizov, who, off a neutral-zone faceoff, split two defenders and, on a 2-on-1, sent a backhanded across to Parise, who scored into the top corner.

Kaprizov leads NHL rookies with six points and five assists and is the first Wild rookie to average a point per game through his first six contests.

Sharks: Jones finished with 26 stops. … Looking for more speed and motion in the offensive zone, San Jose tweaked some line combinations with John Leonard getting back with Kane and Tomas Hertl on the second line. Dylan Gambrell centered Timo Meier and Gregor. “Still trying to find that sweet spot,” coach Bob Boughner said.

Wild: G Cam Talbot, who left Friday’s game with a lower-body injury, did not dress and is considered day to day. Andrew Hammond came off the taxi squad to serve as the backup. ... C Nico Sturm (illness unrelated to COVID-19) missed his second straight game. ... Kahkonen had 31 saves.

Wild: Continue a six-game homestand Tuesday with the first of two against Los Angeles.