The International Olympic Committee will consider imposing a humiliating probation on Italy’s team for the Tokyo Games this week because of a two-year domestic dispute that it says amounts to government interference.

The IOC has taken issue with the Italian government’s formation of a new organization, “Sport e Salute,” that was created at the start of 2019 to run the country’s sports finances. The money was previously controlled by an arm of the Italian Olympic Committee. 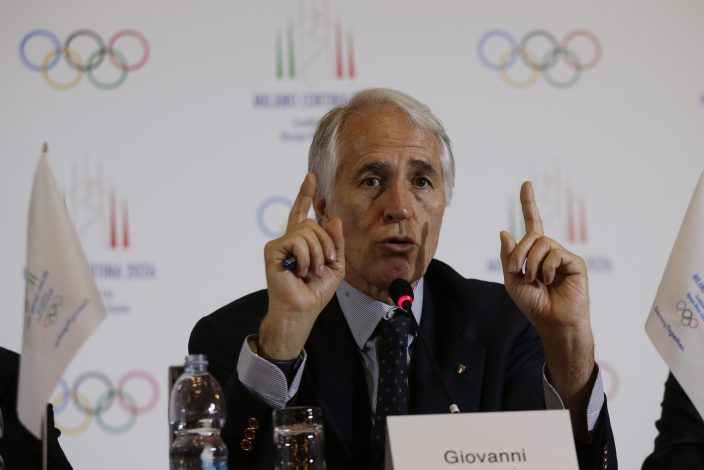 FILE - In this April 6, 2019 file photo, President of the Italian National Olympic Committee, CONI, Giovanni Malago' gestures as he talks during a winter Olympics Milan Cortina bid IOC Evaluation Commission final news conference, in Milan, Italy. The International Olympic Committee is slated in January 2021 to consider imposing a humiliating probation on Italy’s team for the Tokyo Games due to a two-year domestic dispute that it says amounts to government interference. (AP PhotoLuca Bruno, file)

Barring a last-minute change from the government, the embarrassing prospect of probation would lump Italy together with Russia, which last month was banned from using its name, flag and anthem at the next two Olympics or at any world championships for the next two years in fallout from a state-backed doping scandal.

International bodies such as the IOC and FIFA typically threaten national affiliates with suspension to protect sports officials’ decision-making power from lawmakers.

Kuwait competed at the 2016 Rio de Janiero Olympics as “Independent Olympic Athletes” under the Olympic flag and anthem during a similar dispute over government interference. 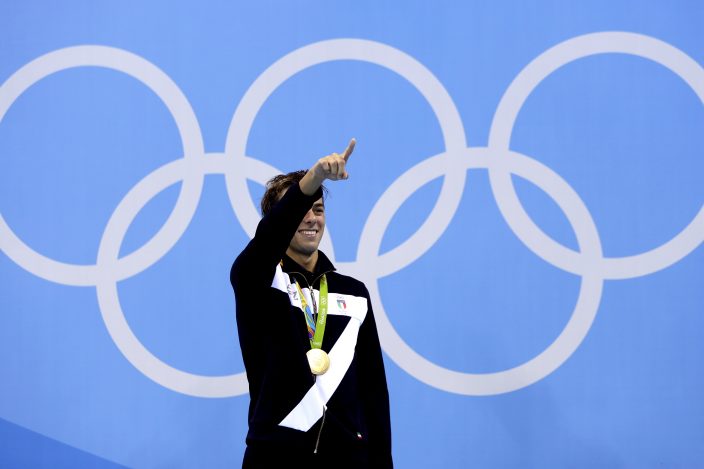 FILE - In this Augl 13, 2016 file photo, Italy's Gregorio Paltrinieri celebrates his gold during the medal ceremony for the men's 1500-meter freestyle final during the swimming competitions at the 2016 Summer Olympics, in Rio de Janeiro, Brazil. The International Olympic Committee is slated in January 2021 to consider imposing a humiliating probation on Italy’s team for the Tokyo Games due to a two-year domestic dispute that it says amounts to government interference. (AP PhotoMichael Sohn, file)

The “Olympic Athletes from Russia” team name was used at the 2018 Pyeongchang Winter Games because of the doping scandal.

In the first of two warning letters that IOC president Thomas Bach wrote to Italian Premier Giuseppe Conte late last year, he noted that “significant legal and structural changes have been imposed on the national Olympic committee of Italy," which is known as CONI.

“They unfortunately no longer allow CONI to fully perform its role as an IOC-recognized national Olympic committee and to operate in accordance with the Olympic charter,” Bach added.

The IOC president also suggested that the supposed interference could — under extreme circumstances — result in Italy being stripped of hosting rights for the 2026 Winter Olympics in Milan and Cortina d’Ampezzo.

“CONI, being a signatory of the host city contract for the Olympic Winter Games, may under these circumstances not be able to live up to its responsibilities,” Bach said in the letter to Conte.

CONI has traditionally run all sports in Italy, deciding how to divide up millions of dollars of state funding to each of the country’s national sports federations. Now, “Sport e Salute” handles that responsibility, with 280 million euros ($325 million) handed out for 2020.

While CONI said it has no problem with the funding issue, it has taken exception to the government’s meddling with its election procedures, and its ability to control its staff.

Giovanni Malagò is planning to run for CONI president again in May, but the proposed law could preclude him from serving three consecutive terms.

Italian Sports Minister Vincenzo Spadafora responded to the IOC in November promising that government reforms would provide CONI “proper functional and organizational autonomy, as dictated by the Olympic Charter.”

But the reforms fell through and now Conte’s government is mired in a political crisis.

The IOC could decide at its executive committee meeting Wednesday on a provisional suspension, which could then be lifted if the government provides more autonomy for CONI before the postponed Tokyo Games are scheduled to begin on July 23.