Michael Porter Jr. tied his season high with 30 points and the Denver Nuggets overcame Jamal Murray's ejection for a shot to the groin of Dallas guard Tim Hardaway Jr. to beat the Mavericks 117-113 on Monday night.

Porter was 6 of 10 from 3-point range, including a go-ahead shot to start a decisive 7-0 run late in the fourth quarter after the Mavericks had rallied immediately following the incident involving Murray and Hardaway.

Luka Doncic had 35 points, 11 rebounds and a season-high 16 assists for his league-leading sixth triple-double. The Dallas star broke a tie for the NBA lead with Nikola Jokic, who had 20 points and 10 rebounds for the Nuggets. 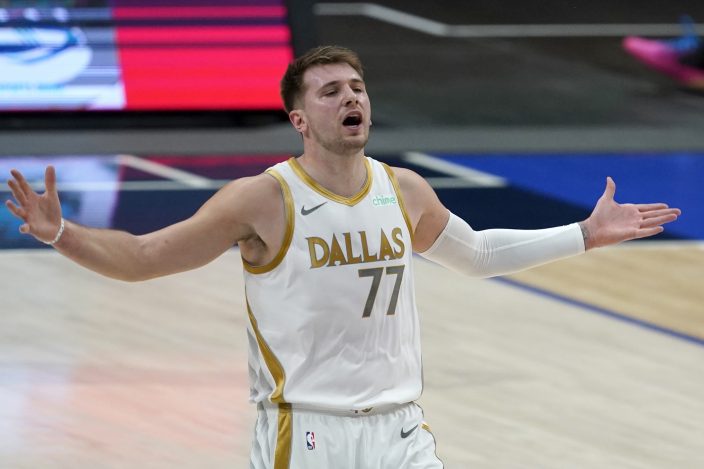 Dallas Mavericks' Luka Doncic (77) gestures after missing on a 3-point shot attempt in the first half of an NBA basketball game against the Denver Nuggets in Dallas, Monday, Jan. 25, 2021. (AP PhotoTony Gutierrez)

Denver was setting up on offense early in the second half when Murray stumbled backward after colliding with Hardaway. Murray got up and reached between Hardaway’s legs with his right arm, prompting Hardaway to double over.

The official closest to the contact blew the whistle to stop play with 4:51 left in the third quarter and conferred with the other referees. The initial call was a foul on Murray, and it was upgraded to a flagrant-two foul on a video review.

The Nuggets led 80-73 when the game was stopped, and Hardaway scored the next seven points in just 23 seconds to get the Mavericks even before they went on to take their first lead since early in the first quarter. Hardaway scored 16 of his 19 points in the third. 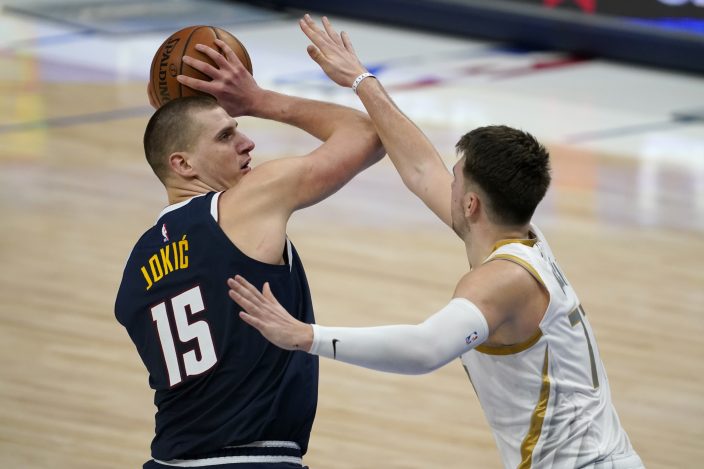 Denver scored the first seven points of the fourth quarter to go back in front before Dallas got even at 104 with five minutes remaining.

Doncic put the Mavericks ahead with a short jumper before Porter hit a 3 then had a dunk the next trip down. Another 3-pointer from Porter, who also had eight rebounds, put Denver up 114-107 with 41 seconds to go. 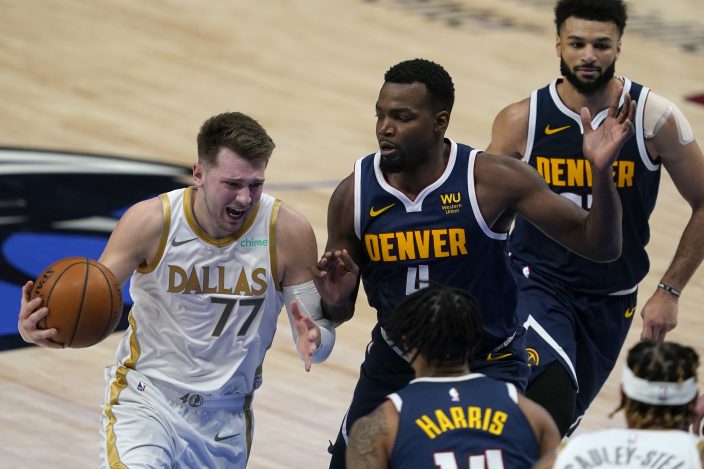 Nuggets: JaMychal Green had 17 points and eight rebounds as Denver outrebounded Dallas 53-39. ... Monte Morris led Denver with six assists. ... Facundo Campazzo, Doncic’s teammate with Real Madrid the season before the Mavericks drafted the Slovenian star in 2018, was scoreless in 12 minutes after the rookie from Argentina was a healthy scratch in Dallas' 124-117 overtime victory in Denver.

Mavericks: Coach Rick Carlisle said Josh Richardson, Dorian Finney-Smith and Dwight Powell could return from the COVID-19 list this week. Richardson and Finney-Smith have missed nine games since they were left behind after the first meeting with the Nuggets in Denver. Powell, who went through shooting drills on the arena’s main court before the game, has missed eight games. ... Kristaps Porzingis had 16 points on 6-of-18 shooting after missing a game to rest his surgically repaired right knee.

Nuggets: At Miami on Wednesday in the fourth game of a five-game trip. The teams split two games last season, including a Heat victory in the first game of the restart for both teams in the NBA bubble in Florida in August.

Mavericks: First of two at Utah on Wednesday. The Mavericks beat the Jazz twice before the coronavirus shutdown last season before Utah won in the bubble.

Barça has deficit to overcome to recover in Champions L ...