Tampa Bay’s victory in the NFC championship was one for the aged.

Outdueling Aaron Rodgers set up the ageless Tom Brady (OK, he's 43) to become the oldest player ever to play in a Super Bowl.

Bruce Arians, 68, earned a shot at becoming the oldest head coach ever to win a Super Bowl after he outcoached 40-year-old Matt LaFleur in the Bucs' 31-26 victory at Lambeau Field on Sunday. 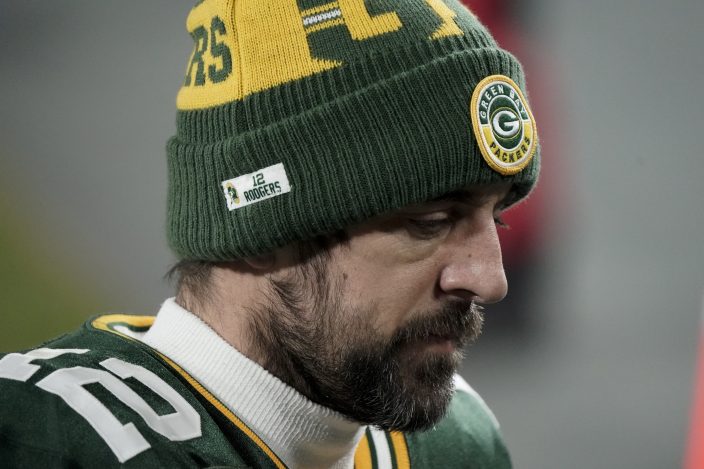 The Bucs’ victory over the Packers that sent them home to Raymond James Stadium for Super Bowl 55 against defending champion Kansas City came down to two pivotal calls, one by each coach.

The first one came with 13 seconds left in the first half following a Green Bay turnover when Arians summoned his punt team back to the sideline and sent Brady and the offense back out to go for it on fourth-and-4 from the Green Bay 45.

“We didn’t come here to not take chances to win the game,” Arians explained. 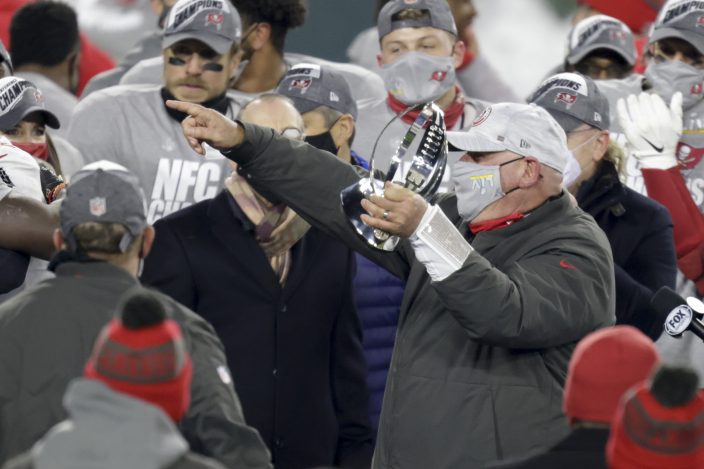 On the next play, cornerback Kevin King inexplicably allowed Scotty Miller to race past him in single coverage and Brady hit his receiver for a 39-yard touchdown with 1 second left for a 21-10 halftime lead.

“We were going to try to heave it like a Hail Mary type thing,” Miller said. “They played me pretty much man-to-man and my guy didn’t get too much depth, so I was able to just run right by him. Then Tom put a great ball on me like he always does. It was a special moment. I don’t even know if I could have dreamed of it as a kid. It’s just so crazy.” 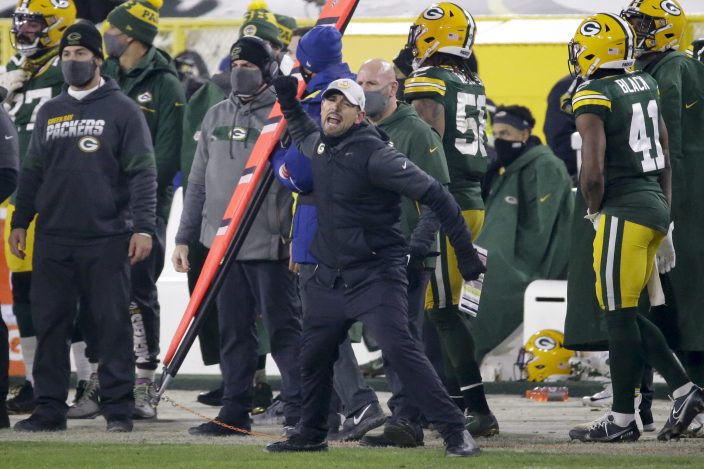 Green Bay Packers head coach Matt LaFleur reacts after a pass interference call was made against Green Bay during the second half of the NFC championship NFL football game against the Tampa Bay Buccaneers in Green Bay, Wis., Sunday, Jan. 24, 2021. (AP PhotoMike Roemer)

“Yeah, it was man coverage. Definitely not the right call for the situation,” LaFleur said.

The aggressive move by Arians was in line with what the Bucs' coaching staff had promised the players.

“It was a risk at the time,” Miller added, “but there was only 13 seconds left, so if we ran a play and didn’t get it, we probably waste six (seconds). Then they probably have to throw a Hail Mary as well, so why not us do it?”

The second critical call was LaFleur’s head-scratching decision to kick a field goal rather than go for the tying touchdown and 2-point conversion on fourth-and-goal from the 8 with 2:05 remaining and the Packers trailing 31-23.

With a spot in the Super Bowl on the line, he chose to put the game not in the hands of his All-Pro quarterback who’s the MVP favorite, but in those of his defense.

“The way our defense was playing, it felt like the right decision to do,” LaFleur said. “It just didn’t work out.”

Rodgers never got the ball back as Brady clinched his 10th trip to the Super Bowl and sent Rodgers to his fourth straight conference championship loss one week after ending Drew Brees’ season and probably his career with a win at New Orleans.

The Packers had rallied from 18 points down and were in position to tie it with a touchdown and a 2-point conversion. On first-and-goal, Rodgers threw an incomplete pass to Allen Lazard followed by a misfire to Davante Adams.

Rodgers might have been able to run it in himself on third down, but pulled up and misfired again to Adams.

No worries, he thought, figuring he’d get a fourth crack at it.

Fail, and at least Brady and the Bucs would be backed up.

Rodgers, however, turned to see Mason Crosby trotting out for a field goal instead.

“That wasn’t my decision,” Rodgers said as diplomatically as he could. “But I understand the thinking ... .”

“I couldn’t believe it, honestly,” Barrett said, “because there’s no guarantee they’re going to make it back down there again.”

After all, Brady is one of the game’s greatest closers, especially when all he needs is a first down or two to go into victory formation.

“Our offense has been pretty amazing in four-minute offense this year, not giving the team back the ball so I had the utmost confidence in them,” Barrett said. “If he could take it back he probably wouldn’t do that next time but I appreciate it.”

Yes, LaFleur was kicking himself for kicking it.

“Yeah, any time it doesn’t work out, you always regret it, right?” LaFleur said. “But it was the circumstances of having three shots and coming away with no yards and knowing that you not only need the touchdown, but you need the 2-point (conversion). We essentially had four timeouts with the two-minute warning. We knew we needed to get a stop.”

King was called for pass interference on third down with 1:41 left and Tampa Bay sealed the win moments later on a third-down run by Chris Godwin.

That left Brady with one NFC title to go with the nine AFC championships he won in New England. Rodgers has one NFC championship in 13 seasons as a starter in Green Bay and Brees has one in 15 seasons as the Saints starting QB.

“This one does sting,” LaFleur said. “It’s going to take a long time getting over this one.”

Rodgers admitted he wasn’t sure how to move on from the disheartening defeat, saying, “A lot of guys’ futures are uncertain, myself included.”

“There’s a lot of unknowns going into this offseason now. I’m going to have to take some time away for sure to clear my head and see what’s going on with everything,” Rodgers said. “But it’s really tough right now, especially thinking about the guys who may or may not be here next year.”

LaFleur is praying that doesn’t include Rodgers.

Asked if he thinks he’ll get another chance to work with Rodgers next season, LaFleur said, “I sure as hell hope so. I mean, the guy’s the MVP of this league. He’s the heart and soul of our football team. So, hell yeah, he better be back here. He’s our leader.

“Just so appreciative of him buying into what we’re trying to get done around here and leading that group. His voice carries a lot of weight in that locker room. And just you know, I feel for him, to be in this situation and for us not get it done, man, that hurts.”

NFL won't be cutting in line for coronavirus vaccine

'My Cause My Cleats' campaign has taken a foothold in NFL

Derek Carr is the king of the audacious audibles in 2020

Mahomes piles up big numbers at Arrowhead - on Election Day