Kobe Bryant wasn’t in the bubble with the Los Angeles Lakers last fall when they won the NBA championship. He wasn’t at the All-Star weekend in Chicago where half the players wore his number on their uniforms, the other half wearing his daughter’s jersey number. He wasn’t there to hear the Basketball Hall of Fame announced that his career was worthy of enshrinement.

Yet his presence was so clearly felt in each of those moments.

Bryant, his daughter Gianna and the other seven people who climbed aboard that helicopter on a Sunday morning in Southern California have been gone for exactly one year now — Tuesday marks the grim anniversary of the crash that took their lives. 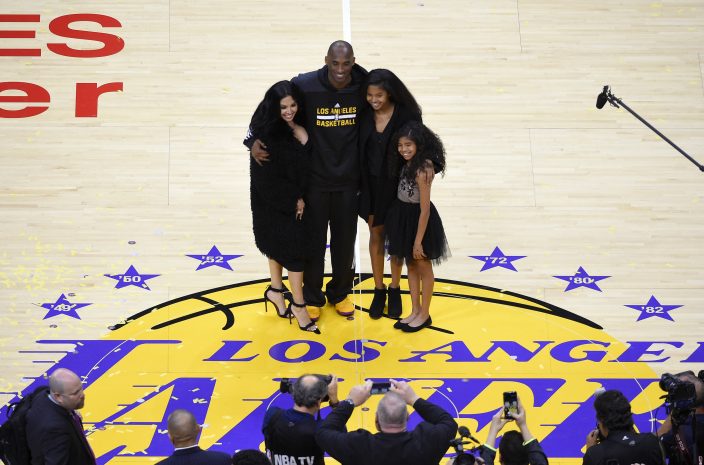 FILE - In this April 13, 2016, file photo, Los Angeles Lakers' Kobe Bryant poses for pictures with his wife Vanessa, left, and daughters Natalia, second from right, and Gianna as they stand on the court after an NBA basketball game against the Utah Jazz, in Los Angeles. Kobe Bryant's legacy may be stronger than ever. Tuesday, Jan. 26, 2021, marks the anniversary of the crash that took the lives of Bryant, Gianna and seven other people. (AP PhotoMark J. Terrill, File)

And if there was any doubt about what kind of legacy Bryant — a five-time NBA champion, still the No. 4 scorer in NBA history, a 20-year veteran of the league — left behind, it has been erased now. He still resonates, maybe more than ever.

“God rest his soul, God rest the soul of Gigi and the seven others that perished,” said Miami assistant coach and former NBA player Caron Butler, who was close with Bryant for years. “The legacy that he left, man, he did it all. He inspired. When you think about being better, embracing the storm, having the right mentality and perspective about life and always trying to be better, he embodied it all and that’s why his legacy will live forever.”

People lift weights on a sidewalk outside the Hardcore Fitness gym, due to COVID-19 restrictions, under a mural honoring NBA star Kobe Bryant and his daughter Gigi near Staples Center in downtown Los Angeles, Monday, Jan. 25, 2021. Bryant, who became one of the greatest basketball players of his generation during a 20-year career with the Lakers, died in a helicopter crash with his daughter Gigi and other passengers on Sunday, Jan. 26, 2020. (AP PhotoDamian Dovarganes)

Bryant is gone, but that doesn’t mean Butler is wavering on a promise he made. Butler famously had a longtime affinity for Mountain Dew, even drinking it during games when others thought he was having Gatorade. When Butler played for the Lakers, Bryant strongly urged him to kick the habit.

Butler was taping an ad last year for Mountain Dew. He took a sip for the cameras. He then spit the drink out.

“Out of respect to my brother,” Butler said. 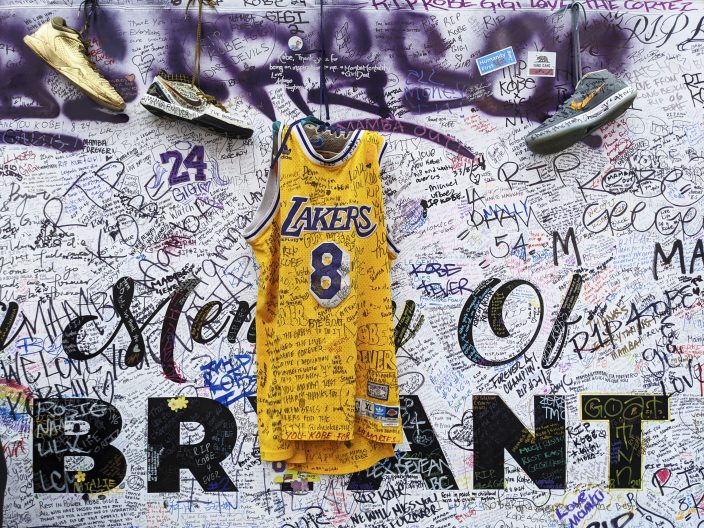 FILE - In this Feb. 2, 2020, file photo, sneakers and a Los Angeles Lakers uniform with the numbers worn by NBA star Kobe Bryant are left at a memorial for Bryant while fans gather to pay their respect near Staples Center in Los Angeles. Bryant, the 18-time NBA All-Star who won five championships and became one of the greatest basketball players of his generation during a 20-year career with the Lakers, died in a helicopter crash Sunday, Jan. 26. (AP PhotoDamian Dovarganes, File)

Butler and Bryant were brothers in the teammate sense. Tony Altobelli lost his actual brother, John Altobelli, in the crash. Alyssa Altobelli was a teammate of Gianna Bryant; she was on the helicopter along with John, her father, and mother Keri.

His brother died with Kobe Bryant. That’s how the world got to know who his brother was. 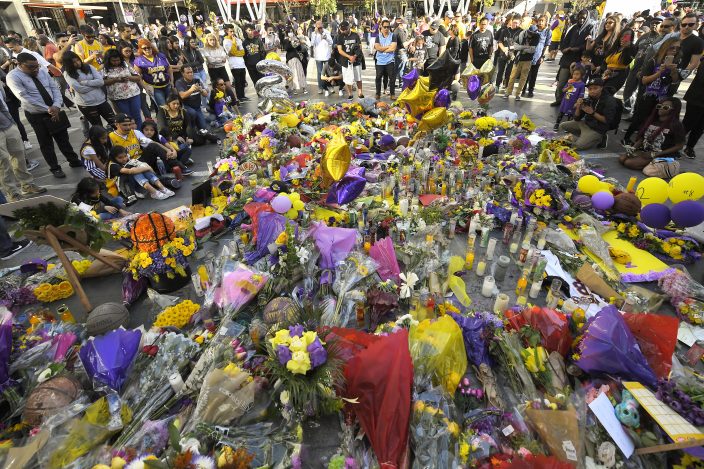 FILE - In this Jan. 28, 2020, fans gather in front of several memorials set up at LA Live, near Staples Center where the Los Angeles Lakers play, to memorialize Kobe Bryant in Los Angeles following a helicopter crash that killed the former NBA basketball player, his 13-year-old daughter, Gianna, and seven others. (AP PhotoMark J. Terrill, File)

“It’s nice to see his memory, and just his way of his life being celebrated by people far beyond our area,” Tony Altobelli said. “It takes a little bit of the sting off what happened. I’ve kind of jokingly said if it had to happen, I’m glad a global figure was with him when it happened because now the whole world knows about my brother, my sister-in-law and my niece. And I think that’s pretty cool.”

Christina Mauser died in the crash as well; she was one of the coaches at Bryant’s academy. Tony Altobelli and Mauser’s husband Matt have become friends in the last year; they didn’t know each other before Jan. 26, 2020. Matt Mauser has organized a concert to honor those who died in the crash and to serve as a benefit for the foundation he started in his wife memory; it streams Tuesday night.

Sarah Chester and her 13-year-old daughter Payton, another of the players along with Gianna and Alyssa, also were on board. Also killed was the pilot, Ara Zobayan. The Lakers were in the air when the news broke, flying home from a game in Bryant’s hometown of Philadelphia. Word spread around the NBA quickly; the Golden State Warriors were just starting practice when someone there found out.

FILE - In this April 13, 2016, file photo, a giant banner congratulating Kobe Bryant is draped around Staples Center before his last NBA basketball game in downtown Los Angeles. Bryant, the 18-time NBA All-Star who won five championships and became one of the greatest basketball players of his generation during a 20-year career with the Los Angeles Lakers, died in a helicopter crash Sunday, Jan. 26, 2020. (AP PhotoRichard Vogel, File)

“Everything stopped,” Warriors coach Steve Kerr said. “The music stopped. The players stopped. Nobody said a word. A lot of guys dropped to the floor and started crying. Nothing happened for 10 minutes. We all just sat there in silence. It was one of the worst moments of all our lives.”

The Lakers are not planning any formal marking of the day, nor is the NBA. It is not a day for celebration. It is a day for remembrance, not that it’s needed. 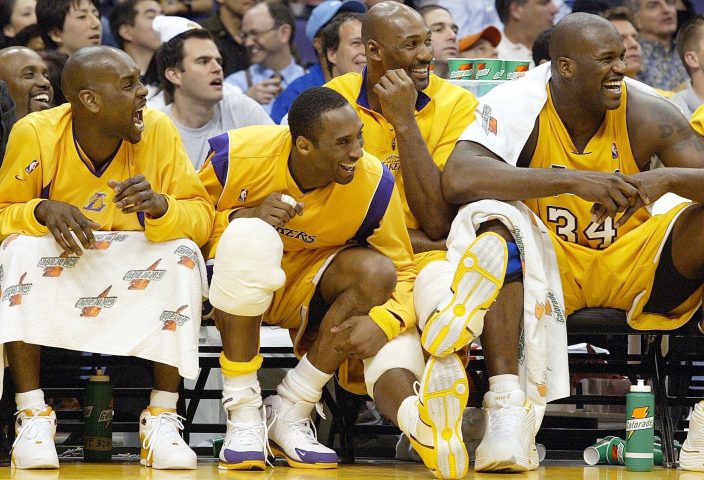 FILE - In this March 30, 2004, from left, Los Angeles Lakers guard Gary Payton, guard Kobe Bryant, forward Karl Malone, and center Shaquille O'Neal smile as they watch their teammates play against the New Orleans Hornets during the fourth quarter at Staples Center in Los Angeles. Kobe Bryant's legacy may be stronger than ever. Tuesday, Jan. 26, 2021, marks the anniversary of the crash that took the lives of Bryant, his daughter Gianna and seven other people. (AP PhotoNam Y. Huh, File)

“I don’t think any of us will ever forget that day,” Kerr said. 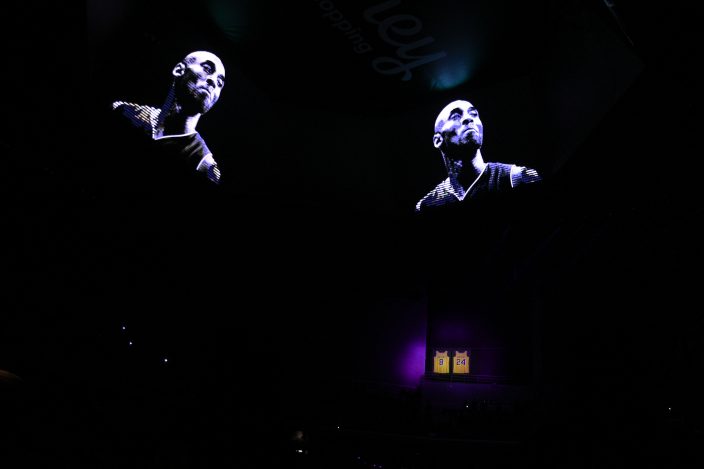 FILE - In this Jan. 30, 2020, file photo, a video is played in remembrance of late Los Angeles Lakers player Kobe Bryant while his retired jerseys hang in the rafters prior an NBA basketball game between the Los Angeles Clippers and the Sacramento Kings in Los Angeles. (AP PhotoKelvin Kuo, File) 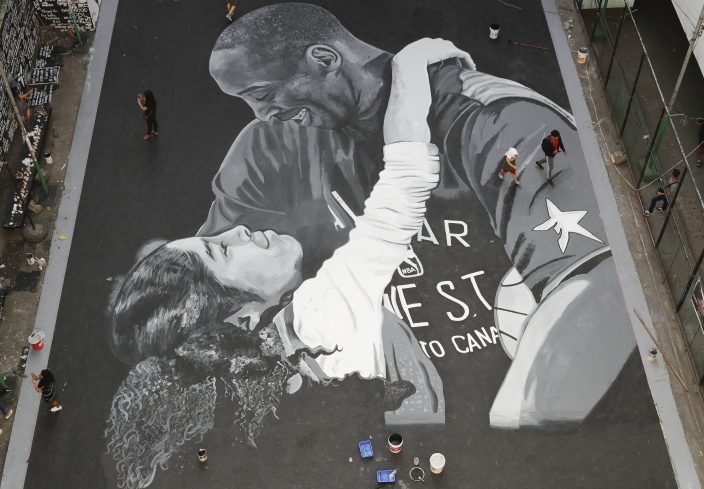 FILE - In this Jan. 28, 2020, file photo, people walk beside a giant mural of former NBA basketball player Kobe Bryant and daughter Gianna at a basketball court in Taguig, south of Manila, Philippines. Artists in this tenement building gathered and painted this image after learning of Bryant's death. Bryant, his daughter and 7 others died in a helicopter crash. (AP PhotoAaron Favila, File) 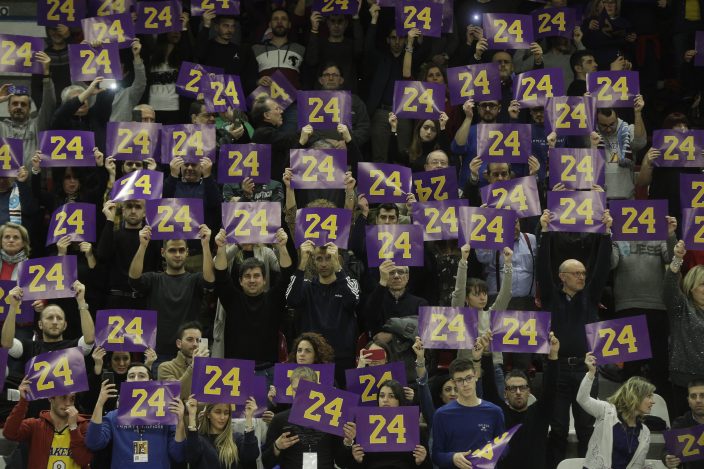 FILE - In this Feb. 5, 2020, file photo, spectators pay tribute to basketball legend Kobe Bryant prior to the start of the Italian Basketball second division match between Rieti and Scafati in Rieti's PalaSojourne, Italy. Bryant spent seven years of his childhood in Rieti, where his father, Joe Bryant, made his Italian basketball debut in 1984 when Kobe was 6 years-old. (AP PhotoGregorio Borgia, File) 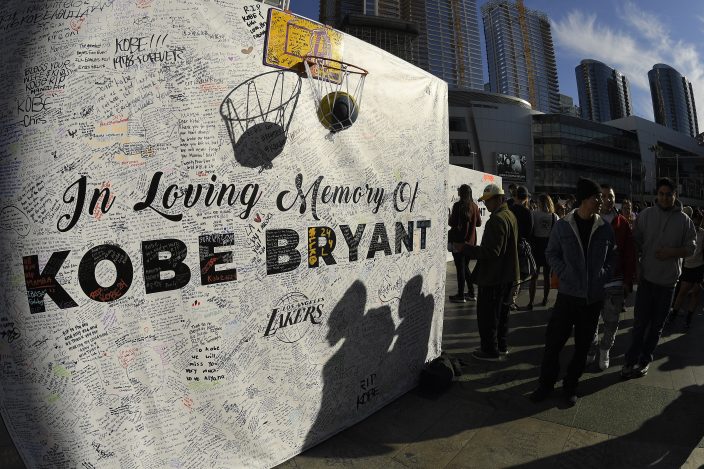 FILE - In this Jan. 28, 2020, file photo, shadows are cast on a memorial wall as fans gather at LA Live, near Staples Center where the Los Angeles Lakers play, to memorialize Kobe Bryant in Los Angeles following a helicopter crash that killed the former NBA basketball player, his 13-year-old daughter, Gianna, and seven others. (AP PhotoMark J. Terrill, File) 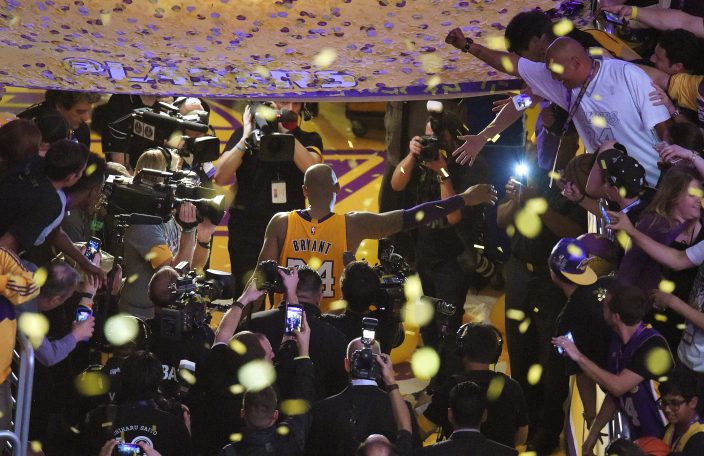 FILE - In this April 13, 2016, file photo, Los Angeles Lakers forward Kobe Bryant walks off the court after finishing his last NBA basketball game before retirement in Los Angeles. Bryant, the 18-time NBA All-Star who won five championships and became one of the greatest basketball players of his generation during a 20-year career with the Los Angeles Lakers, died in a helicopter crash Sunday, Jan. 26, 2020. (AP PhotoMark J. Terrill, File)

In the NBA, there's not much home-court advantage these days

Analysis: In tough NBA times, games not the top priority

Analysis: Amid a pandemic, a blowout epidemic also happening

In the NBA this season, teams will see same refs more often

Practice time will be in short supply in NBA this season

James surges, Giannis sits and a reminder health is the key