Feller, who opened the race wearing bib No. 1, shook his head after finishing but no racer matched the Austrian’s pace on the Planai course.

Feller led Sebastian Foss-Solevåg of Norway by 0.39 seconds as the winners of the last two slaloms, in nearby Flachau last week, placed 1-2. “Starting first it is hard to know if you had a good run. I thought I was late on many turns, but it seemed my run wasn’t that bad after all,” Feller said.

Feller can become the first to win two slaloms this season, after the first six races produced as many different winners. 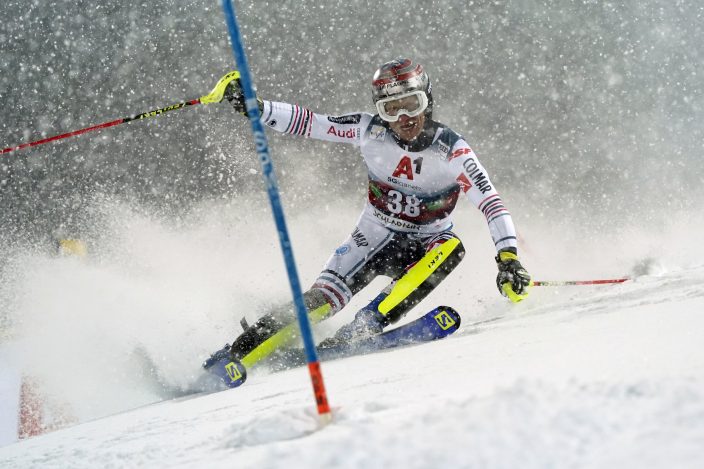 Overall World Cup leader Alexis Pinturault was 1.73 behind and Henrik Kristoffersen, who won the season-long slalom title last year, finished 2.60 off the pace.

Loic Meillard finished with blood on his face after the Swiss skier was hit by a gate during his run.

Retiring after 21 years on the World Cup circuit, Julien Lizeroux just missed qualifying for the second run in the final race of his career, four hours after his girlfriend, Tessa Worley, won a women’s giant slalom in Italy.

The Frenchman took off his bib in the finish area and dropped it, while saying into a TV camera: "Lizeroux: Out!"

His best years were 2009 and 2010, when he placed third and second respectively in the slalom standings and won silver medals in slalom and super combined at the 2009 world championships in Val d’Isère.

Lizeroux and Worley were both part of the French team that won the team event at the worlds in St. Moritz four years ago.

The night slalom is usually attended by up to 45,000 spectators lining up along both sides of the course, but no visitors were allowed this time amid strict anti-coronavirus measures in Austria.

After spending more than four year ...