Lebanon hit a new daily record for COVID-19 fatalities Tuesday, registering 73 deaths as protesters took to the streets for a second day to denounce strict lockdown measures put in place to curb an exhausting surge in infections.

The health ministry said the number of virus-related deaths, which in a day climbed above 60 for the first time, reached nearly 2,500 in the small country.

Daily infections have soared in recent weeks and hospitals have struggled with COVID-19 patients, reporting near full occupancy in ICU beds. Nearly 286,000 infections have been recorded since last February. 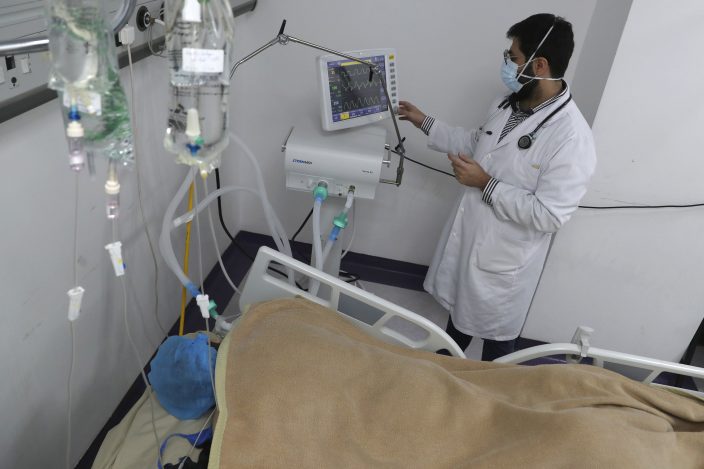 A medical staffer checks the data of a COVID-19 patient on a screen at the intensive care unit of the Rafik Hariri University Hospital in Beirut, Lebanon, Friday, Jan. 22, 2021. Hospitals in Lebanon are reaching full capacity amid a dramatic surge in coronavirus cases across the crisis-hit Mediterranean nation even amid strict lockdown. (AP PhotoBilal Hussein)

To respond to the crisis, the government imposed a nearly month-long nationwide lockdown, the strictest since the virus hit Lebanon.

Measures in place since mid-January to fight the virus' spread have been criticized by many as coming too late, particularly after the government relaxed previous restrictions to allow for holiday season spending from visiting expats. Many saw the relaxation as the reason for the worsening of a surge in infections already in full swing in December.

On Tuesday, dozens of protesters took to the streets in Tripoli, Lebanon’s second largest city and most impoverished, for the second straight day demanding an end to the lockdown and questioning the government’s management of what some called a contrived health crisis. 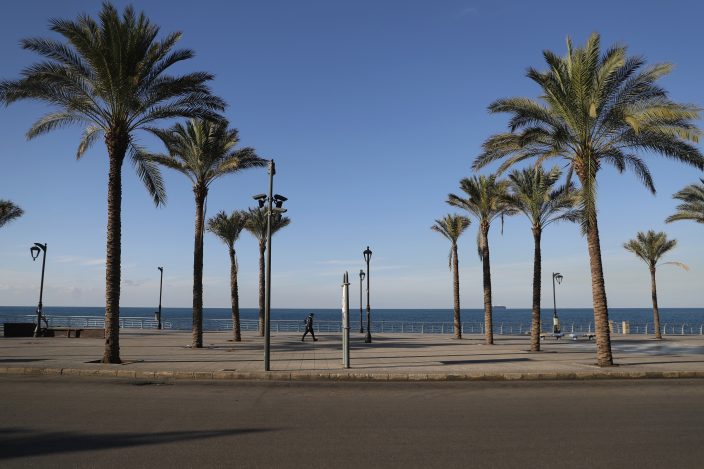 A man walks on a deserted waterfront promenade during a lockdown aimed at curbing the spread of the coronavirus, in Beirut Lebanon, Thursday, Jan. 21, 2021. Authorities on Thursday extended a nationwide lockdown by a week to Feb. 8 amid a steep rise in coronavirus deaths and infections that has overwhelmed the health care system. (AP PhotoBilal Hussein)

Protesters pelted government offices with stones and blocked a main square. The army was deployed to contain the rioters, who torched a vehicle parked in the area, according to Lebanon’s National News Agency .

Dozens also gathered in central Beirut, blocking two major thoroughfares in the city's east and north. Protesters also burned tires and blocked the highway between Beirut and the south.

In the eastern Bekaa region, smoke and fire rose above the highway linking the area to the capital as dozens of protesters burned tires and trash canisters. 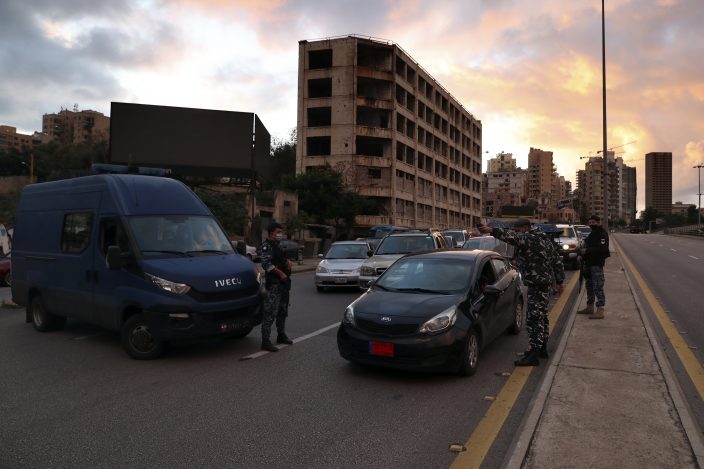 Police officers stand at a checkpoint to inspect cars that violate the lockdown during an 11-day nationwide shutdown aimed at curbing the spread of the coronavirus, in Beirut, Lebanon, Friday, Jan. 15, 2021. Lebanon's parliament has approved a draft law to allow the importing of vaccines into the tiny country to fight the spread of coronavirus. (AP PhotoBilal Hussein)

“The street is exploding again,” read the lead into the evening news bulletin on the private LBC TV station.

Lebanon, a country of nearly 5 million and over 1 million refugees, is going through an unprecedented economic crisis that preceded the pandemic and restrictions imposed to combat it.

The country's currency has tumbled, losing over 80% of its value. Banks have imposed controls on withdrawals and transfers to protect dwindling foreign reserves. Unemployment and inflation have skyrocketed.

Lebanon’s ruling class has faced rising popular anger since Lebanese took to the streets in the largest-ever nationwide protests in October 2019. Demonstrators accused them of mismanaging and robbing the country of its resources and driving it into poverty. The protests died down in part because of the pandemic but also because the political class held on to power and divisions emerged among the demonstrators.

Meanwhile, the cash-strapped government wasn't prepared to provide assistance for struggling businesses or the unemployed. A massive explosion last summer in Beirut Port killed over 200 people and injured thousands, causing severe destruction in the city and worsening economic conditions.