The interim chief of the Capitol Police apologized Tuesday for failing to prepare for what became a violent insurrection despite having warnings that white supremacists and far-right groups would target Congress.

Yogananda Pittman, in prepared testimony before Congress, said that the Capitol Police “failed to meet its own high standards as well as yours." She listed several missteps: not having enough manpower or supplies on hand, not following through with a lockdown order she issued during the siege and not having a sufficient communications plan for a crisis.

“We knew that militia groups and white supremacists organizations would be attending,” Pittman wrote. “We also knew that some of these participants were intending to bring firearms and other weapons to the event. We knew that there was a strong potential for violence and that Congress was the target.” 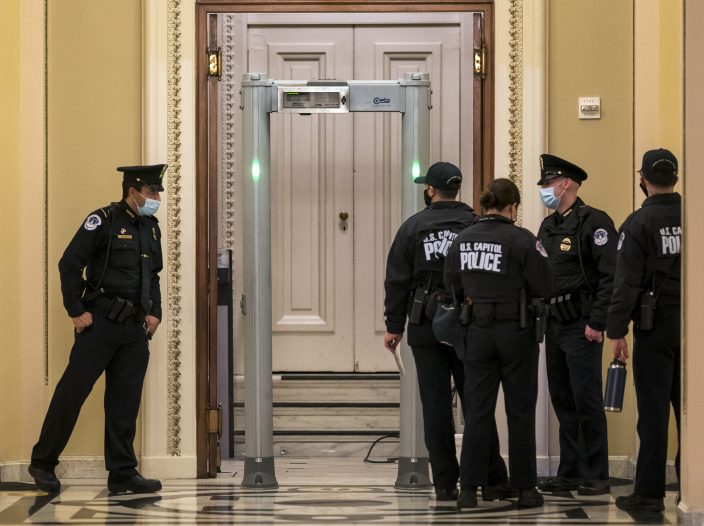 U.S. Capitol Police survey the corridor around the House of Representatives chamber after enhanced security protocols were enacted, including metal detectors for lawmakers, after a mob loyal to President Donald Trump stormed the Capitol, in Washington, Tuesday, Jan. 12, 2021. (AP PhotoJ. Scott Applewhite)

Her admissions come as U.S. law enforcement investigate a number of threats aimed at members of Congress and as the second impeachment trial of former President Donald Trump gets underway. A law enforcement official told The Associated Press that authorities have detected ominous chatter about killing legislators or attacking them outside the Capitol.

Trump supporters tore down fences and broke through doors and windows after an event in which the now-former president called on them to “fight” and “stop the steal.” Inside the building, Congress was certifying the victory of President Joe Biden. Five people died, including Capitol Police Officer Brian Sicknick, who was hit in the head with a fire extinguisher. A sixth person, another Capitol Police officer, later died by suicide.

The day after the riot, then-Capitol Police Chief Steven Sund said that his force “had a robust plan established to address anticipated First Amendment activities.” Sund has since resigned, as have the sergeants-at-arms for the House and Senate. 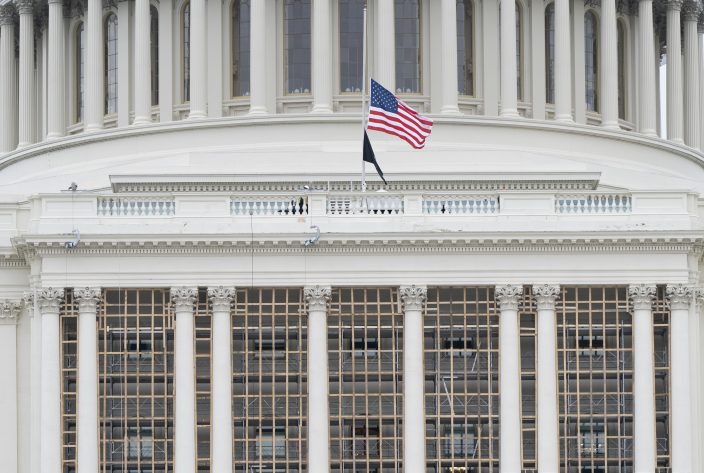 The U.S. flag is at half-staff in memory of Capitol Police Officer Brian Sicknick, Friday, Jan. 8, 2021, in Washington. Sicknick died of injuries he received from rioters on Wednesday. (AP PhotoJacquelyn Martin)

Officers who have spoken to the AP described being overrun by insurrectionists who in many cases were more armed than they were. The officers said they were given next to no plan beforehand or communication during the riot.

Both Pittman and Timothy Blodgett, the acting House sergeant-at-arms, told Congress on Tuesday that they need stronger communications and more fortifications around the Capitol building. Blodgett called on members of Congress to prepare for future emergencies and offered training for any offices that requested it.

“You want people to have some level of access to the government,” said Rep. Tim Ryan, D-Ohio. But he noted that it's also important that they feel protected and positioned to respond quickly to anything that might happen.