From a wood-paneled library in his Boston mansion, new climate envoy John Kerry is talking the U.S. back into a leading role in global climate action, making clear the nation isn't just revving up its own efforts to reduce oil, gas and coal pollution but that it intends to push everyone in the world to do more, too.

Kerry’s diplomatic efforts match the fast pace of domestic climate directives by the week-old Biden administration, which created the job Kerry now holds. Those directives include a Biden order expected Wednesday spelling out how U.S. intelligence, defense and homeland security agencies should address the security threats posed by worsening droughts, floods and other natural disasters under global warming.

At 77, Kerry is working to make a success out of the global climate accord that he helped negotiate in Paris as President Barack Obama’s secretary of state — and that he then saw rejected by President Donald Trump, who also spurned all other Obama-era legacy efforts to wean the U.S. and global economies off climate-damaging fossil fuels. 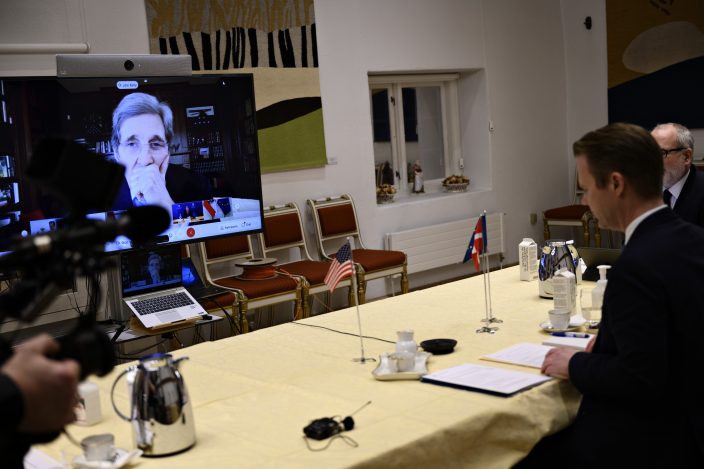 Success for Kerry is hardly assured. At home, he faces pushback from the oil and gas industry and hears concerns that jobs will be lost. Internationally, there's uncertainty about whether Biden's climate commitments can survive the United States' intensely divided politics, let alone the next presidential transition.

Meanwhile, environmentalists are pushing him to be aggressive — even demonstrating outside his house on his first full day on the job.

Underscoring the urgency, Kerry -- working from his home on Boston’s patrician Beacon Hill during the COVID-19 pandemic -- sat before a computer screen and started talking before sunup last Thursday, his first full day in his new job, to government ministers in Europe.

Since then, he has spoken virtually with U.S. mayors, foreign presidents and premiers, international business leaders and others, until the light from the setting sun slides down the gilt spines of the shelves of leather-bound books in his library.

If China and the U.S., as the world’s No. 1 and 2 top carbon emitters, don’t spell out exactly how they will curb climate-damaging emissions more quickly, “we’re all going to lose credibility,” Kerry told an online gathering of American mayors last weekend.

The U.S. has to have the “credibility to go to the table, show people what we’re doing and push them to do more,” Kerry said then. “So everybody can can understand it’s not fake, it’s not a phony, empty promise — it really is getting real."

Kerry is a full-time principal member for climate on the White House's National Security Council. The role acknowledges what climate and military experts say will be growing conflicts around the world as climate change increases competition for natural resources. It takes into account a lack of U.S. readiness to protect military installations and overall infrastructure from worsening flooding and other natural disasters as temperatures rise.

By giving someone of Kerry's stature a job with equally high prominence, Biden aims to “bring the climate issue into the conversation” on national security matters routinely, said John Podesta, a climate counselor for Obama and a White House chief of staff for President Bill Clinton.

Kerry is expected to have desks at both the White House and the State Department.

In the meantime, the home library where Kerry now holds most of his big online meetings earned him a 10 out of 10 from the popular “Room Rater” Twitter account that judges the backdrop décor in people's Zoom calls and TV appearances. That's despite expressing doubt about whether it was a room or a set.

Kerry and other Biden administration climate leaders will be working to set a tougher goal for the U.S. for cutting emissions, as well as making good on pledges to increase climate funding for poorer countries.

On Thursday, the progressive Sunrise Movement's Boston branch had demonstrators outside his Boston house holding signs saying “Kerry be brave." The move shows the left keeping up pressure for what could be a politically tricky level of aggressiveness on cutting fossil fuels.

“Our role is ... now to hold them accountable,” Sunrise Movement spokesperson Ellen Sciales said Tuesday, and keep them “pushing us forward to meet the scale and the urgency of the climate crisis.”

On the right, some Republican lawmakers and the politically influential oil and gas industry have been subdued in the first week of the Biden administration, saying they hope to work with Kerry and others on climate efforts.

Kerry told the mayors he talked with Democratic Sen. Joe Manchin of West Virginia at Biden's Jan. 20 inauguration. Kerry said he and Manchin, who has fought climate regulation he sees threatening his coal state's economy, agreed: Winning the U.S. fight on climate change will depend on getting renewable-energy jobs into places like West Virginia and Tennessee as soon as possible.

Then, "boom, you will begin to have believers,” Kerry declared from his library. “They're not going to believe it when we just say it. We have to do it.”