David Perron and Brayden Schenn scored in a shootout to lift the St. Louis Blues over the Vegas Golden Knights 5-4 on Tuesday night.

Max Pacioretty got his seventh career hat trick for the Golden Knights, who were missing their entire coaching staff because of COVID-19 concerns. General manager Kelly McCrimmon took over head coaching duties and was assisted by staff from the team’s minor league affiliate in the AHL, the Henderson Silver Knights. 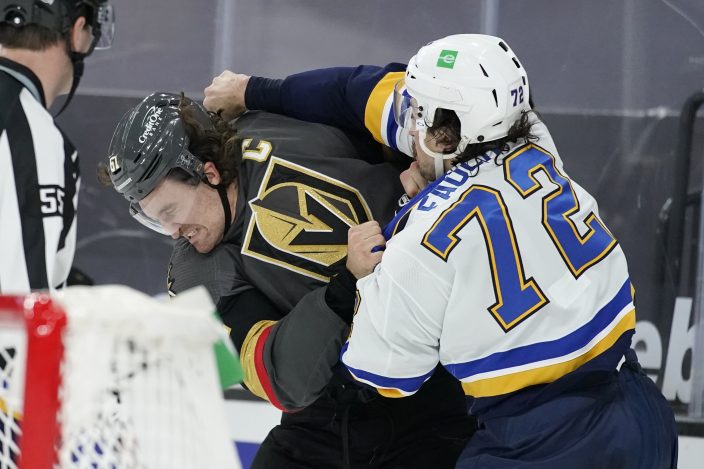 Jordan Binnington was brilliant in net for the Blues, making 42 saves.

Alex Tuch added a goal for Vegas. Shea Theodore scored during the shootout, and Robin Lehner made 21 saves.

It marked the fifth time in 11 all-time meetings that the teams played into overtime since Vegas entered the NHL in 2017. 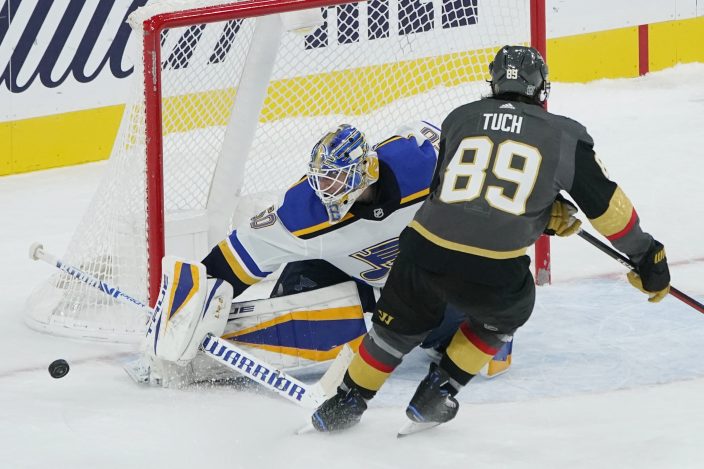 Not only did the Golden Knights (5-1-1) lose for the second time in three games, but they were disrupted by coronavirus for the first time this season. Roughly two hours before puck drop the team announced it would be without its coaching staff.

The club said the entire staff, including head coach Peter DeBoer, would self-quarantine “out of an abundance of caution.” Vegas’ staff is comprised of DeBoer, assistants Steve Spott, Ryan Craig and Ryan McGill, and goaltending coach Mike Rosati.

McCrimmon stepped in behind the bench and was assisted by head coach Manny Viveiros and assistants Jamie Heward and Joel Ward from the Silver Knights. 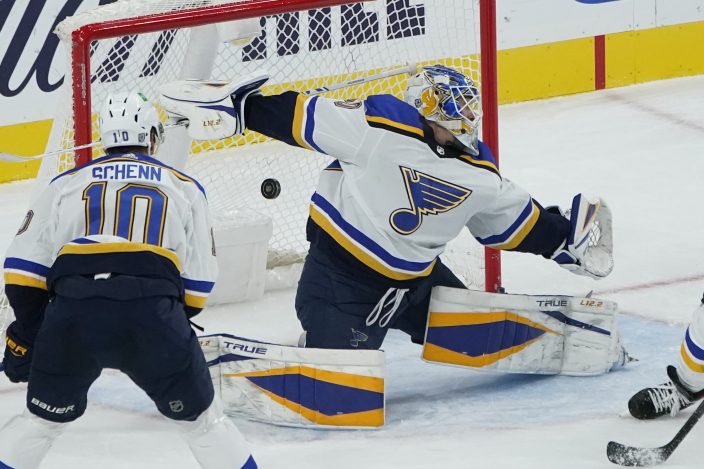 It marked the first time a Vegas player or coach missed a game this season because of the virus. Four Golden Knights tested positive in November, and all recovered in time for the opener.

Tuch put the Golden Knights on the board 3:17 into the game when he raced down right wing and beat Binnington for his sixth point in seven games. After that, the Blues (4-2-1) took over.

Perron tied it with a nifty wrist shot that sneaked between Lehner and the post less than a minute later. Perron got his second of the game and third of the season just six seconds into St. Louis’ first power-play opportunity, sending a blistering slap shot past Lehner’s blocker. 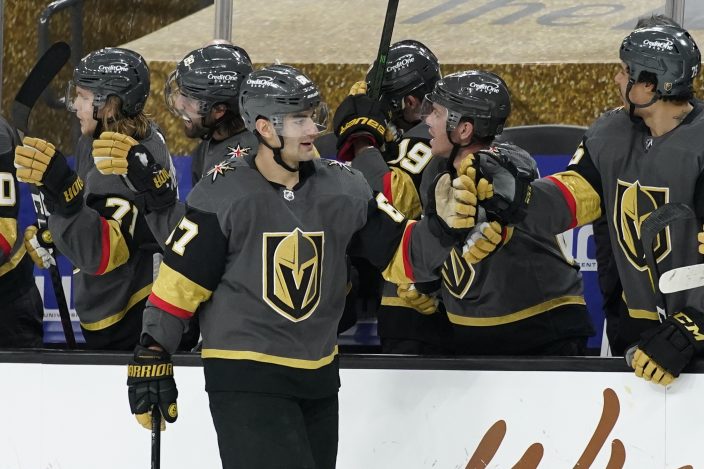 Two minutes later it was Schwartz with St. Louis’ third unanswered goal in the opening period when he sent a shot off the crossbar and in, pushing the lead to 3-1.

Pacioretty cut the deficit to one with a snapper from the slot early in the second. He’d later ring one off the crossbar, and the carom landed on Pietrangelo’s stick.

Kyrou poked the puck free from his former teammate, skated by Pietrangelo and while holding him off into the offensive zone, gathered the puck and roofed a wrist shot Lehner never even saw to give St. Louis a 4-2 lead. 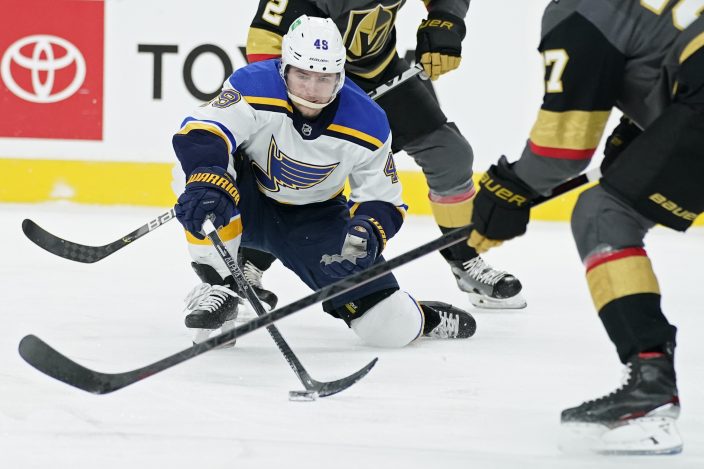 Pacioretty got his second goal of the night when he sent a wicked wrist shot from the blue line through traffic and benefited from a perfect screen from William Karlsson to beat Binnington. 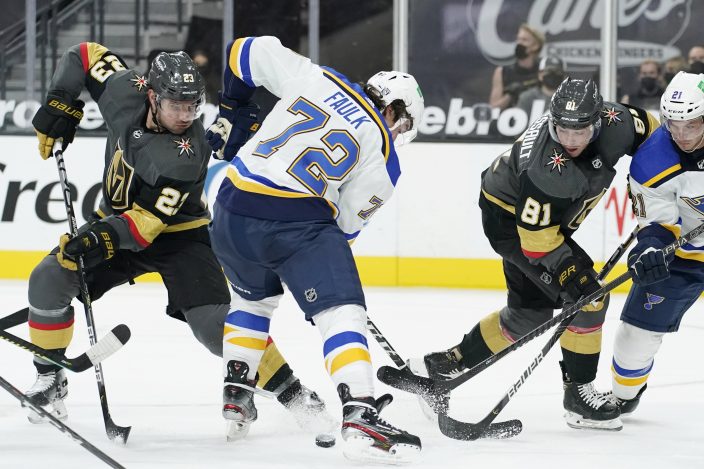 Vegas and St. Louis close their two-game series at T-Mobile Arena on Thursday. It is unclear if DeBoer and his assistants will be cleared to return by then. 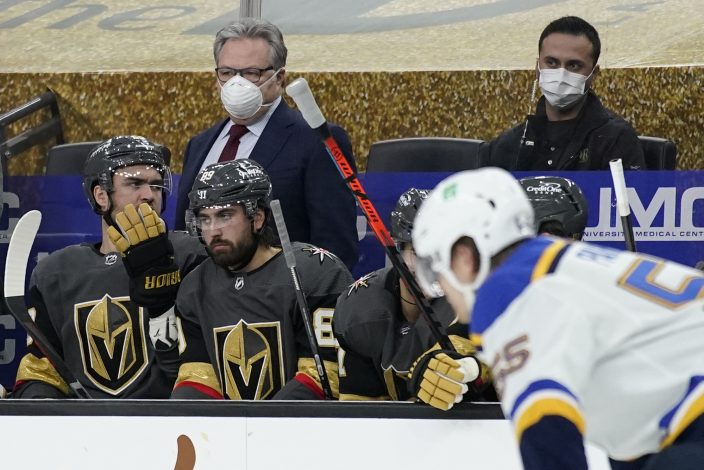 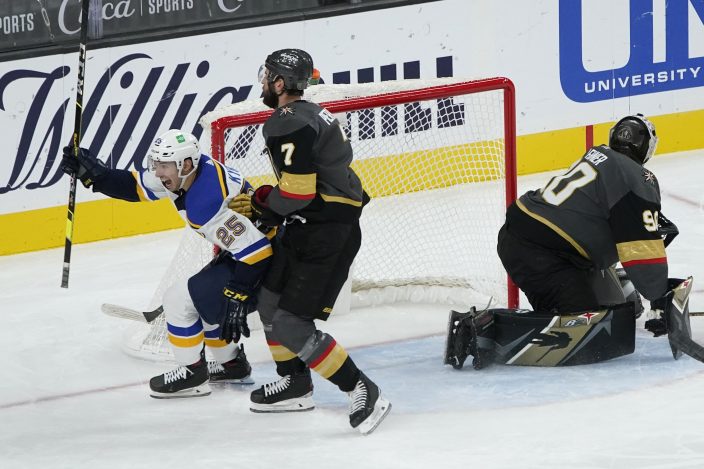