PARIS — French drug maker Sanofi says it will help manufacture 125 million doses of the coronavirus vaccine developed by rivals Pfizer and BioNTech, while its own vaccine candidate faces delays.

Germany-based BioNTech will initially produce the vaccines at Sanofi facilities in Frankfurt, starting in the summer, according to a Sanofi statement Wednesday. The company did not reveal financial details of the agreement.

The French government has been pressing Sanofi to use its facilities to help make rival vaccines, given high demand and problems with supplies of the few vaccines that are already available. 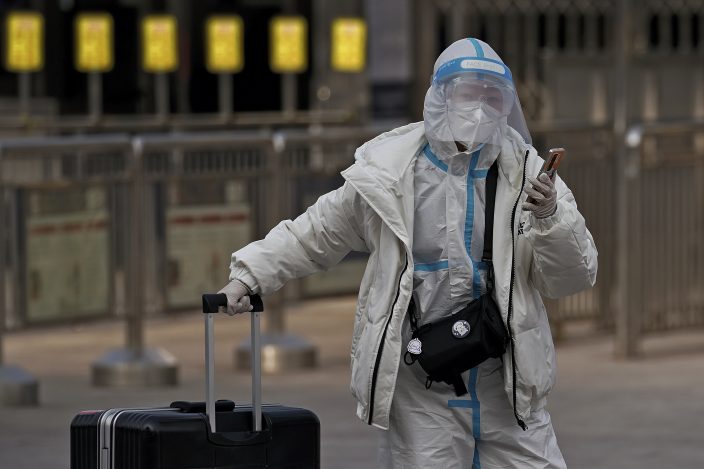 A woman wearing a protective gear to help curb the spread of the coronavirus walks with her luggage arrives to the railway station to catch her train in Beijing, Wednesday, Jan. 27, 2021. China has given more than 22 million COVID vaccine shots to date as it carries out a drive ahead of next month's Lunar New Year holiday, health authorities said Wednesday. (AP PhotoAndy Wong)

Sanofi and British partner GlaxoSmithKline will start a new phase-2 trial of their COVID-19 vaccine next month, Sanofi said. The two companies said last month that their vaccine won’t be ready until late 2021 because the shot’s effectiveness in older people needed to be improved.

BEIJING — China has given more than 22 million coronavirus vaccine shots to date as it carries out a drive ahead of next month’s Lunar New Year holiday, health authorities said Wednesday.

The effort, which began six weeks ago, targets key groups such as medical and transport workers and has accelerated vaccinations in China. About 1.6 million doses had been given over several months before the campaign began.

“The carrying out of vaccination has been ongoing in a steady and orderly manner,” Zeng Yixin, vice chairman of the National Health Commission Said at a news conference.

He said that 22.76 million doses had been administered as of Tuesday. It’s not clear how many people that represents since the vaccine is given in two doses, and some may have received their second shot.

China, which largely stopped the spread of the virus last spring, has seen fresh outbreaks this winter in four northern provinces. About 1,800 new cases have been reported since mid-December, including two deaths.

Authorities are strongly discouraging people from traveling during the Lunar New Year holiday, a time when Chinese traditionally return to their hometowns for family gatherings.

NEW DELHI — India has vaccinated 2 million health workers in less than two weeks and recorded 12,689 new coronavirus positive cases in the past 24 hours, a sharp decline from a peak level of nearly 100,000 in mid-September.

The health Ministry said the daily new cases had fallen below 10,000 on Tuesday with 9,102 cases. The daily new positive cases were 9,304 on June 4 last year.

India’s fatalities dropped to 137 in the past 24 hours from a peak level of 1,089 daily deaths in September. India’s total positive cases since the start of the epidemic have reached 10.6 million, the second highest after the United States with 25.43 million cases.

India is home to the world’s largest vaccine makers. Authorities hope to give shots to 300 million people. The recipients include 30 million doctors, nurses and other front-line workers.

SEOUL, South Korea -- South Korea has reported new 559 cases of the coronavirus, its highest daily increase in 10 days, as health workers scrambled to slow transmissions at religious facilities, which have been a major source of infections throughout the pandemic.

The figures released by the Korea Disease Control and Prevention Agency on Wednesday brought the national caseload to 76,429, including 1,378 deaths.

The agency said 112 of the new cases came from the southwestern city of Gwangju where more than 100 infections have so far been linked to a missionary training school. An affiliated facility in the central city of Daejeon has been linked to more 170 infections.

Nearly 300 of the new cases came from the Seoul metropolitan area, home to half of the country’s 51 million people, where infections have been tied to various places, including churches, restaurants, schools and offices.

The infected person is an Anchorage resident who had traveled to a state where the variant had already been detected, the Alaska health department said. The person first experienced symptoms on Dec. 17, was tested three days later and received a positive result on Dec. 22.

The resident lived with another person in Anchorage, who also became ill. Both isolated and have since recovered, officials said.

It was not yet clear if the second person also was infected with the variant.

Dr. Joe McLaughlin, the state epidemiologist, said in a news release that the discovery of the variant is not surprising because viruses “constantly change through mutation.”

He said this is one of several “variants that has been carefully tracked because it appears to spread more easily and quickly than other strains of the virus.”

BOSTON — In his annual State of the Commonwealth address, Republican Gov. Charlie Baker defended his vaccine distribution plan, which some have criticized for being confusing and too narrowly focused at first.

Baker said the state is prepared to distribute and administer all the vaccine shots delivered by the federal government and is rapidly expanding the number of vaccination sites.

“Vaccinating 4 million adults in Massachusetts as the doses are allocated by the federal government is not going to be easy. But be assured that we will make every effort to get this done as quickly and efficiently as possible,” he said. “We can only move as fast as the federal government delivers the vaccines.”

SEATTLE - Washington Gov. Jay Inslee on Tuesday touted big improvements in distributing the COVID-19 vaccines, but he also urged residents to remain vigilant as new, more contagious variants of the disease spread in the state.

The number of vaccines actually administered could be even higher, given lags in reporting, but as of Monday more than 500,000 doses had been administered statewide, with four mass vaccination sites due to open this week.

President Joe Biden announced Tuesday the federal government is boosting vaccine supplies to the states by 16% over the next three weeks, giving states more certainty about upcoming deliveries than the one-week notice the Trump administration had been providing.

The Latest: Germany sees drop in new cases levelling off

The Latest: UK invests in studies of long COVID-19 syndrome

The Latest: UK to urge cease-fires to allow vaccinations