The 2017 murder of Swedish journalist Kim Wall had all the gruesome elements of a modern true-crime classic. Writer and director Tobias Lindholm initially disagreed.

The young woman had been decapitated in a homemade submarine. The perpetrator had tortured and sexually assaulted her. He cut off her limbs and threw them overboard in weighted bags.

“People around me would say, ‘That would make a great movie,’" says Lindholm from his home in Copenhagen. "And I just couldn’t see it. I couldn’t see the reason to tell this story.” 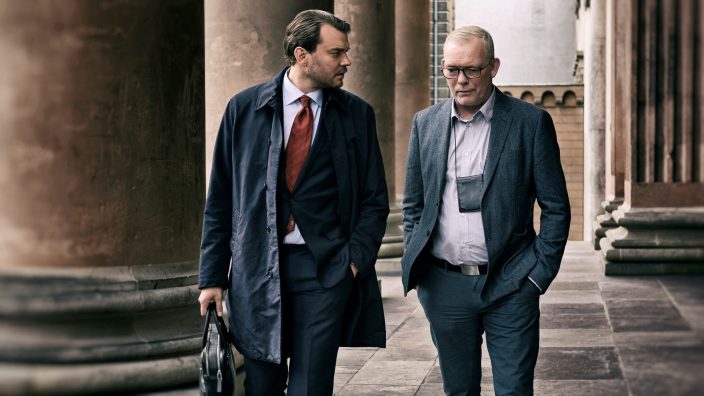 This image released by HBO shows Pilou Asbaek, left, and Soren Malling in a scene from the limited miniseries “The Investigation" about the 2017 murder of Swedish journalist Kim Wall. (HBO via AP)

The submarine case had already generated lurid stories in the Scandinavian tabloids and clickbait headlines online. One way to retell the story was to go over-the-top — showing the bloody underwater crime scene and limbs being hacked off.

“It would be tasteless and inhumane and there would be no reason to do that,” Lindholm says. “Other than fascination with a brutal crime, what would be the real, responsible storyteller reason to touch this story?”

After meeting members of the police and the victim's family, Lindholm went the opposite direction: Viewers never see or hear the accused in the limited miniseries “The Investigation,” which premieres on HBO on Feb. 1 and is available to stream on HBO Max.

This image released by HBO shows Rolf Lassgard, left, and Pernilla Augusta in a scene from the limited miniseries “The Investigation" about the 2017 murder of Swedish journalist Kim Wall. (HBO via AP)

Viewers don't just never see the murderer, they also never see the victim in flashbacks or visit the autopsy table. They never go into the cold water with the divers to find the bags. There's not a drop of blood shown in the entire six hours — almost an inverse of “The Killing,” the Danish series that helped kick off a wave of grim and bleak detective procedurals in 2007.

Instead of the crime, the show explores the close relationship forged between Wall's grief-stricken parents and the head of homicide, whose pursuit of the case has personal costs. The camera follows the dogged detectives seeking a logical and scientific cause of death that can convict the accused. 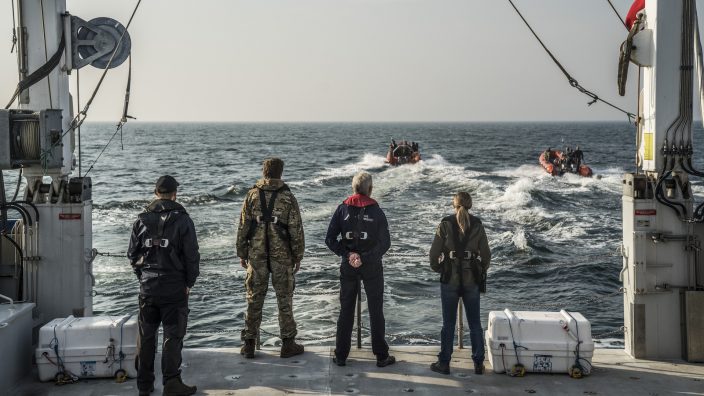 This image released by HBO shows a scene from the limited miniseries “The Investigation" about the 2017 murder of Swedish journalist Kim Wall. (HBO via AP)

“It was about people in uniform that stood together and actually helped complete strangers through a very hard time,” he adds. “It’s not a story that we seem to share too much with each other these years.”

It is a moody, meditative and patient show. Many scenes are silent, with detectives pouring over binders of evidence or with divers scanning the horizon. The camera deliberately includes scenes of actors just driving or thinking, moments usually excised from American dramas.

Lindholm — whose reality-based feature films include “A Hijacking” and the Oscar-nominated “A War” — cites the Baltimore-based series “The Wire” as a big influence, with its tendency to detour from the plot to show men and women just doing their — sometimes tedious — jobs.

He explained his vision to producers at the outset, and they backed him for the six-part series that is subtitled for English viewers. He was well aware of commercial pressures to go lurid but insisted that the monster at the show's heart would never be shown.

“It’s like these days when my kids want candy every day because we’re home all the time. It’s just not going to happen. So they won’t ask me. They know that ‘no’ would be the answer,” he says, laughing.

There is a documentary feel to the series, one carefully tethered to reality. Lindholm employed the same cadaver dogs used in the actual murder case, used the same crane ship that recovered the sub and even asked the same police divers to recreate their steps.

"Divers dive much better than actors and actors act much better than divers," he explains. “If I was not to make the same mistake that I felt the media had done already by limping towards a true crime fascination, I would need a lot of elements from reality to keep me straight on track.”

In many ways, Lindholm's series is the reverse of his own past. He worked with David Fincher on the “Mindhunter” series, which was obsessed with getting inside the mind of killers because that's how the FBI catches them.

“Here we had a chance to actually tell a story where we could be fascinated by a very difficult investigation and where we could liberate ourselves from that cliché,” he says.

“And the fact that it’s so radical to leave out the perpetrator tells me that that is probably something we should do a bit more in the future.”

Lindholm notes that he's a huge fan of “The Killing,” which kicked off a wave of so-called Nordic noir shows. He credits that series' success with his ability to create the political drama “Borgen.”

“Nevertheless, I kind of felt that we could end the circle,” he says. "They did ‘The Killing.’ Now we did ‘The Investigation’ and maybe we could all start to do something different.”