The Denver Nuggets might not want this road trip to end.

The Miami Heat cannot get Jimmy Butler back quickly enough.

Nikola Jokic had 21 points and 11 rebounds as the Nuggets won their fifth straight, building a 25-point halftime lead and beating the Heat 109-82 on Wednesday night. 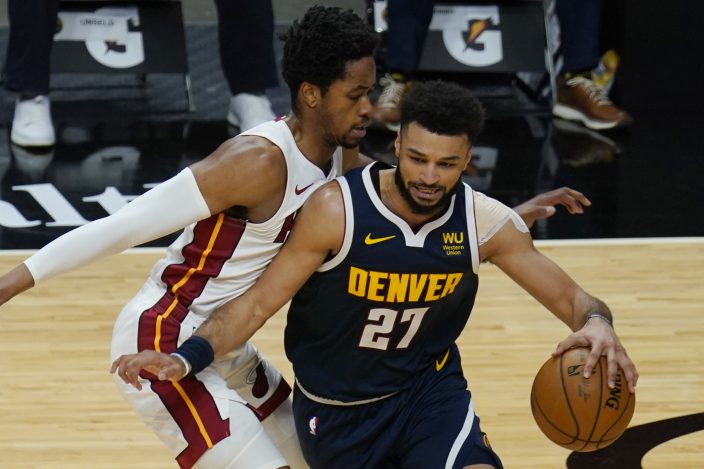 Miami Heat forward KZ Okpala (4) guards Denver Nuggets guard Jamal Murray (27) as he drives to the basket during the first half of an NBA basketball game, Wednesday, Jan. 27, 2021, in Miami. (AP PhotoMarta Lavandier)

Michael Porter Jr. scored 17 points, JaMychal Green added 15 and Jamal Murray had 14 for Denver, which improved to 4-0 on its five-game road trip — the first time the Nuggets have won four games on a trip of any length since December 2013. A win Friday in San Antonio would give Denver its first 5-0 road swing since January 2012.

Butler watched from the Miami bench, a significant accomplishment since Wednesday’s game was the first in more than two weeks where he could be with his team again. He hasn’t played in any of the last nine Heat games because of virus-related protocols.

The Heat are 2-7 in this stretch without him, with losses now in four consecutive games. They also played again without Tyler Herro, who missed a seventh consecutive game with neck spasms. Goran Dragic (groin) was also out, and Kendrick Nunn led Miami with 17 points. 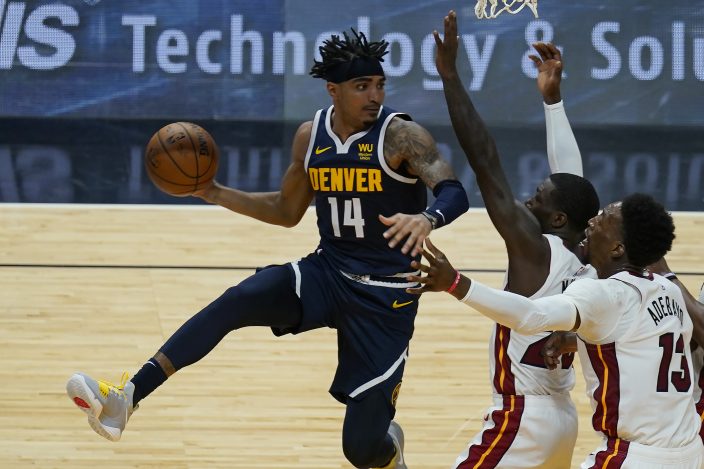 The Heat got Avery Bradley back for the first time in nine games; he, like Butler, was out in accordance with the NBA’s virus protocols. Bradley had eight points in 18 minutes.

Denver led 58-33 at the half, the Nuggets’ biggest halftime lead this season and biggest in a road arena since holding a 31-point lead at the break in Chicago on March 21, 2018. The Heat missed 15 3-pointers in the first quarter — an NBA record for an opening period, and a team record for any quarter.

Denver’s lead was down to seven early in the fourth, but back-to-back 3s by Porter and Green got the Nuggets’ edge back to 13 and another 3 by Jokic made it 94-74 with 5:35 left. 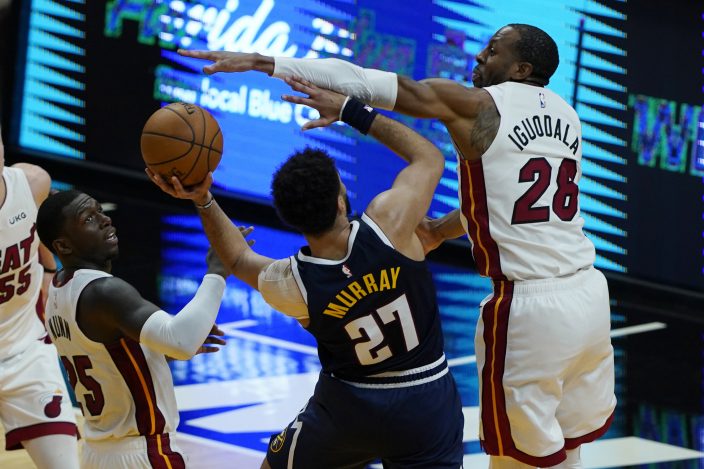 Miami Heat forward Andre Iguodala (28) blocks a drive to the basket by Denver Nuggets guard Jamal Murray (27) during the second half of an NBA basketball game, Wednesday, Jan. 27, 2021, in Miami. (AP PhotoMarta Lavandier)

Nuggets: Guard P.J. Dozier (right hamstring strain) missed the game and the Nuggets are bracing for it to be a multi-game absence. ... The 33 points allowed by Denver in the first half was not only a season best, but it was nearly 24 points below the Nuggets’ average through the first 17 games. 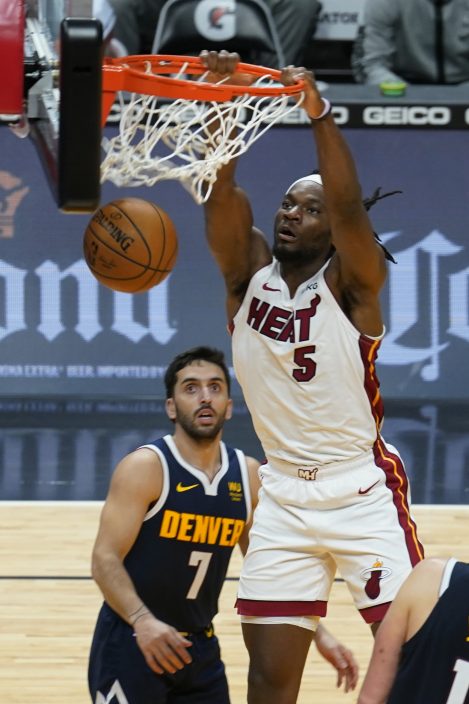 Heat: Wednesday was the start of a six-game homestand for Miami. After that, the Heat play eight of their next nine on the road. ... Duncan Robinson’s first 3-pointer Wednesday was the 400th of his career, including playoffs. He’s the 12th Heat player to make that many.

The Heat held a pregame moment of silence to commemorate Tuesday being the one-year anniversary of Kobe Bryant’s death and last week’s death of Baseball Hall of Famer Hank Aaron. And in his pregame remarks Wednesday, Nuggets coach Michael Malone paid tribute to longtime NBA journalist Sekou Smith, who died Tuesday after a short battle with COVID-19. “I’m devastated for his family,” Malone said. 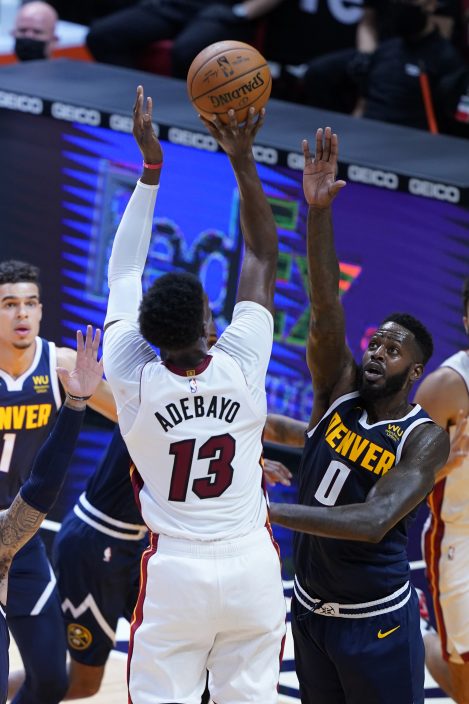 Miami is welcoming back a small number of fans Thursday, with coronavirus-detection dogs being utilized to screen guests before entering the arena.