Tobias Harris made a jumper with 3 seconds left, ending the Lakers’ 13-0 run and sending the Philadelphia 76ers to a 107-106 victory over Los Angeles on Wednesday night. 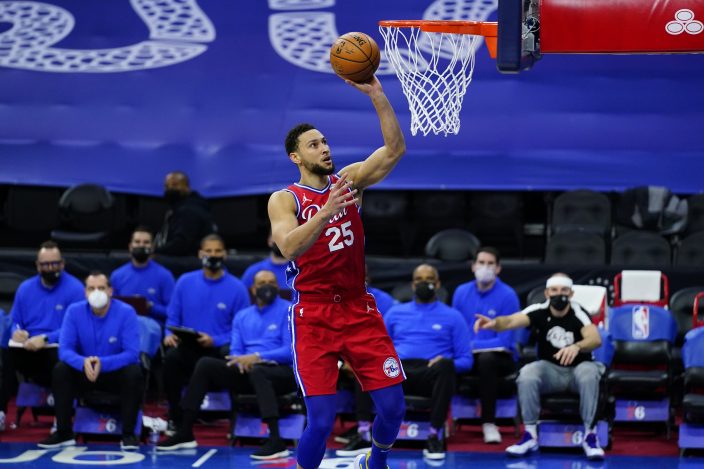 Philadelphia 76ers' Ben Simmons goes up for a shot during the second half of an NBA basketball game against the Los Angeles Lakers, Wednesday, Jan. 27, 2021, in Philadelphia. (AP PhotoMatt Slocum)

Embiid appeared to have hurt his back when he was knocked down by James.

Embiid, the All-Star center off to the best start of his career, drove down the baseline for an attempted right-handed dunk when James pushed him in flight. Embiid crashed hard on his tailbone, immediately grabbed his back and writhed on the court in pain as James simply looked down and walked past him. After a short video review, James was hit with a flagrant 1 -- “unnecessary contact committed by a player against an opponent” -- and Embiid sank both free throws. Embiid was quickly hit with his own flagrant when his elbow connected with Davis’ face on a drive to bucket. 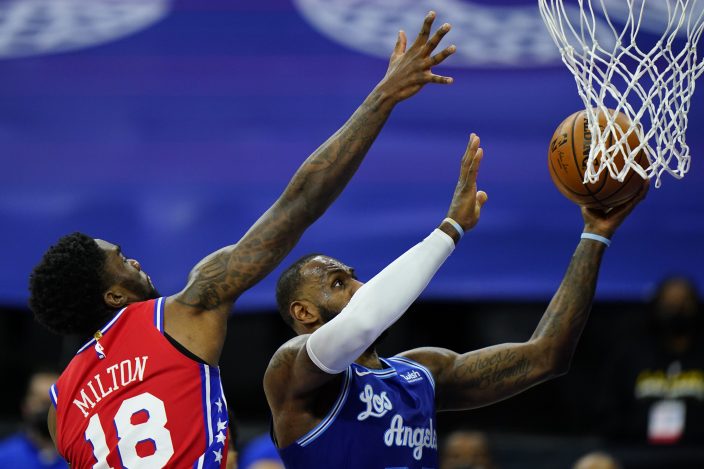 The Lakers suffered their first road loss of the season in 11 games.

Nikola Jokic had 21 points and 11 rebounds and Denver won its fifth straight, building a 25-point halftime lead and beating Miami,

Michael Porter Jr. scored 17 points, JaMychal Green added 15 and Jamal Murray had 14 for Denver. The Nuggets are 4-0 on a five-game trip — the first time they Nuggets have won four games on a trip of any length since December 2013.

Taurean Prince added 16 points and rookie Isaac Okoro had 10 points and a season-high six assists to help the Cavaliers snap a two-game losing streak and improve to 9-9.

Jerami Grant scored 26 points and Mason Plumlee had 15 points, 12 rebounds and a career-high eight turnovers for Detroit. The Pistons are 1-7 on the road.

The Bucks (11-6) were leading by just three points after a dunk by DeVincenzo, who followed with a steal and drew a flagrant foul on Kyle Lowry. After DeVincenzo made the two free throws, the Bucks took the ball out of bounds and Bryn Forbes made a 3-pointer for a 92-84 lead with 9:54 left.

Norman Powell led the Raptors with 26 points. Lowry had 21 points and six rebounds.

Kevin Durant scored 32 points and James Harden had 31 to lead a productive night for Brooklyn’s big three scorers and the Nets beat Atlanta in overtime.

Trae Young had 28 points and 14 assists for Atlanta. Cam Reddish scored a season-high 24 points while John Collins and De’Andre Hunter each had 21 points.

Questionable coming into the game with a bruised knee, Sabonis started and finished 9 of 10 from the field. Malcom Brogdon had 25 points, and Justin Holiday added 19.

Terry Rozier had 20 points for the Hornet. They have dropped six of seven.

Sacramento was playing for the first time since Friday after two games were canceled because of COVID-19 protocols with the Memphis Grizzlies. Richaun Holmes added 20 points and 12 rebounds.