Tobias Harris swished a jumper with 3 seconds left, ending the Lakers’ 13-0 run and sending the Philadelphia 76ers to a 107-106 victory over Los Angeles on Wednesday night. 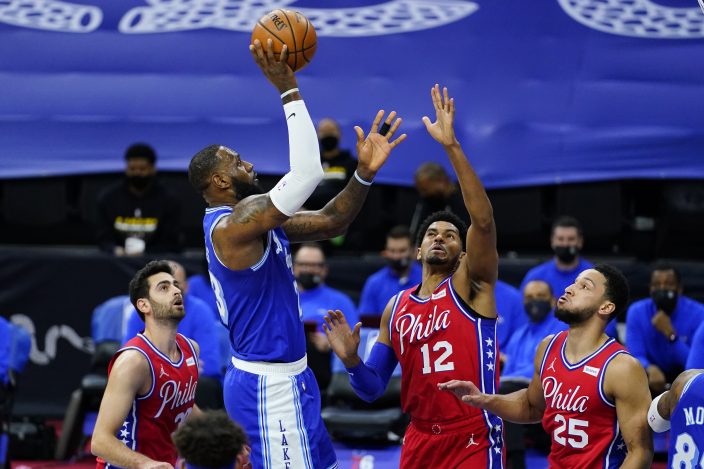 Los Angeles Lakers' LeBron James, second from left, goes up for a shot against Philadelphia 76ers' Furkan Korkmaz, from left, Tobias Harris and Ben Simmons during the first half of an NBA basketball game, Wednesday, Jan. 27, 2021, in Philadelphia. (AP PhotoMatt Slocum)

James scored 34 points and Davis had 23.

Embiid appeared to have hurt his back when he was knocked down by James.

Embiid, the All-Star center off to the best start of his career, drove down the baseline for an attempted right-handed dunk when James pushed him in flight. Embiid crashed hard on his tailbone, immediately grabbed his back and writhed on the court in pain as James simply looked down and walked past him. After a short video review, James was hit with a flagrant 1 -- “unnecessary contact committed by a player against an opponent” -- and Embiid sank both free throws. 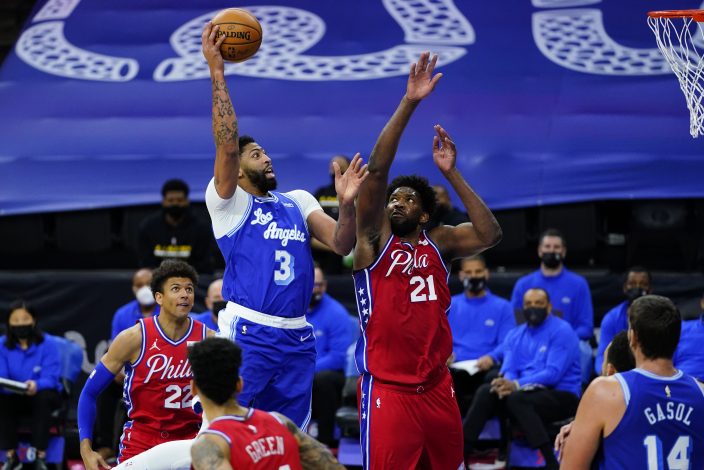 Los Angeles Lakers' Anthony Davis (3) goes up for a shot against Philadelphia 76ers' Joel Embiid (21) during the first half of an NBA basketball game, Wednesday, Jan. 27, 2021, in Philadelphia. (AP PhotoMatt Slocum)

Embiid was quickly hit with his own flagrant when his elbow connected with Davis’ face on a drive to bucket.

Embiid has a history of back issues and sat out Monday’s loss at Detroit with back tightness. He sat alone on a cool-down seat behind the basket for nearly the first 5 minutes of the fourth quarter. Embiid returned and threw his hands in the air in celebration when he buried a shot that gave the Sixers a 10-point lead.

The James-Embiid flagrant took center stage in a game between teams that entered with the best records in their conference. The 76ers lead the East at 13-6 and the Lakers are 14-5 in the West. 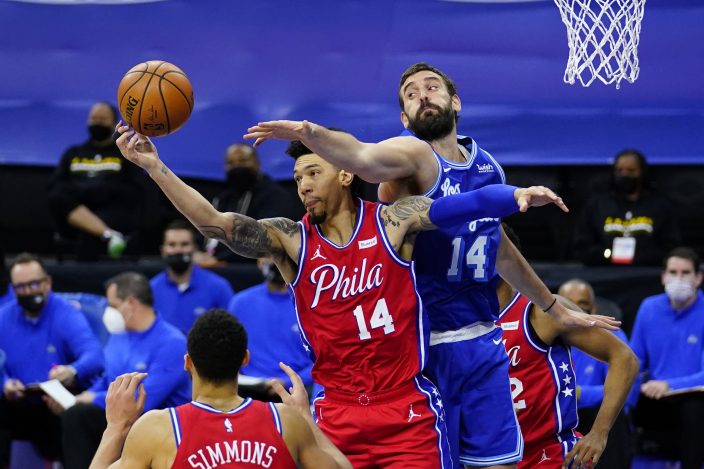 The Lakers suffered their first road loss of the season in 11 games.

Embiid went straight up and blocked James in the first quarter and Danny Green buried a 3 in transition for a 34-18 lead that put the Sixers in control. 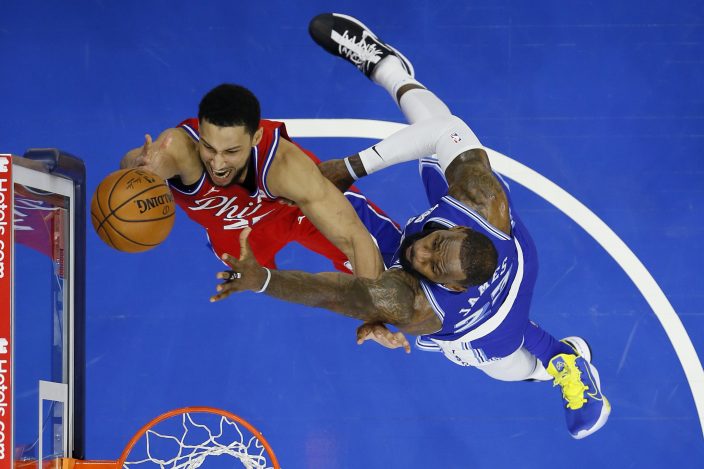 Philadelphia 76ers' Ben Simmons, left, goes up for a shot past Los Angeles Lakers' LeBron James during the first half of an NBA basketball game, Wednesday, Jan. 27, 2021, in Philadelphia. (AP PhotoMatt Slocum)

The Lakers played in Philadelphia for the first time since Jan. 25, 2020, when James passed Kobe Bryant for third place on the NBA’s career scoring list. Bryant, his daughter Gianna and seven other people were killed the next morning in a helicopter crash.

James received a rousing standing ovation when he scored the milestone basket and Bryant tweeted his congratulations in his last public statement.

A year and a day after Bryant’s death, the Lakers played for the first time since the grim anniversary and bowed their heads during a brief video tribute and a moment of silence for Bryant. Bryant went to Lower Merion High School, in an affluent suburb of Ardmore about 20 minutes west of downtown Philadelphia, and he long had a strained relationship with Philly basketball fans. That connection softened in Bryant’s final seasons and chants of “Kobe! Kobe! Kobe!” filled the Wells Fargo Center in his final game in Philly in December 2015.

Philadelphia 76ers' Dwight Howard watches his shot go in the basket during the first half of an NBA basketball game against the Los Angeles Lakers, Wednesday, Jan. 27, 2021, in Philadelphia. (AP PhotoMatt Slocum)

Embiid was a teen in Africa when he first got hooked on basketball watching Bryant and scored 24 points in a one-night-only No. 24 jersey last season in the 76ers’ first game after the crash.

His wore sneakers Wednesday emblazoned with photos of Kobe and Gianna on one side and the 2, 8, 24 uniform numbers on the other.

Lakers: Coach Frank Vogel was a diehard 76ers fan growing up in New Jersey and eventually spent one season as an assistant coach in the 2004-05 season. His trips to Philly are usually a big homecoming but the pandemic sidelined those plans. Vogel said he hasn’t seen his parents since he had dinner with them during the Lakers' last visit to Philly. He said the 76ers’ 1983 NBA championship and the Charles Barkley-Allen Iverson years “were a big part of my upbringing.”

76ers: Simmons moved into 13th on the NBA’s career triple-double list with 31.