With a coronavirus-enforced quarantine coming to an end, the world’s elite tennis players will go from two of the quietest weeks of their lives in Australia to three of the busiest.

The government-mandated quarantine ahead of the Feb. 8-21 Australian Open had a controversial start.

Some players complained bitterly after being forced into hard lockdown because passengers on their charter flights to Melbourne tested positive for COVID-19, and a letter from top-ranked Novak Djokovic to tournament officials offering his suggested rule changes sparked public backlash. The 14-day period of isolation for most players was scheduled to end from late Thursday and early Friday local time. 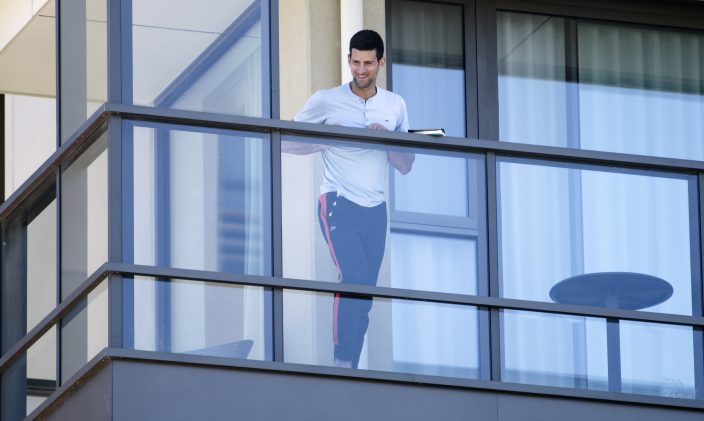 And with it came some plaudits from Serena Williams and Rafael Nadal.

“It’s super, super strict . . . insane and super intense, but they are doing it right,” Williams said of the quarantine in an interview with The Late Show’s Stephen Colbert. “It’s definitely hard with a three-year old (her daughter Olympia), but it’s worth it because you want everyone to be safe.”

The No. 2-ranked Nadal told CNN that international tennis players needed to maintain a “wider perspective on what’s going on in the world,” although he sympathized with the 72 players who were deemed to be close contacts of positive coronavirus cases from three charter flights and who had to stay in their rooms for 24 hours a day and could not practice. 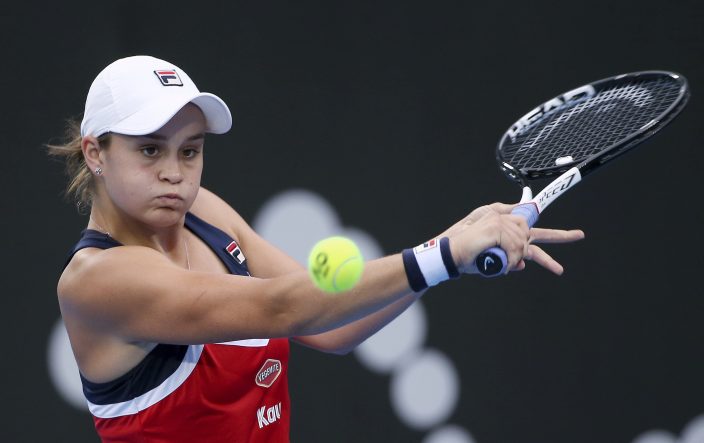 FILE - In this Jan. 10, 2019, file photo, Ash Barty of Australia hits a backhand to Elise Mertens of Belgium during their women's singles match at the Sydney International tennis tournament in Sydney. The world No. 1-ranked Barty on Thursday, Jan. 21, 2021, said she'll play in a one-day exhibition event in Adelaide on Jan. 29 which includes Serena Williams, Naomi Osaka and Simona Halep. (AP PhotoRick Rycroft, File)

“When we came here we knew the measures were going to be strict,” Nadal said. “We knew the country is doing great with the pandemic. Australia is probably one of the best examples in the world ... how they react through very challenging times.”

Indeed, Australia has done well. Due to strict incoming traveler quarantines, limited movement between states and a previous hard lockdown of more than 4 million people in Melbourne when a second wave got out of control in Victoria state, Australia has had only 909 deaths attributed to COVID-19. And 820 of them were in Victoria — most during that second deadly wave when overnight curfews were put in place and use of masks made compulsory outside of home.

There was some considerable doubt during that second wave whether the Australian Open would even be remotely possible in Melbourne. 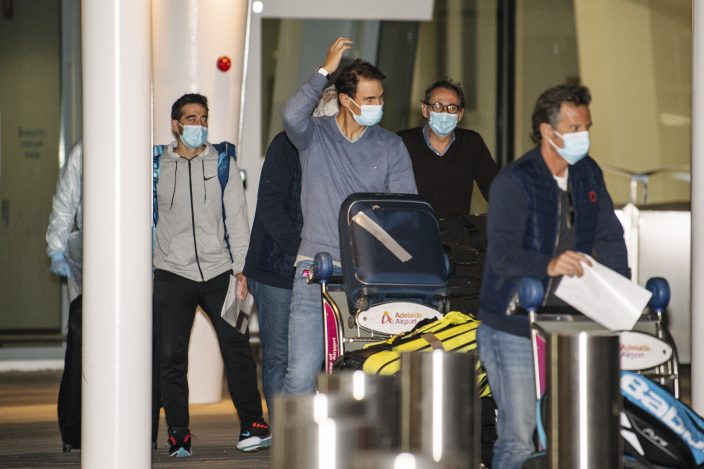 Spain's Rafael Nadal, center, arrives at Adelaide Airport ahead of the Australian Open tennis championship, Adelaide, Australia, Thursday, Jan. 14, 2021. Arriving players will serve a 14-day quarantine period ahead of the first Grand slam tennis tournament that is set to get underway on February 8 in Melbourne. (Morgan SetteAAP Image via AP)

It was the only Grand Slam tournament not affected by coronavirus shutdowns last year, but only because it was held in January before the virus was declared a global pandemic in March. Among the other Grand Slam events, the French Open was delayed until late September, Wimbledon wasn't held at all and the U.S. Open instituted a bio-secure bubble for all players.

This year’s Australian Open was delayed by three weeks to allow arriving players to spend those 14 days in quarantine. Players, coaches and officials were flown in on 17 jets chartered by Tennis Australia and met by biosecurity officials and placed immediately into hotel quarantine. Most players — those not on the three virus-affected charters — were allowed outside for five hours of practice daily.

And instead of having two or three weeks of warmup events, those tournaments have all been compressed into one week beginning Sunday -- the ATP Cup men’s team event, two other ATP tournaments and three WTA events. 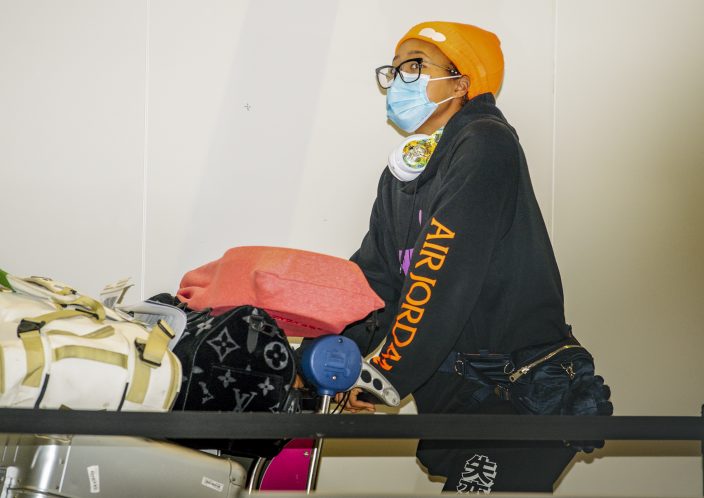 Japan's Naomi Osaka arrives at Adelaide Airport ahead of the Australian Open tennis championship, Adelaide, Australia, Thursday, Jan. 14, 2021. Arriving players will serve a 14-day quarantine period ahead of the first Grand slam tennis tournament that is set to get underway on February 8 in Melbourne. (Morgan SetteAAP Image via AP)

One of the WTA events is only open to players who were among those 72 forced into hard lockdown and who couldn’t take advantage of the daily practice allocation. They include 2019 U.S. Open champion Bianca Andreescu, whose coach was among those who tested positive, and two-time Australian Open champion Victoria Azarenka.

Before the official tournaments begin, eight of the world’s top players will take part in an Adelaide exhibition on Friday. Djokovic will play Jannik Sinner and Williams will take on Naomi Osaka in the day session. Nadal will play U.S. Open champion Dominic Thiem and No. 1-ranked Ash Barty plays Simona Halep in the night session.

It will be Barty’s first tournament in 11 months. She decided not to defend her 2019 French Open title at the delayed event in Paris, and travel restrictions for Australian citizens attempting to leave the country made it difficult to travel anyway. 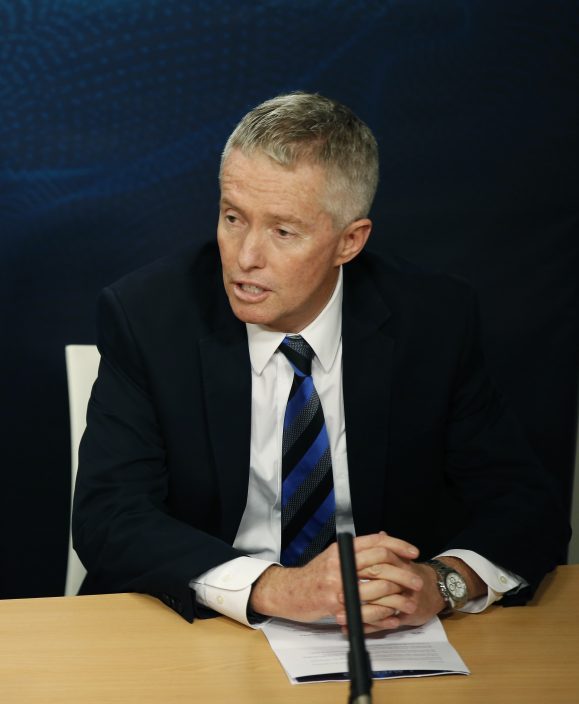 FILE - In this Jan. 29, 2016 file photo, Tennis Australia CEO and Australian Open Tournament Director, Craig Tiley answers questions at a press conference at the Australian Open tennis championships in Melbourne, Australia. Tiley said Jan. 19, 2021, that he has ruled out any change in the best-of-five format for men's play at the Australian Open as three more COVID-19 cases were reported among the international arrivals for the tournament beginning Feb. 8.(AP PhotoVincent Thian,File) 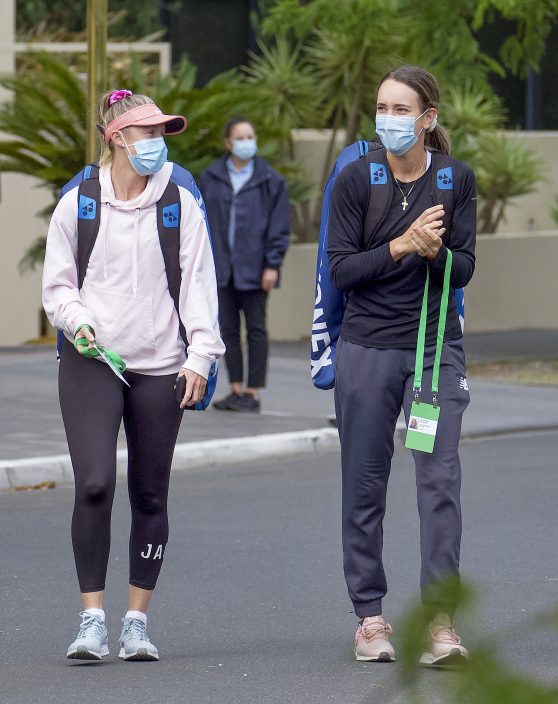 Unknown tennis players are escorted to their training session in Melbourne, Australia, Monday, Jan. 18, 2021.The number of players in hard quarantine swelled to 72 ahead of the Australian Open after a fifth positive coronavirus test was returned from the charter flights bringing players, coaches, officials and media to Melbourne for the season-opening tennis major. (Luis AscuiAAP Image via AP) 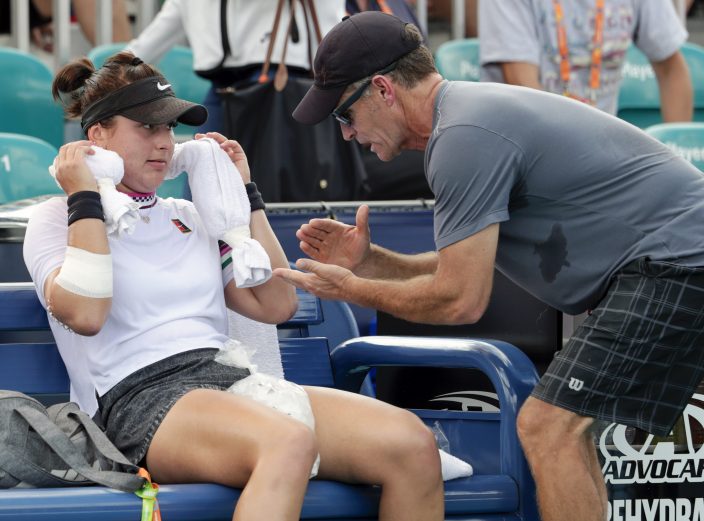 FILE - In this March 21, 2019 file photo, Bianca Andreescu, of Canada, left, talks with her coach Sylvain Bruneau during her match against Irina Camelia Begu, of Romania, at the Miami Open tennis tournament in Miami Gardens, Fla. Bruneau has released a statement, Sunday, Jan. 17, 2021, saying he was the positive coronavirus case aboard the flight from Abu Dhabi to Melbourne and he had followed all protocols and procedures, including producing a negative test within 72 hours before the flight departure and has "no idea how I might have contracted the virus." (AP PhotoLynne Sladky, File)