The stage has been set for one of the great comebacks in one of sport’s oldest events when American Magic races Luna Rossa in the semifinals of the America’s Cup challenger series.

Only 11 days ago American Magic’s racing yacht Patriot was holed and came close to sinking after capsizing during a round-robin race against Luna Rossa. The U.S. team’s shore crew has worked feverishly since the accident to restore Patriot to racing trim; repairing the damaged hull, stripping out and replacing its electronic systems and restoring the hydraulics.

In what many observers see as a phenomenal feat of restorative boat building, Patriot was sailing again on Wednesday, had passed scrutiny of the measurement committee and was cleared to line up at the start on Friday. 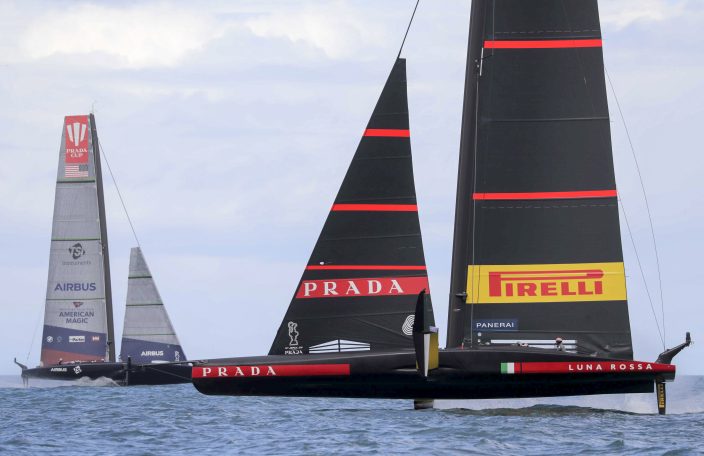 The winner of the best-of-seven race series between the U.S. and Italian teams will face Britain’s INEOS Team UK in the challenger series final for the Prada Cup. The loser goes home.

The evidence of the round-robin series is that the American Magic and Luna Rossa yachts are closely matched, perhaps with an advantage to the U.S. boat in the higher wind range. The question that may be answered in the first semifinal race on Friday is whether Patriot is in the same racing condition as it was before the capsize.

Teams involved in America’s Cup campaigns aim to make incremental improvements in the performance of their race boats as the event proceeds, usually over a period of months. Patriot’s dramatic capsize might not just have threatened to end its involvement in the challenger series but may have forced the U.S. team to defer any planned improvements.

It was also a traumatic experience for the crew, some of whom briefly were trapped under the giant mainsail when the 75-foot yacht tipped over on its port side. The semifinals races will also reveal whether the accident has dented the U.S. team’s confidence in the boat or themselves.

“We had a pretty good setback,” American Magic skipper Terry Hutchinson said. “By the measure is always going to be how we respond to it. We can’t dwell on the past; the only thing that we can control is our future.”

The effort that saved Patriot from sinking and which enabled it to race again was not just a team one but a community one. Rival teams rushed to help American Magic when the boat capsized and it was a joint and lengthy effort on the water that day and night that saw Patriot pumped out and towed back to its base.

America’s Cup defender Team New Zealand also has been instrumental in the repair work, making its boat builders available to American Magic and helping fashion the panel which has been inserted in place of the gashed section of the bow.

The America’s Cup has hardly been noted in its 170-year history as the last, best hope for sportsmanship. The event which attracted and often ensnared some of the richest people on the planet has been famous for the rancorous nature of competition on the water and in the courtroom.

But when American Magic was in danger of being prematurely lost to the regatta, its rivals rushed to its assistance and have been unstinting in their support.

“A massive thank you to all the guys who helped,” American Magic mainsail trimmer Paul Goodison told the New Zealand Herald. “We were out there on the water and were within inches of the boat going down. To see ... other teams come and jump on board to try and help us to save the yacht, it felt really special.

“And then since returning to shore, the support we’ve received all week from the local community … we’re lucky to have received all that support. We’ve just got to get out there and go racing again.”

Grinder Sean Clarkson, a veteran of eight America’s Cup campaigns, is confident the U.S. team is ready to return to racing.

“We’ve just got to back ourselves, trust ourselves and do what we would’ve done normally,” Clarkson said. “We’ve got a great boat, a great crew. We've just got to do it.

“We’re very fortunate, very grateful to the shore crew, the design team and the general public. They’re behind us and they got us here.”