“I think we need to push ourselves,” Miller said. “I know it looks pretty for you guys because I got some points today but at the same time there’s not much difference in the game.”

Elias Pettersson also had a goal and an assist, and Thatcher Demko made 42 saves for Vancouver. 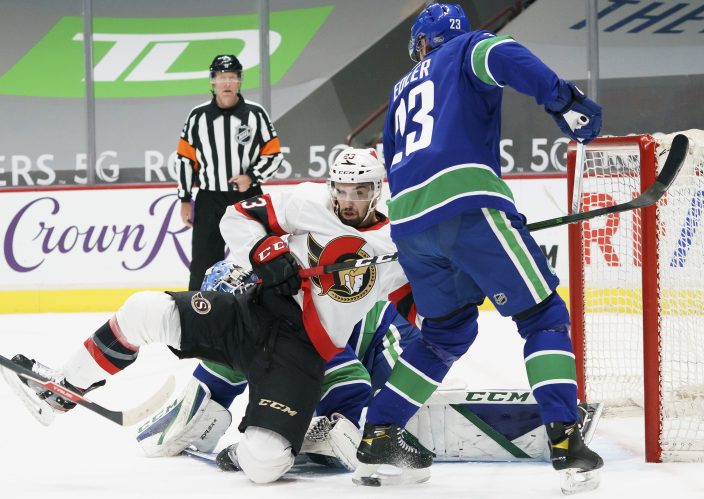 “There’s always pressure and I’m the guy that puts the most pressure on me,” Pettersson said. “I always want to play good and I’ll be honest, my first couple of games haven’t been the way I want to play. Today was definitely a step in the right direction, but me and our line, definitely have a lot more to give.”

The Canucks sealed it 11:46 into the third period after Jay Beagle collected the puck from a messy faceoff. He sent it careening to the front of the net, where it deflected in off Motte.

Motte has five goals, surpassing the four he scored for Vancouver in 34 regular-season appearances in 2019-20.

Demko was tested early and often, with one of his best saves of the night coming midway through the first period when he stood down Tkachuk on a breakaway.

The Vancouver goalie faced a flurry of action on Ottawa’s first power play, with the Canucks’ penalty killers struggling to clear the puck from around the crease. Norris took advantage of the commotion and buried a wrist shot 8:16 into the period, tying the game at 1-1.

Defenseman Jalen Chatfield slotted back into Vancouver’s lineup after missing two games with an upper-body injury. ... Earlier Wednesday, the Sens dealt defenseman Christian Jaros to the San Jose Sharks for forward Jack Kopacka and a seventh-round pick in the 2022 entry draft.

Ottawa won’t have to wait long for a chance to avenge Wednesday’s loss. The two sides will battle again on Thursday, closing out a three-game series.