The United States says it has directly “pressed senior levels” of Eritrea’s government to immediately withdraw its troops from neighboring Ethiopia, where witnesses have described them looting and hunting down civilians in the embattled Tigray region.

A State Department spokesperson in an email to The Associated Press on Thursday said Washington has conveyed “grave” concerns about credible reports of abuses. There were no details on how officials with Eritrea, one of the world’s most secretive countries, responded.

Eritrea has said little publicly about the conflict in Tigray as Ethiopian soldiers fight forces loyal to the now-fugitive Tigray regional leaders who once dominated Ethiopia’s government for nearly three decades. The Tigray leaders were marginalized after Prime Minister Abiy Ahmed took office in 2018, and each side regards the other as illegitimate. 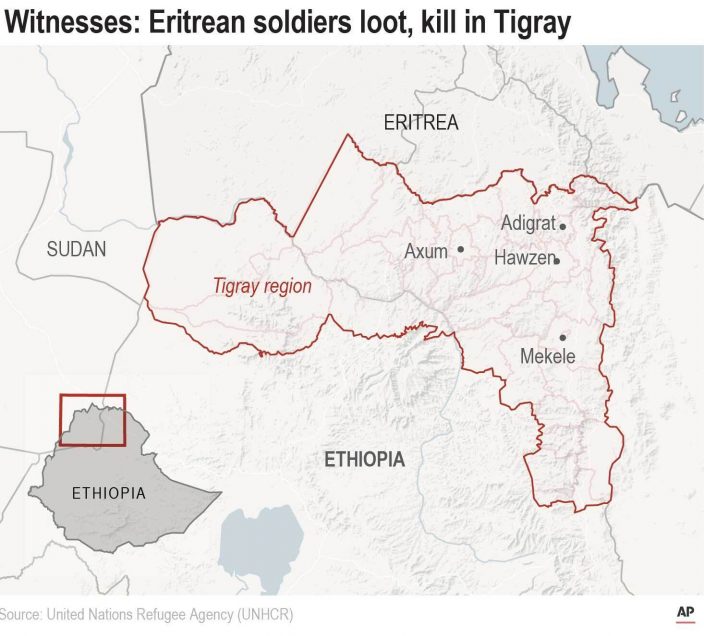 Ethiopia has repeatedly denied the presence of Eritrean soldiers, who some witnesses have estimated in the thousands. Now concerns are growing that the Eritrean forces refuse to leave. Eritrea remains an enemy of the fugitive Tigray leaders after a two-decade border war that ended under Abiy.

Eritrea’s information ministry on Thursday published a statement by the country’s embassy in the U.S. responding to an open letter this week by former U.S. ambassadors to Ethiopia that expressed concern about the Tigray conflict and Eritrea’s involvement.

“The allusion by these ambassadors to potential territorial war between Eritrea and Ethiopia can only be disingenuous in content and vicious in intent,” Eritrea's statement said, expressing “profound dismay at their provocative and ill-intentioned swipe.”

The Tigray region remains largely cut off from the outside world and Ethiopia has blocked almost all journalists from entering, complicating efforts to verify assertions by the warring sides.

Meanwhile, humanitarian workers have had limited access to the estimated 6 million people in Tigray as food and other supplies run short and concerns about starvation grow.

The situation is “deteriorating every day, every minute,” the president of the Ethiopian Red Cross Society, Ato Abera Tola, told reporters on Thursday as Red Cross entities appealed for more financial support. “There is no area which is not affected by this conflict ... the conflict is everywhere.”

The Ethiopia head of delegation for the International Committee for the Red Cross, Katia Sorin, said they still had not been able to reach rural areas of Tigray, a largely agricultural region. The ICRC is one of the few international organizations to maintain its operations in Tigray after fighting began.

“We’re helping, but it’s a drop in the ocean of need,” Sorin said.