Republican Senate leader Mitch McConnell has praised embattled No. 3 House Republican Liz Cheney as “a leader with deep convictions and courage,” even as he's criticized the “looney lies” of a hard-right House GOP freshman as a “cancer” on the party.

Scores of conservative House Republicans are seeking to oust Cheney, R-Wyoming, from her leadership post after she supported the chamber’s impeachment of then-President Donald Trump.

And Democrats are pushing to remove freshman Rep. Marjorie Taylor Greene, R-Ga., from her committee assignments after reports of social media posts backing baseless assertions that some mass shootings at schools were staged. She's also encouraged violence against Democratic politicians. 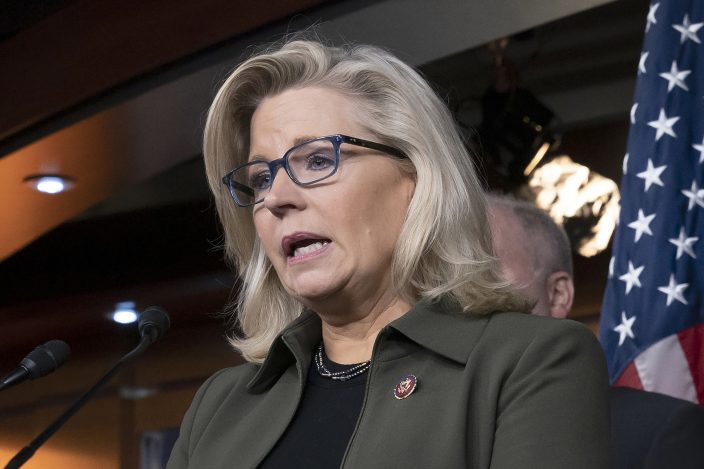 FILE - In this Dec. 17, 2019 file photo, Rep. Liz Cheney, R-Wyo., speaks with reporters at the Capitol in Washington. A deepening divide among Republicans over President Donald Trump's efforts to overturn the election runs prominently through Wyoming, the state that delivered Trump's widest prevailing margin by far. Eleven Republican senators saying they will not be voting Wednesday, Jan. 6, 2021, to confirm President-elect Joe Biden's victory include Wyoming's newly sworn in Sen. Cynthia Lummis, a Cheyenne-area rancher and former congresswoman. Vocal opponents of any such move include Wyoming Rep. Liz Cheney, leader of GOP messaging in the House as its third-ranking Republican (AP PhotoJ. Scott Applewhite, File)

It is unusual for the guarded McConnell, R-Ky., to publicly weigh in on political turmoil in the House. His comments suggest concerns about letting the GOP's most pro-Trump, hardest-right factions gain too much sway in the party.

McConnell has all but broken with Trump following the deadly Jan. 6 attack on the Capitol that led to five deaths. The Kentuckian is also still haunted by winnable Senate races that Republicans lost after nominating fringe candidates who lost their general elections.

McConnell's strong words could put pressure on House Minority Leader Kevin McCarthy, R-Calif., who runs the fractious House GOP conference and will be influential in deciding how to handle Cheney and Greene. McCarthy has been more cautious in his dealings with both lawmakers. 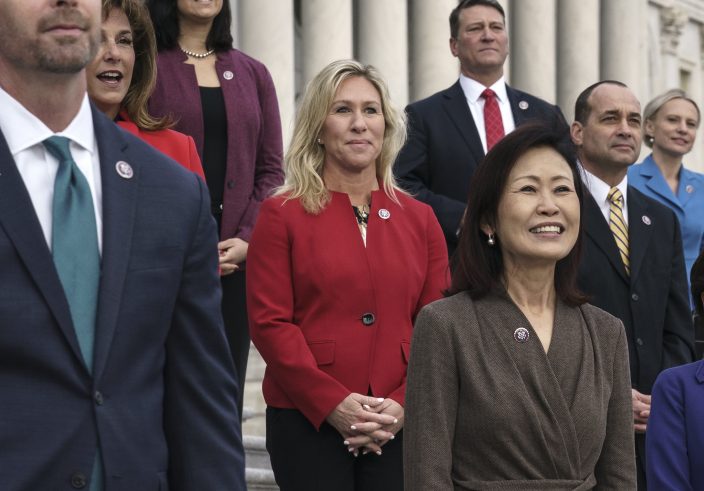 In this Jan. 4, 2021, photo, Rep. Marjorie Taylor Greene, R-Ga., center, stands with other GOP freshmen during an event at the Capitol in Washington. Republican Senate leader Mitch McConnell is calling the far-right Georgia Republican's embrace of conspiracy theories and "loony lies" a "cancer for the Republican Party." House Democrats are mounting an effort to formally rebuke Greene, who has a history of making racist remarks, promoting conspiracy theories and endorsing violence directed at Democrats. (AP PhotoJ. Scott Applewhite)

“Liz Cheney is a leader with deep convictions and the courage to act on them,” McConnell said in a statement obtained Tuesday by The Associated Press.

McConnell did not explicitly call for keeping Cheney, daughter of former Vice President Dick Cheney, in her No. 3 job. But he called her “an important leader in our party and in our nation” and said he looked forward to continuing to work with her.

On Monday, McConnell released a statement that said, “Loony lies and conspiracy theories are cancer for the Republican Party and our country. Somebody who’s suggested that perhaps no airplane hit the Pentagon on 9/11, that horrifying school shootings were pre-staged, and that the Clintons crashed JFK Jr.’s airplane is not living in reality.”