About 200 supporters of Indian farmers scuffled with police on Wednesday after being blocked from marching to an area for protests near the Parliament building in the Indian capital.

Waving flags and banners, the protesters demanded the repeal of new agriculture reform laws which the farmers say will favor large corporations.

The police barricaded the road and some protesters tried to push their way through, but were blocked by a heavy police presence. 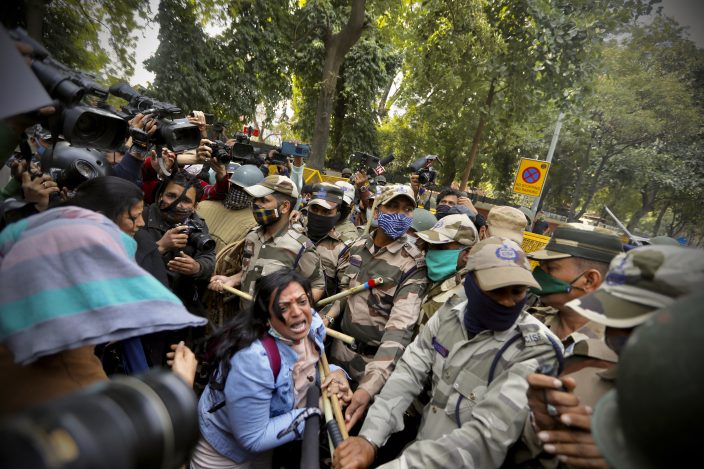 A woman faces security officer during a protest held to show support to farmers who have been on a months-long protest, in New Delhi, India, Wednesday, Feb. 3, 2021. Nearly 200 supporters of Indian farmers on Wednesday clashed with the police who blocked them from marching to an area for protests close to Parliament in the Indian capital. Waving flags and banners representing their organizations, the protesters demanded the repeal of new agriculture reform laws which the farmers say will favor large corporate farms. (AP PhotoManish Swarup)

The protesters represented the opposition Congress party and groups including the All India Central Council of Trade Unions, the All India Students’ Association and the Students’ Federation of India.

Tens of thousands of farmers have been camping on the outskirts of New Delhi for more than two months in an effort to force the repeal of laws they believe would end government-set prices and force them to sell to powerful corporations rather than government-run markets.

The deadlock turned violent on Jan. 26, India’s Republic Day, when tens of thousands of farmers riding tractors stormed India’s historic Red Fort and unfurled the flag of the minority Sikh community, which is leading the protest. Clashes between the protesters and government forces left one protester dead and nearly 400 police officers injured.

Prime Minister Narendra Modi's government has offered to suspend the laws for 18 months but farmers are insisting they be repealed.

Rihanna said in a tweet, “Why aren’t we talking about this?! #FarmersProtest.”

"We stand in solidarity with the #FarmersProtest in India,” Thunberg tweeted.

"The temptation of sensationalist social media hashtags and comments, especially when resorted to by celebrities and others, is neither accurate nor responsible,” the ministry said in a statement.

1 tweet from Rihanna on farmer protests gets India incensed