It took just one tweet from Rihanna to anger the Indian government and supporters of Prime Minister Narendra Modi's party. The pop star linked a news article in a tweet drawing attention to the massive farmer protests that have gripped India for more than two months.

Now, senior government ministers, Indian celebrities and even the foreign ministry are urging people to come together and denounce outsiders who try to break the country.

“It is unfortunate to see vested interest groups trying to enforce their agenda on these protests, and derail them,” India's foreign ministry said in a rare statement Wednesday, without naming Rihanna and others who followed her suit. 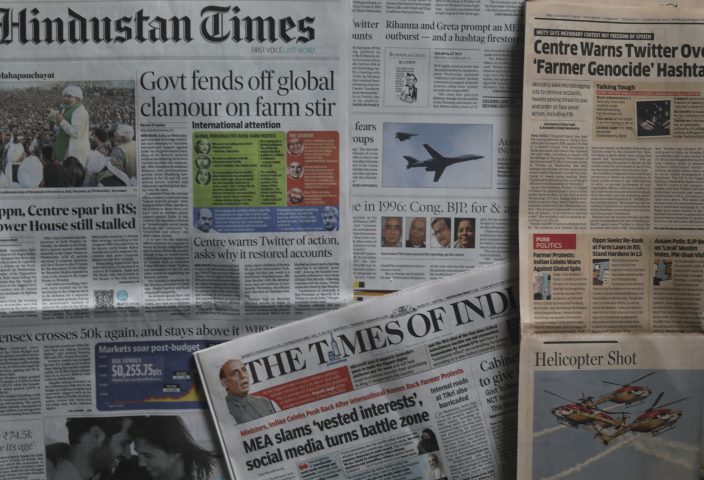 Indian newspapers carry news of people from India and outside tweeting about the farmer protests in New Delhi, India, Thursday, Feb. 4, 2021. It took just one tweet from pop star Rihanna to anger the Indian government and supporters of Prime Minister Narendra Modi's party, after she tweeted about the farmer protests that have gripped India. Now, senior Indian ministers, Bollywood celebrities, sports stars, journalists close to Modi's party and a rare statement by India’s foreign ministry urging Indians to unite and denounce voices from outside India who try to break the country. (AP PhotoManish Swarup)

Tens of thousands of farmers have been hunkering down at the Indian capital’s fringes to protest new agricultural laws they say will leave them poorer and at the mercy of corporations. The protests are posing a major challenge to Modi who has billed the laws as necessary to modernize Indian farming.

Their largely peaceful protests turned violent on Jan. 26, India’s Republic Day, when a section of the tens of thousands of farmers riding tractors veered from the protest route earlier decided with police and stormed the 17th century Red Fort in a dramatic escalation. Hundreds of police officers were injured and a protester died. Scores of farmers were also injured but officials have not given their numbers.

Farmer leaders condemned the violence but said they would not call off the protest.

Since then, authorities have heavily increased security at protest sites outside New Delhi’s border, adding iron spikes and steel barricades to stop demonstrating farmers from entering the capital. The government had also restricted access to mobile internet at protest sites up until Tuesday evening.

The latest controversy started Tuesday when Rihanna tweeted to her more than 101 million Twitter followers: “Why aren’t we talking about this?!” She linked to a CNN news report about India blocking internet services at the protest sites, a favored tactic of the Modi government to thwart protests.

Then India’s foreign ministry accused “foreign individuals” and celebrities of “sensationalism.” The ministry's statement did not, however, name Rihanna.

Teenage climate activist Greta Thunberg and the niece of U.S. Vice President Kamala Harris, Meena Harris, were among others who then tweeted their support, and a social media storm soon followed.

Bollywood entertainers and sports stars, many of whom have long been silent on the farmer protests and are known to toe the government's line, tweeted in one voice.

They used hashtags #IndiaAgainstPropaganda and #IndiaTogether, echoing the government’s stand on the agriculture laws and asked people outside India not to meddle with their country’s affairs.

“No one is talking about it because they are not farmers, they are terrorists who are trying to divide India,” she wrote.

Negotiations have failed, with the government proposing changes but not meeting the farmers' demands for a full repeal.