South Africa is considering giving a COVID-19 vaccine that is still in the testing phase to health workers, after suspending the rollout of another shot that preliminary data indicated is not effective at preventing mild to moderate illness from the variant dominant in the country.

The country is scrambling to come up with a new vaccination strategy after it halted use of the AstraZeneca vaccine — which is cheaper and easier to handle than others and which many had hoped would be crucial to combatting the pandemic in developing countries. Among the possibilities being considered: mixing the AstraZeneca vaccine with another one and giving Johnson & Johnson's single-dose vaccine, which has not yet been authorized for use anywhere, to 100,000 health care workers while monitoring its efficacy against the variant.

South Africa’s inoculation strategy is being watched globally because the variant first detected and now dominant here is spreading in more than 30 countries. Officials say this form of the virus is more contagious, and evidence is emerging that it may be more virulent; recent studies have also shown it can infect people who have survived the original form of the virus. 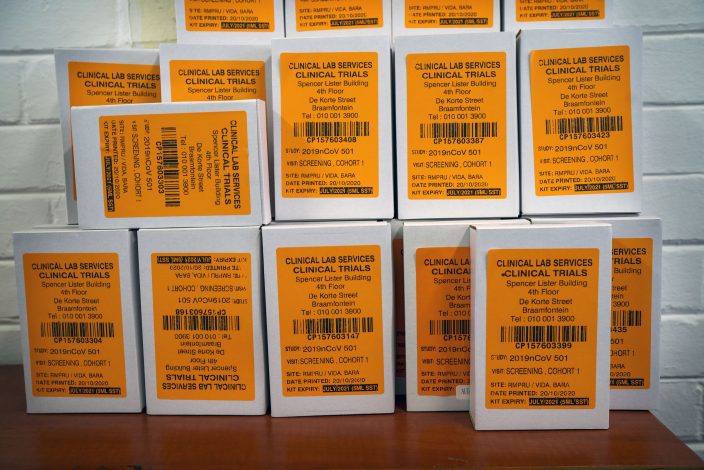 Clinical trials test vaccine are stored at the University of Witwatersrand' Soweto's Chris Sani Baragwanath Hospital facility outside Johannesburg, Monday, Nov. 30, 2020. South Africa is scrambling to come up with a new vaccination strategy to combat COVID-19 following its suspension of the rollout of the AstraZeneca vaccine, after a preliminary test showed weak results in protecting the variant dominant in this country. Among the possibilities being considered are giving one dose of AstraZeneca in the hopes it will protect against severe disease and death from the variant. (AP PhotoJerome Delay)

After a second surge, cases and deaths in South Africa have begun to fall recently, but it is still battling one of Africa’s most severe outbreaks, with more than 46,000 deaths. It is worried that another spike will come in May or June, when the Southern Hemisphere country heads into its winter.

So far, early results from trials of the Johnson & Johnson vaccine showed it offers less protection against the variant than the original disease but is still highly effective at preventing severe and fatal cases, according to Dr. Glenda Gray, director of the South Africa Medical Research Council, who led the South African part of the global trial. A Novavax vaccine candidate has shown similar results.

“We can’t wait. We already have good local data,” Gray said, stressing that clinical trials show that it is safe. She added that South Africa is making urgent plans to “roll it out and evaluate it in the field.” 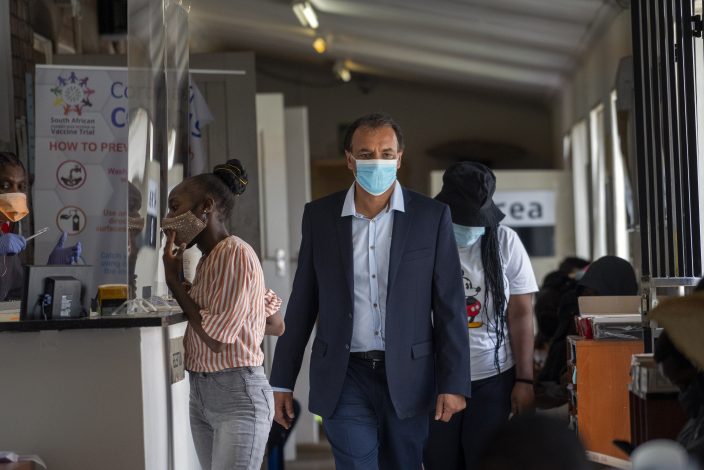 FILE- In this Nov. 30, 2020 file photo, Shabir Madhi, Professor of Vaccinology at the University of Witwatersrand, walks through a COVID-19 vaccine trial facility set at Soweto's Chris Sani Baragwanath Hospital outside Johannesburg. South Africa is scrambling to come up with a new vaccination strategy to combat COVID-19 following its suspension of the rollout of the AstraZeneca vaccine, after a preliminary test showed weak results in protecting the variant dominant in this country. Among the possibilities being considered are giving one dose of AstraZeneca in the hopes it will protect against severe disease and death from the variant. (AP PhotoJerome Delay, File)

“Our scientists must get together and quickly figure out what approach we’re going to use,” Health Minister Zweli Mhkize said Sunday night, announcing the suspension of the use of the AstraZeneca vaccine, which is currently the only one available in South Africa. Deliveries of others, including the one made by Pfizer and BioNTech, are expected soon.

The suspension threw South Africa's vaccination plans into disarray just one week after the country received its first 1 million doses of the vaccine. It came after the early results of a small clinical trial showed that the shot did not prevent mild to moderate cases of COVID-19 in young adults, according to an announcement by the University of Witwatersrand, which conducted the test.

The AstraZeneca study involved 2,000 healthy volunteers with an average age of 31 and showed just 22% were protected against mild to moderate cases of the disease.

Experts say the vaccine may still prevent against severe disease — and that would go a long way in slowing the pandemic and avoiding hospitals from becoming overwhelmed with patients.

“Vaccines that are effective against the more severe forms of disease may not affect milder forms, so there is optimism that severe disease will still be prevented by vaccines,” said Peter Openshaw, a professor of experimental medicine at Imperial College London.

But the results were disappointing enough that South African officials decided to postpone the rollout of the vaccine, which was supposed to be given to front-line healthcare workers starting in mid-February.

The preliminary study has not been peer-reviewed — the gold standard in scientific studies — but was still “a reality check,” said Professor Shabir Madhi, who conducted the trial. “We were euphoric. We must recalibrate our expectations."

Now, the country is looking to switch gears. It may end up continuing with giving at least one dose of AstraZeneca in the hope it will protect against severe disease and death from the variant. It is also considering combining the shot with one from another vaccine. Most of the vaccines being tested require two doses; Johnson & Johnson is an exception.

An experimental study began last week in Britain — the first of its kind worldwide — testing whether doctors could safely mix and match doses of the AstraZeneca vaccine with the shot made by Pfizer and BioNTech.

An added complication is that the AstraZeneca doses in South Africa have an April expiration date, making it difficult to administer two doses within such a short period.

Last week, Sarah Gilbert of Oxford University, who helped develop the AstraZeneca vaccine, said researchers were currently working to tweak their vaccine by inserting a genetic sequence from the new variant.

South African experts have been conducting clinical trials on the effects of the variant, known as B.1.351. That variant quickly became more than 90% dominant here.

The variant has reduced the level of protection offered by virtually all the vaccines, but most vaccines show satisfactory efficacy in protecting against severe cases and death caused by the version, said Madhi. Trials of the Novavax vaccine, for instance, showed diminished but still good protection against the variant, he said.

“It is not all doom and gloom … we do have vaccines that work,” said Madhi.

Still, he added, “This virus is likely to be with us for the course of our lifetimes. It is unlikely that it will be eradicated soon.”