Italy’s main teachers' union is balking at plans for educators under age 55 to receive the AstraZeneca vaccine rather than jabs it believes provide better protection, evidence that lobbying groups are vying to get specific shots as the virus and its variants spread across Europe.

The CISL School union said in a statement Monday that it wanted a meeting with Italy’s government scientific committee. It complained that it hadn’t been consulted about the decision to start up the vaccine drive for teachers ahead of schedule, with some of the first 250,000 AstraZeneca doses that arrived over the weekend.

The Italian government rejiggered its vaccination plans last week after Pfizer-BioNTech and Moderna reduced vaccine deliveries and Italy’s pharmaceutical agency gave “preferential use” for AstraZeneca shots for people aged 18 to 55. The government is now directing its Pfizer and Moderna shots to inoculate people over age 80 while designating the AstraZeneca jabs for younger, at-risk workers. 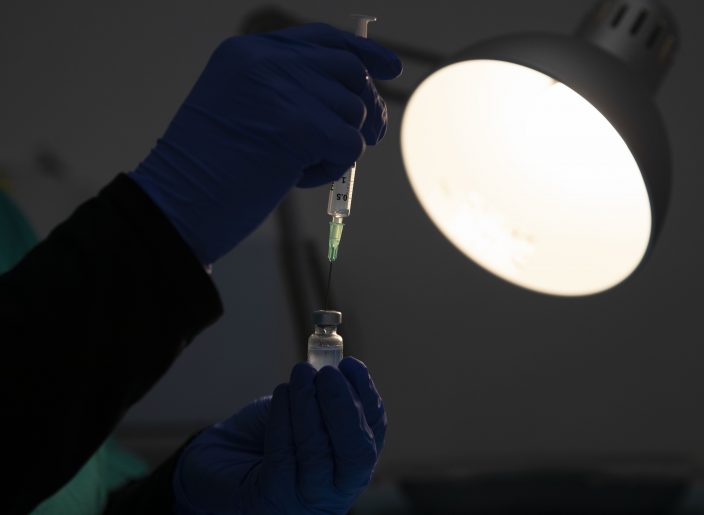 A medical staff member holds a syringe as she prepares a dose of the Pfizer-Biotech vaccine to be administered to over eighty-year-olds, in the Santa Maria della Pieta hospital in Rome, Monday, Feb. 8, 2021. (AP PhotoAlessandra Tarantino)

Over the weekend, South Africa suspended plans to inoculate its front-line health care workers with AstraZeneca after a small clinical trial suggested that it isn’t effective in preventing mild to moderate illness from the variant dominant in the country. 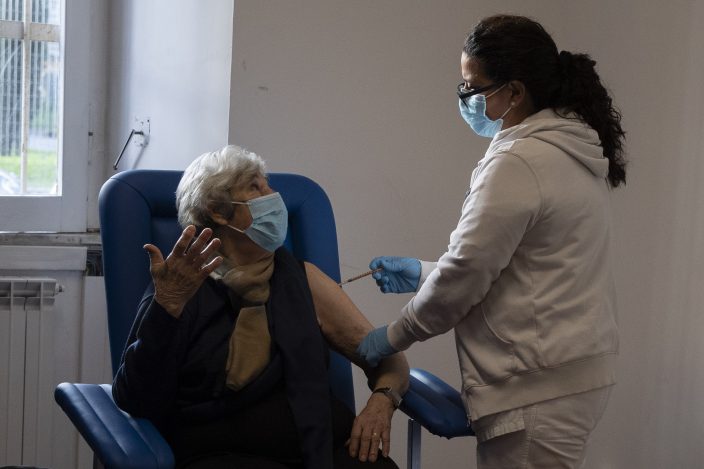 A medical staff member administers a dose of the Pfizer-Biotech vaccine to an over eighty-year-old, in the Santa Maria della Pieta hospital in Rome, Monday, Feb. 8, 2021. (AP PhotoAlessandra Tarantino)

Northern Italy has been the hardest-hit part of the country ever since the first locally transmitted case was confirmed on Feb. 21 in Lombardy and became Europe's one-time epicenter. While infections nationwide have held steady for several weeks — around 8,000 new confirmed cases were reported Monday and 307 new deaths — northern regions continue to see the highest numbers of infections and deaths. With more than 90,000 dead, Italy has the second-highest confirmed COVID-19 death toll in Europe after Britain.

The union said school workers were questioning whether to accept the AstraZeneca vaccine given its “claimed lower vaccination coverage compared to the more effective Pfizer and Moderna vaccines.”

Italy's virus czar, Domenico Arcuri, has defended the decision to direct the AstraZeneca vaccines to younger workers, saying the dual aim of Italy's campaign is to reduce mortality overall among the elderly who are most at risk of fatal complications, and reduce the spread of the virus among younger people.

“We have a new weapon that allows us to amplify the categories to vaccinate," Arcuri told reporters Friday.

But the new “preferential use” designation for AstraZeneca shots means a parallel campaign begins this week for under-55 teachers, law enforcement personnel, armed forces, prisoners and prison officials as well as essential workers and residents of communities.

To date, Italy has administered more than 2.5 million doses. On Monday in Rome, the first doses for people over age 80 and not living in nursing homes got underway at local hospitals.

“I have seven grandchildren waiting for a hug,” a pleased Abramo Abrusca said as he got his Pfizer shot.