Complete with a flexed bicep emoji, Gareth Bale posted a seemingly encouraging fitness update to his 43.7 million followers on Instagram ahead of Tottenham’s final training session before an FA Cup match at Everton. 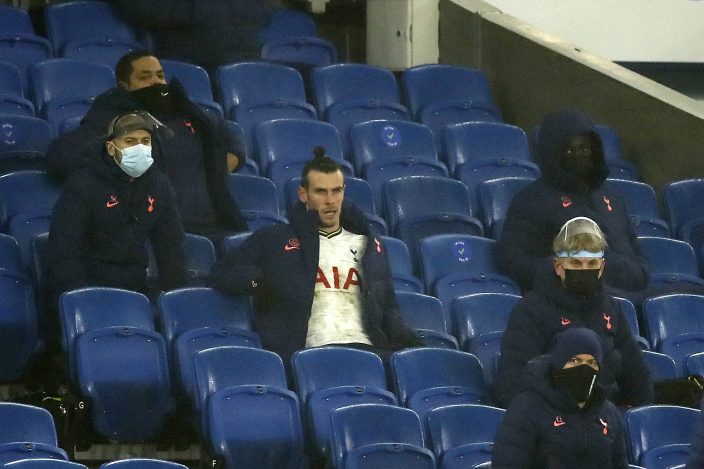 Tottenham's Gareth Bale sits in the stand watching the match after being substituted during an English Premier League soccer match between Brighton and Tottenham Hotspur at the Amex stadium in Brighton, England, Sunday Jan. 31, 2021. (Andrew BoyersPool via AP)

According to Tottenham manager Jose Mourinho, Bale was “not feeling comfortable” with an unspecified injury and informed club officials he wanted to work with the sports science department instead of traveling north to Goodison Park on Wednesday.

“I don’t think it is an obvious injury,” Mourinho said, adding that he was “surprised” by the latest fitness status of a fragile player who it’s increasingly clear he cannot rely on.

So, another setback for Bale. And, frustratingly, another likely lay-off for the Wales international whose second spell at Tottenham just cannot get going. 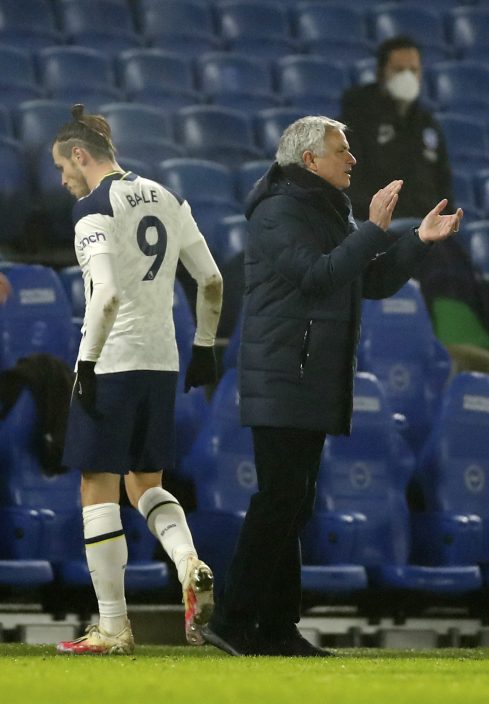 Bale has appeared in only six of Tottenham’s 22 games in the Premier League after securing a season-long loan in September from Real Madrid, where he had become an outcast.

Just two of those have been starts. And he has only completed 90 minutes once in 15 appearances in all competitions, which have mostly been in the Europa League and the domestic cups.

The widely trumpeted homecoming has been a major letdown.

“When I’m watching him now,” Chris Coleman, Bale’s former coach with Wales’ national team, said this week, “it looks like he’s always on his first game back after an injury. Obviously, we expected him to be in the flow of it by now but he clearly isn’t.

“He will very much want to be in the heart of it,” Coleman added, “and if he’s not quite there yet, he’s either not ready physically or maybe mentally there’s a lack of confidence.”

Coleman, who had a strong bond with Bale in the international set-up, said he wasn’t ready to “write him off” just yet. But there’s no denying that the 31-year-old Bale’s career is on a downward trajectory, the forward looking nothing like the player who moved to Madrid for a then-world record fee of 100 million euros (then $132 million) in 2013.

A departure from Madrid was necessary after a breakdown in his relationship with coach Zinedine Zidane, who only used Bale for about 100 minutes in league games after the pandemic shutdown ended in June.

Bale didn’t even travel to Manchester City for the second leg of Madrid’s last-16 matchup with the English team in the Champions League in early August, reportedly because he knew he would not be picked by Zidane for a game City won 2-1 to advance.

With Tottenham playing City in the league on Saturday, it looks like Bale won’t be at Etihad Stadium again. Mourinho probably wouldn’t have selected him against the leaders, anyway.

Even if Steven Bergwijn, Erik Lamela and Lucas Moura have their shortcomings as the third part of the three-man strike force alongside forwards Harry Kane and Son Heung-min, they are currently more reliable picks for Mourinho then Bale.

Since an underwhelming display in a 1-0 loss at Brighton, when he lasted 61 minutes, Bale has been an unused substitute in league matches against Chelsea and West Bromwich Albion. In the 2-0 win over West Brom on Sunday, even 16-year-old forward Dane Scarlett came on ahead of Bale.

Bale’s one league goal since his return remains the headed winner against Brighton on Nov. 1, a moment many thought would kickstart his second spell at Tottenham. It hasn’t.

Bale’s drive was criticized in his final months at Madrid, with some seeing him as a loner who cared more about golf than soccer.

And it was concerns over his motivation that prompted Mourinho to be asked, after the wild 5-4 loss to Everton in the fifth round of the FA Cup, whether Bale simply needed to play through the constant injury issues he has been picking up in recent months.

The Tottenham coach played it straight, simply explaining why Bale didn’t travel rather than giving any words of support.

“I wanted to make it very clear the situation which I am being completely open and honest about," Mourinho said.

It is unlikely Tottenham would push to retain Bale when his loan spell expires at the end of the season, given his limited output since September and reportedly high wages.

With the prospect of Bale wearing a Madrid jersey again pretty much unimaginable, a once-sparkling career would be plunged to even more uncertainty.