BIDEN — President Joe Biden is promising a majority of elementary schools will be open five days a week by the end of his first 100 days in office. He is restating his original goal after his administration came under fire when aides said schools would be considered open if they held in-person learning just one day a week. By Aamer Madhani and Alexandra Jaffe. SENT: 960 words, photos, video. 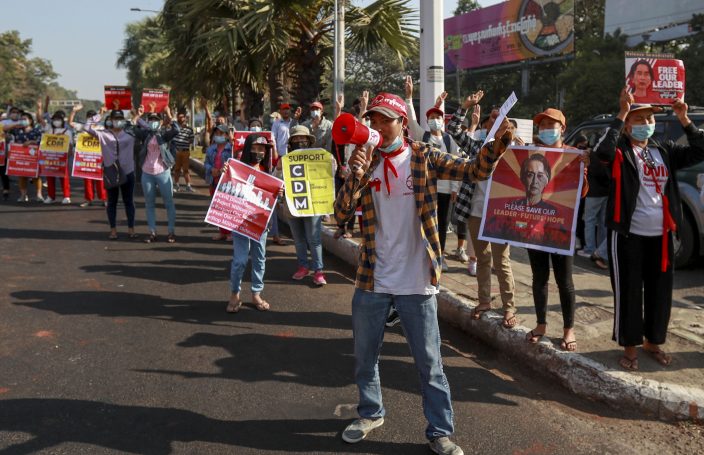 Demonstrators display placards with pictures of deposed Myanmar leader Aung San Suu Kyi to protest against the military coup in Yangon, Myanmar, Wednesday, Feb. 17, 2021. The U.N. expert on human rights in Myanmar warned of the prospect for major violence as demonstrators gather again Wednesday to protest the military's seizure of power. (AP Photo)

VIRUS-OUTBREAK — Months after other major economies, Japan began giving the first coronavirus vaccines to front-line health workers. Many are wondering if the campaign will reach enough people, and in time, to save a Summer Olympics already delayed a year by the worst pandemic in a century. By Mari Yamaguchi. SENT: 910 words, photos. With VIRUS-OUTBREAK-THE-LATEST.

MYANMAR — Demonstrators in Myanmar gather in their largest numbers so far to protest the military’s seizure of power, as a U.N. human rights expert warned that troops being brought to Yangon and elsewhere could signal the prospect for major violence. SENT: 770 words, photos. 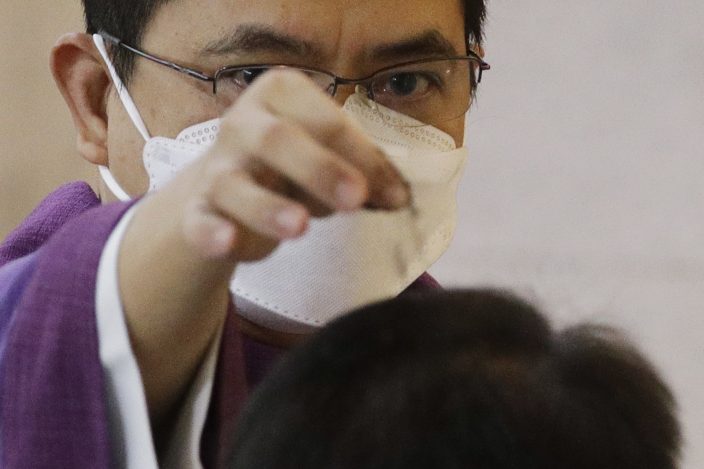 A Catholic priest sprinkles ash on the head of a man during Ash Wednesday rituals Feb 17, 2021, at the St. Gabriel the Archangel Parish in Caloocan, Metro Manila, Philippines. The parish distributed blessed ashes placed in small sachets to residents who cannot go to church so they can mark themselves and other family members at home to prevent the spread of COVID-19 virus. Ash Wednesday marks the start of lent in this largely Roman Catholic country. (AP PhotoAaron Favila)

ISRAEL-PANDEMIC POLITICS — In Israel, the sprint to the March 23 election is striking a notable resemblance to the American presidential brawl in 2020. Candidates are holding virtual events or limited in-person gatherings due to the coronavirus pandemic. Some have signed up star U.S. advisers who faced off against each other during the contest between Trump and Biden. By Laurie Kellman. SENT: 1,040 words, photos. 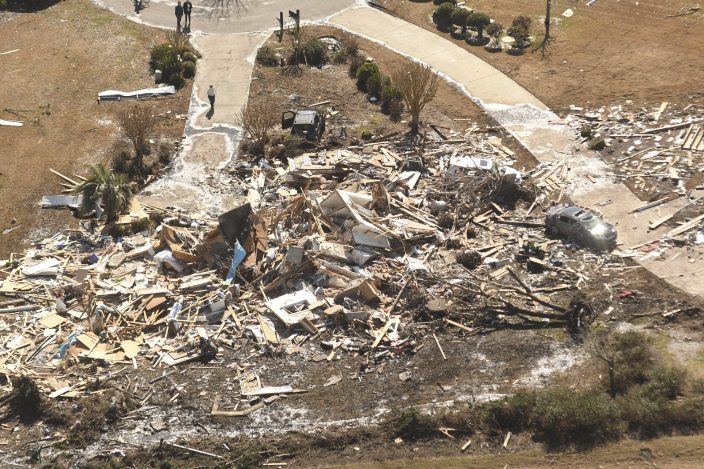 VIRUS OUTBREAK-UN-VACCINES IN CONFLICT — Britain’s foreign secretary says he will urge the U.N. Security Council to adopt a resolution calling for cease-fires in conflict zones to allow the delivery of COVID-19 vaccines. SENT: 610 words.

VIRUS-OUTBREAK-NEW-ZEALAND — A lockdown in the New Zealand city of Auckland will end at midnight, the government announced after concluding a coronavirus outbreak had been contained. SENT: 310 words, photo.

VIRUS-OUTBREAK-UNITED-NATIONS-DELIVERING-VACCINES — The United Nations children’s agency launched an initiative to get airlines to give priority to delivering coronavirus vaccines, medicine and other critical supplies to respond to the global pandemic. SENT: 230 words.

PENTAGON-GLOBAL — The Biden administration faces a conundrum as it rethinks the positioning of military forces around the world: how to focus more on China and Russia without retreating from longstanding Mideast threats — and to make this shift with potentially leaner Pentagon budgets. By National Security Writer Robert Burns. SENT: 970 words, photo.

CAPITOL BREACH-SECURITY — The end of Donald Trump’s impeachment trial is only the beginning of Congress’ reckoning with the riot of Jan. 6. SENT: 1,190 words, photos, video.

WOMEN IN PROUD BOYS — The recent arrest of an Arizona woman who prosecutors say was a member of a Proud Boys cell in Kansas City has intrigued experts who study extremist right-wing movements. SENT: 830 words, photos.

EX-TRUMP-CASINO-IMPLOSION — By mid-morning, a spot on the Atlantic City Boardwalk where movie stars, athletes and rock stars used to party — and a future president honed his instincts for bravado and hype — will be reduced to a smoking pile of rubble. SENT: 790 words, photos. UPCOMING: Will be updated.

JEFFREY EPSTEIN-ASSOCIATE — Jeffrey Epstein’s former girlfriend claimed through her lawyer that a guard physically abused her at a federal lockup in Brooklyn, and then she was punished for complaining about it. SENT: 500 words.

ABORTION-SOUTH CAROLINA — A Republican-backed bill that would likely ban almost all abortions in South Carolina is headed for a crucial vote, having already passed its toughest hurdle last month. SENT: 330 words, photos.

CHINA-ONLINE-CRACKDOWN — China’s internet watchdog is cracking down further on online speech, issuing a requirement that bloggers and influencers have a government-approved credential before they can publish on certain topics. SENT: 800 words, photos.

LIBYA-UPRISING ANNIVERSARY — Libyans mark the 10th anniversary of their 2011 uprising that led to the overthrow and eventual killing of longtime ruler Moammar Gadhafi. SENT: 580 words, photos.

ECUADOR-ELECTIONS — Ecuador is headed toward a presidential runoff that so far has brought disappointing results for nearly all involved at a time when the country, battered by a sour economy even before the pandemic, has been struggling for direction. SENT: 720 words, photos.

VATICAN-LEGION OF CHRIST — A judge in Milan has ruled that trial can go ahead in a case in which priests and lawyers of the Legion of Christ Catholic religious order are accused of offering to pay the family of a sexual abuse victim to lie to prosecutors. SENT: 530 words, photo.

PHILIPPINES-REBEL AMNESTY — The Philippine president approves an amnesty program for Muslim and communist rebels who would agree to surrender their weapons as they return to normal life in the latest such attempt to tame rural insurgencies that have raged for half a century. SENT: 450 words, photos.

FINANCIAL-MARKETS — Asian shares were mostly lower as investors sold to lock in profits from the recent rally driven by hopes economies will gradually return to a pre-pandemic normal. By Business Writer Yuri Kageyama. SENT: 690 words, photos.

VIRUS OUTBREAK-ADDING SPORTS — The athletic director at Fairleigh Dickinson is planning to increase the number of sports played at the small Division I school when most colleges are cutting because of the pandemic. By Sports Writer Tom Canavan. SENT: 1,000 words, photos.