UNITED NATIONS — Britain has circulated a draft resolution to the U.N. Security Council demanding that all warring parties immediately institute a “sustained humanitarian pause” to enable people in conflict areas to be vaccinated against COVID-19.

The proposed resolution reiterates the council’s demand last July 1 for “a general and immediate cessation of hostilities” in major conflicts from Syria and Yemen to Central African Republic, Mali and Sudan and Somalia, an appeal first made by U.N. Secretary-General Antonio Guterres on March 23, 2020, to tackle the coronavirus pandemic.

The draft, obtained Friday by The Associated Press, “emphasizes the need for solidarity, equity, and efficacy and invites donation of vaccine doses from developed economies to low- and middle-income countries and other countries in need, including through the COVAX Facility,” an ambitious World Health Organization project to buy and deliver coronavirus vaccines for the world’s poorest people. 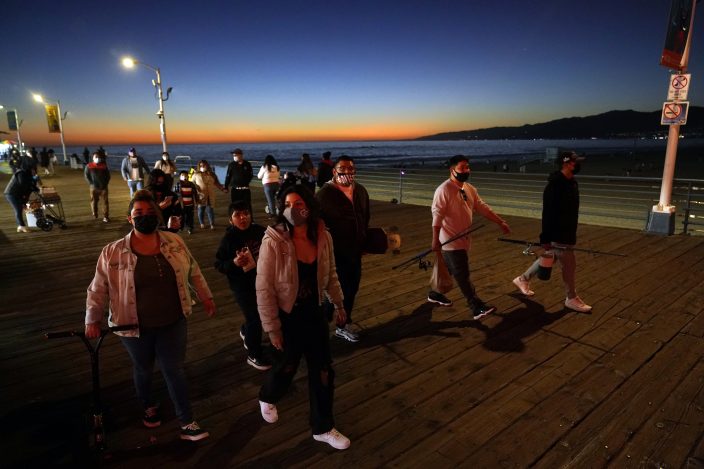 The British draft stresses that “equitable access to affordable COVID-19 vaccines, certified as safe and efficacious, is essential to end the pandemic.”

It would recognize “the role of extensive immunization against COVID-19 as a global public good for health in preventing, containing, and stopping transmission, in order to bring the pandemic to an end.”

The draft follows up on British Foreign Secretary Dominic Raab’s appeal to the 15-member Security Council on Wednesday to adopt a resolution calling for local cease-fires in conflict zones to allow the delivery of COVID-19 vaccines. 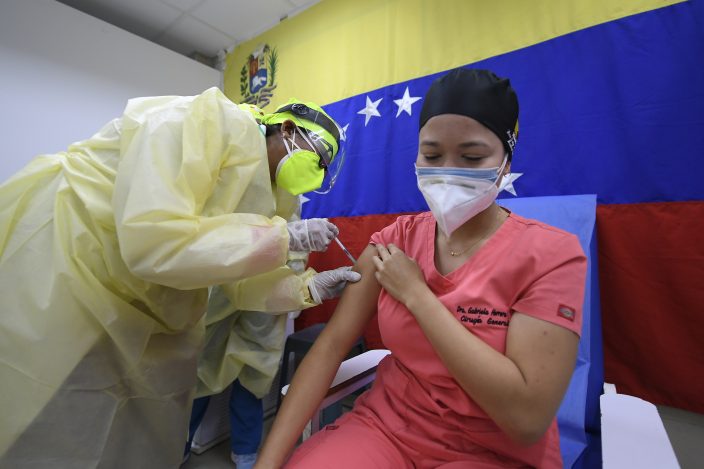 A doctor gives a shot of the Sputnik V vaccine for COVID-19 to a fellow doctor at the Pérez de Leon II public hospital in Caracas, Venezuela, Friday, Feb. 19, 2021. (AP PhotoMatias Delacroix)

MEXICO CITY — Mexico says it will get its first shipment of the Chinese Coronavac vaccine Saturday and by Monday will receive its first lot of the Russian Sputnik V shot. Both shipments are expected to consist of about 200,000 doses.

Health officials say the first shipments of the Chinese and Russian vaccines will be used in low-income neighborhoods of Mexico City or its suburbs.

Mexico is currently using the Pfizer and AstraZeneca vaccines and has applied almost 1.6 million doses of those.

The country will now be faced with the logistical challenge of handling four different vaccines, all of which require two doses. In addition, the Sputnik first shot is different from the second and is not interchangeable.

USC President Carol Folt issued an online letter Friday that said she is “cautiously optimistic” because virus cases are down and vaccinations are ramping up. USC and other universities nationwide were forced to switch to online learning last March.

Both the University of California and California State University systems also have said they plan to reopen their campuses this fall if conditions permit.

During the past week, Oregon averaged more than 14,000 vaccinations per day. As of Thursday, 12% of the state’s population has been vaccinated with first doses and 5% of residents have been fully vaccinated.

BUENOS AIRES, Argentina — President Alberto Fernández asked Argentina’s health minister to resign after a well-known local journalist said he had been given a coronavirus vaccination preferentially after requesting one from the minister, a government official said Friday.

The president “instructed his chief of staff to request the resignation of health minister” Ginés González García, who is in charge of the government’s COVID-19 strategy, said the official, who was not authorized to release the information and spoke to The Associated Press on condition of anonymity. He did not say who would replace González García as health minister.

The scandal erupted when journalist Horacio Verbitsky, whose stories and columns on a website and on the radio are seen as pro-government, said he called the minister to request a vaccinination and González García summoned him to the Health Ministry where he received a Sputnik V vaccine shot Thursday.

“I decided to get vaccinated. I started to find out where to do it. I called my old friend Ginés González García, whom I have known long before he was a minister,” Verbitsky told a local radio station. “I went to the ministry and the team of vaccinators was there.”

Murphy, a Democrat, said he has asked the facilities run by the state to extend hours because of the delay.

The delayed shipments mean some vaccination appointments will likely have to be canceled and rescheduled, according to the governor, though some facilities may have enough shots on hand to keep up. New Jersey’s vaccination rate has roughly been keeping pace with the country overall, which stands at nearly 5% of the population having gotten both shots.

NEW BRUNSWICK, New Jersey — Johnson & Johnson has applied to the World Health Organization for an emergency approval of its COVID-19 vaccines, which should help speed up its use in countries around the world.

J&J said Friday that its Janssen-Cilag International subsidiary has submitted to the WHO the last testing data needed on its vaccine’s efficacy and safety, completing the New Brunswick, New Jersey company’s application for an emergency use listing.

Obtaining that listing will expedite access to J&J’s single-dose vaccine for United Nations procurement agencies and scores of countries. The listing also is required for Johnson & Johnson to supply doses of its vaccine to what’s called the COVAX Facility, a WHO-backed project to ensure equitable access to vaccines for about 190 low- and middle-income countries. Johnson & Johnson in December agreed to provide up to 500 million doses of its vaccine to COVAX through 2022.

“If we are to end the global pandemic, life-saving innovations like vaccines must be within reach for all countries,” Johnson & Johnson Chief Scientific Officer Dr. Paul Stoffels said in a statement.

The company is supplying the vaccine at not-for-profit prices during the pandemic’s acute phase.

Besides requiring only one dose, J&J’s vaccine can be stored for at least three months at standard refrigerator temperatures, making it a good fit for poor and rural areas and developing countries that lack infrastructure for the ultracold storage some other COVID-19 vaccines require.

Interim results from a 44,000-volunteer late-stage testing found the Johnson & Johnson vaccine was 66% effective at preventing moderate to severe cases of COVID-19 in Latin America and 57% effective in South Africa, where a more-contagious variant is spreading. It was 72% effective in the U.S.

Testing also indicated the vaccine was 85% protective against the most serious symptoms — and starting 28 days after their shot, researchers found no one who got the vaccine needed hospitalization or died.

The Latest: S Korea to resume AstraZeneca jab for ages 30-60

The Latest: S. Korea not ruling out curbing vaccine exports

The Latest: Britain to trial virus certificates for events