A first win at Anfield since 1999 for Everton. The worst form since 1923 for Liverpool after a fourth straight home loss.

The English title that took 30 years to win again is being surrendered far too easily by Liverpool.

Richarlison scored after three minutes and Gylfi Sigurdsson netted a late penalty to give Everton a 2-0 victory in the Premier League on Saturday. 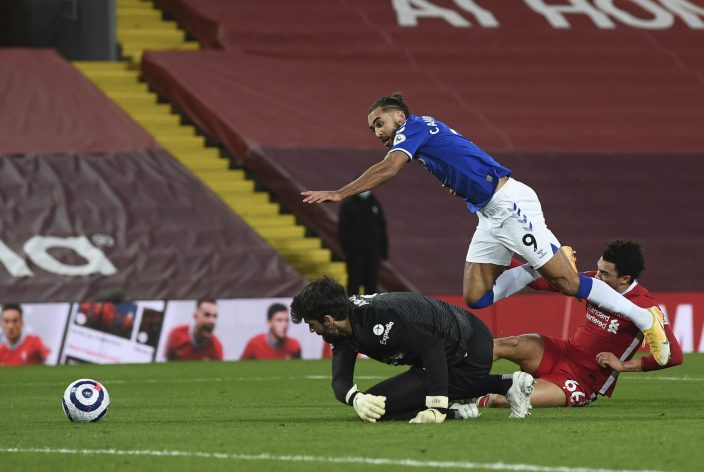 A first Merseyside derby win since 2010 put Everton behind sixth-place Liverpool only on goal difference with a game in hand, while the champions are 16 points behind leader Manchester City. Chelsea is three points ahead in the fourth and final Champions League place after drawing 1-1 at Southampton.

Even worse for Liverpool was losing yet another center back option as Jordan Henderson was forced off injured in the first half.

October’s derby was the start of Liverpool's defensive problems when Virgil Van Dijk was ruled out for the season with an ACL injury after a reckless tackle by Everton goalkeeper Jordan Pickford. 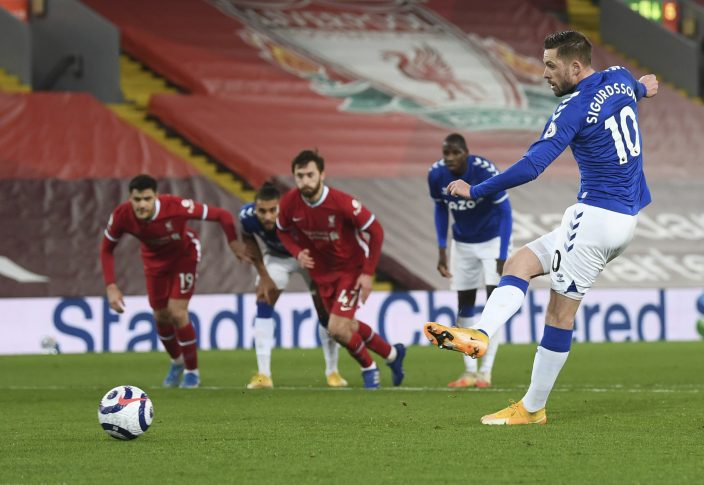 Henderson’s problem appeared to be a groin injury as he pulled up running the ball out of defense in the first half, leaving his side with an 18th different — and most inexperienced — pairing of Ozan Kabak and substitute Nat Phillips.

But by then the damage had already been done as Everton had made its intent clear. Straight from kickoff, the ball was hit forward and, under no pressure, Kabak conceded a corner after six seconds.

The on-loan Schalke player was immediately targeted by Richarlison. It paid off after just three minutes as two weak headers, one from Thiago Alcantara and another from Kabak on his Anfield debut, saw the ball fall to James Rodriguez. He slipped in a pass behind the new boy for Richarlison to run onto and fire an angled drive across Alisson Becker. 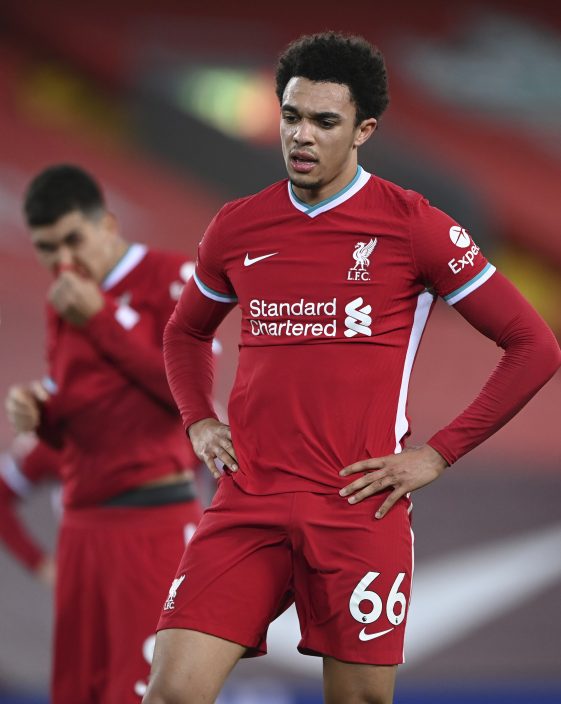 The Brazilian also gave the visitors their first lead in a derby since October 2010, the date of their last victory which came at Goodison Park.

Kabak’s edgy nerves were not eased when he allowed Pickford's clearance to drop over his head straight to the feet of Richarlison, before moments later clattering James Rodriguez after a mistimed challenge and he finished the half with a booking — for the third successive match — to cap a poor 45 minutes.

His confidence would also not have been helped by the loss of Henderson just before the half hour, with the 23-year-old Phillips arriving off the bench as the senior partner despite making just his eighth appearance for the club. 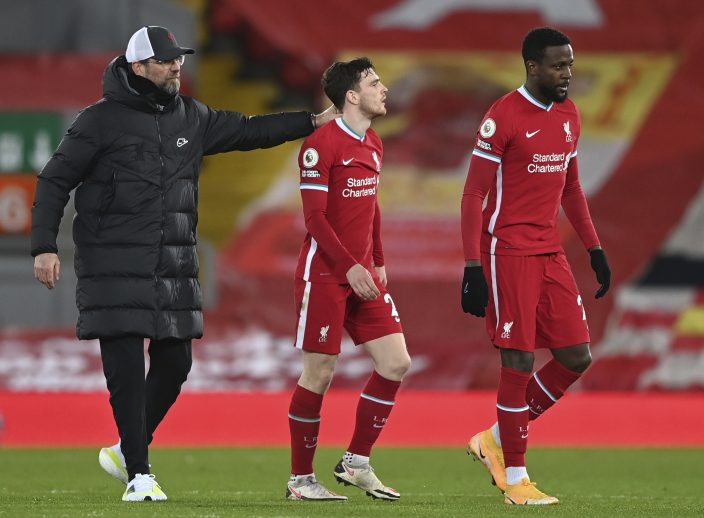 At least Alisson, responsible for three errors in his last two league matches, was back on form with a good save to deny a diving Seamus Coleman header from Lucas Digne’s cross.

Pickford was also in good form. He flew to his right to tip Henderson’s swerving volley around the post before the Liverpool captain’s exit.

The England No. 1 was in action again catching Sadio Mane's header early in the second half. Pickford dived at the feet of striker Mohamed Salah as Liverpool turned up the pressure without really laying siege to the Everton goal. 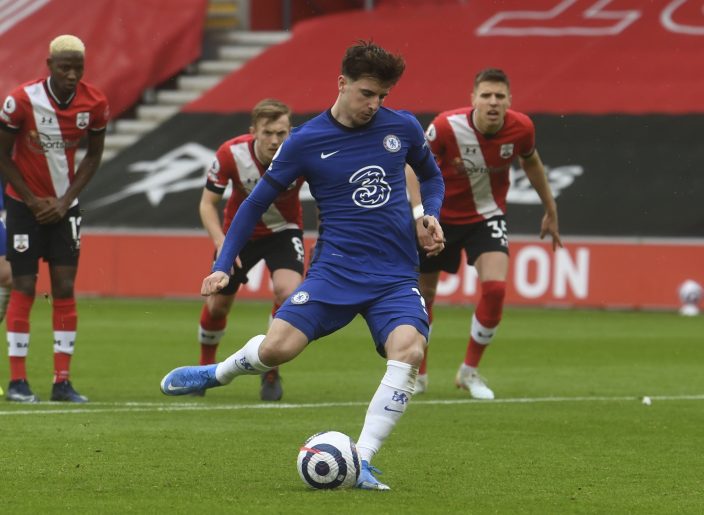 More holes opened up in Liverpool’s defense and, from a counter-attack, substitute Dominic Calvert-Lewin was adjudged to have been brought down inside the box by Trent Alexander-Arnold.

Substitute Sigurdsson stroked home the penalty to spark wild celebrations among the Everton contingent. The only disappointment for Carlo Ancelotti’s side will have been not having any fans allowed into the home of its greatest rival, due to the pandemic, to see the landmark triumph. 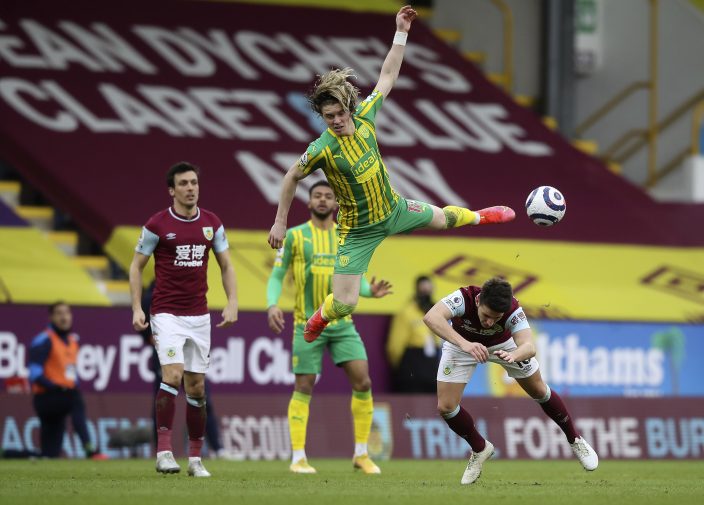 Chelsea manager Thomas Tuchel criticized Callum Hudson-Odoi after hauling off the forward in the draw at Southampton — only 31 minutes after replacing the injured Tammy Abraham at halftime.

“I was not happy with his attitude, energy and counter-pressing,” Tuchel said. “In a game where it’s hard to create chances, you need to rely on counter-pressing to force maybe errors, to get a second ball and get an easy chance.

Mason Mount equalized in the 54th from a penalty after being brought down by Danny Ings.

While Southampton ended a six-game losing run in the league, the point stopped Chelsea recording a sixth straight win in all competitions.

Burnley is nine points clear of the drop zone.

Loneliness is rampant. A simple call, or hug, may be a ...

The stranger’s call came when Dian ...

Too much red? Old Trafford color clash a problem for Un ...

Here’s a colorful explanation for ...