BERLIN — Elementary schools and kindergartens in more than half of Germany’s 16 states reopened Monday after two months of closure due to the coronavirus pandemic.

The move comes despite growing signs that the decline in case numbers in Germany is flattening out again and even rising in some areas.

Germany’s education minister, Anja Karliczek, has defended the decision to reopen schools, saying younger children in particular benefit from learning together in groups. 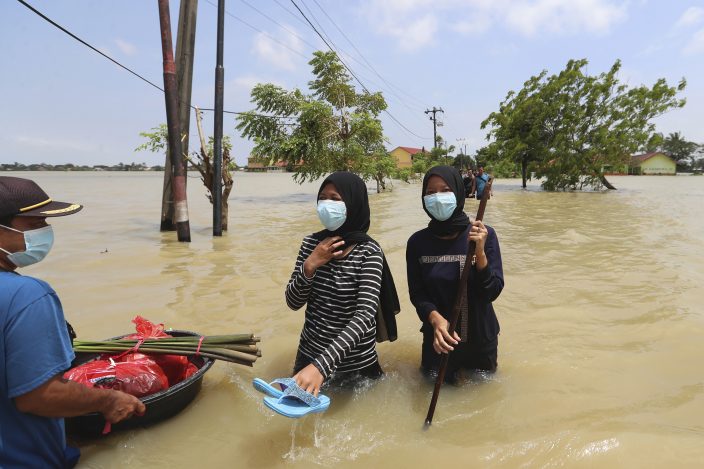 Indonesian men carry their belongings as they wade through the water at a flooded neighborhood following heavy rains in Bekasi, Indonesia, Monday, Feb. 22, 2021. Thousands of residents are being evacuated on the outskirts of Indonesia’s capital amid flooding after the Citarum River embankment broke. (AP PhotoAchmad Ibrahim)

Karliczek told German news agency dpa that schools should use “all available means to prevent virus transmission” and expressed confidence that state education officials — who are in charge of school matters in Germany — would consider infection numbers when deciding where to reopen.

Germany’s disease control agency say there were 4,369 newly confirmed cases and 62 deaths in the past day, though Monday’s numbers are often low due to reporting delays over the weekend.

Education unions have called for teachers and kindergarten workers to be moved into a higher priority group for vaccinations, an idea that government officials have said they will consider.

— Elementary schools and kindergartens reopen in more than half of Germany’s 16 states despite a flattening of the decline in coronavirus numbers.

— Every Democratic vote is needed on $1.9 trillion COVID-19 relief bill, but minimum wage and other issues will force choices

He was tested positive during pre-departure tests of the squad and was isolated.

Kumara is the third member of the team to test positive for COVID-19. Coach Mickey Arthur and batsman Lahiru Thirimanne earlier tested positive, throwing the tour in doubt. However, the team was expected to depart for Antigua as scheduled later Monday.

Health authorities said on Monday that they have decided to purchase 10 million doses of the Oxford-AstraZenica vaccine from neighboring India. It is the only vaccine currently approved by the regulatory body in Sri Lanka.

Sri Lanka is currently administering 500,000 doses of the Oxford-AstraZenica vaccine donated by India.

WASHINGTON — President Joe Biden will mark 500,000 U.S. lives lost from COVID-19 with a moment of silence and candle-lighting ceremony at the White House.

The nation is expected to pass the grim milestone on Monday, just over a year after the first confirmed U.S. fatality of the pandemic.

The White House said Biden will deliver remarks at sunset to honor those who lost their lives. He will be joined by first lady Jill Biden and Vice President Kamala Harris and her husband, Doug Emhoff. They will participate in the moment of silence and lighting ceremony.

Biden has made a point of recognizing the lives lost from the coronavirus. His first event upon arriving in Washington for his inauguration a month ago was to deliver remarks at a COVID-19 memorial ceremony.

WELLINGTON, New Zealand — New Zealand will remove remaining coronavirus restrictions from Auckland on Monday after an outbreak discovered in the largest city fades.

Prime Minister Jacinda Ardern said more than 72,000 tests had found no evidence the virus was spreading in the community.

The source of the outbreak remains unclear, although authorities continue to investigate whether there is a connection between infected airline passengers and the mother, who works at a company which cleans laundry for airlines.

New Zealand has an elimination strategy with the coronavirus and has managed to stamp out its spread in the community.