Naomi Osaka's Australian Open championship moved her up one spot to No. 2 in the WTA rankings Monday, while men's finalist Daniil Medvedev rose to a career-best No. 3 behind winner Novak Djokovic on the ATP list.

Jennifer Brady, the 25-year-old American who was the runner-up to Osaka, jumped 11 spots to No. 13, her first time inside the Top 20.

Aslan Karatsev's historic run from qualifying to the final four before losing to nine-time Australian Open champion Djokovic allowed him to vault 72 places from 114th to 42nd. He is the first man in the professional era to reach the semifinals in his debut in the main draw of a major tournament. 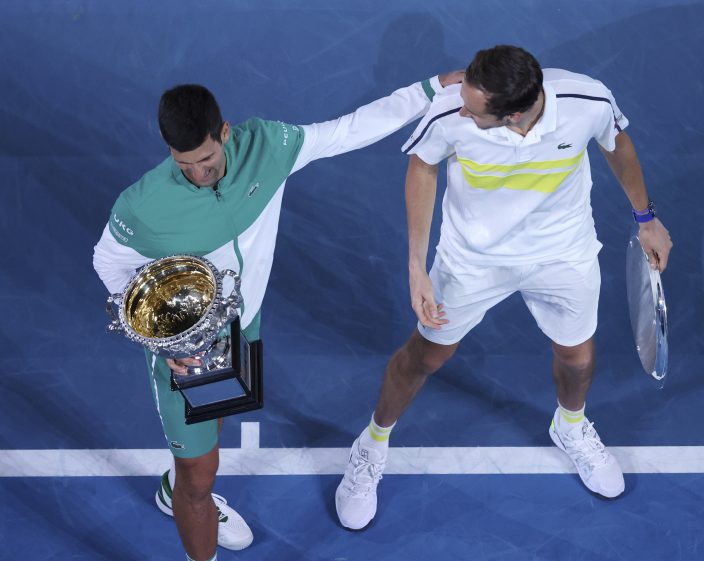 Despite winning the past two Grand Slam tournaments she entered, Osaka still trails No. 1 Ash Barty — who lost in the quarterfinals at Melbourne Park — because of the way the tennis tours are calculating what they're calling “frozen” rankings following last season's hiatus caused by the coronavirus pandemic.

Essentially, in order for players' rankings not to be hurt if they skipped events as a result of the COVID-19 outbreak, the WTA gives credit for someone's best 16 tournaments since March 2019.

Barty took nearly a full year off, for example, but still has her points from winning the 2019 French Open and reaching the semifinals at the 2020 Australian Open.

Serena Williams climbed four spots from No. 11 to No. 7 to get back into the Top 10 after making it to the semifinals in Australia a year after losing in the third round there.

After her previous title in Melbourne, Osaka became the first tennis player from Asia to reach No. 1 in the women's or men's rankings. She was born in Japan to a Japanese mother and Haitian father; they moved to the United States when Osaka was 3.

Osaka now swaps places with Simona Halep, who goes from No. 2 to No. 3 after losing to Williams in the quarterfinals.

Aryna Sabalenka now leads the WTA doubles rankings after pairing with Elise Mertens to win the Australian Open women's doubles title. Sabalenka is No. 8 in singles, making her the first woman to be No. 1 in doubles and in the Top 10 in singles since Sara Errani in February 2014.

After beating Medvedev 7-5, 6-2, 6-2 on Sunday for his 18th Grand Slam title, Djokovic is assured of remaining at No. 1 at least another two weeks, which will raise his career total in that spot to 311. That means he will break Roger Federer's ATP record of 310 weeks atop the rankings.

There were no other changes in the men's Top 10, including Roger Federer remaining at No. 5 despite not having competed in more than a year after having two knee operations. He is expected to return to the tour next month.