KABUL, Afghanistan — Afghanistan has begun administering a COVID-19 vaccine with a ceremony at the presidential palace.

Afghanistan received 500,000 doses of the Oxford-AstraZeneca vaccine from the government of India earlier this month. After the vaccine’s approval by the World Health Organization, it has begun immunizing front-line personnel including health workers, reporters and security forces. 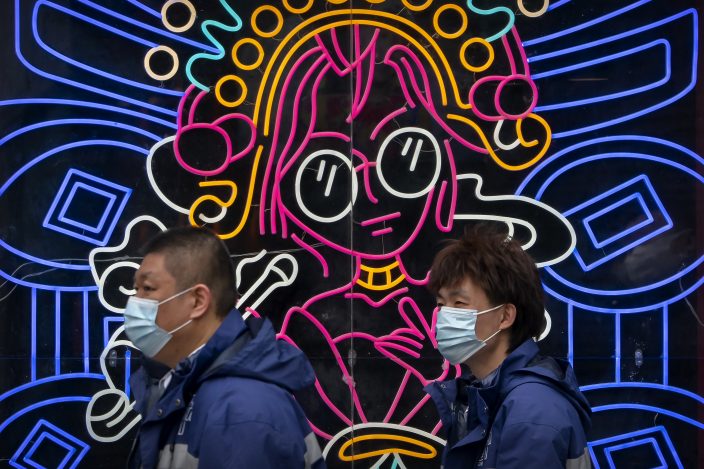 People wearing face masks to protect against the spread of the coronavirus walk past a display in the window of a commercial space in Beijing, Tuesday, Feb. 23, 2021. China has been regularly reporting no locally transmitted cases of COVID-19 as it works to maintain control of the pandemic within its borders. (AP PhotoMark Schiefelbein)

— British Prime Minister Boris Johnson to lay out plan to ease coronavirus restrictions but pubs, gyms and hairdressers to stay closed for weeks 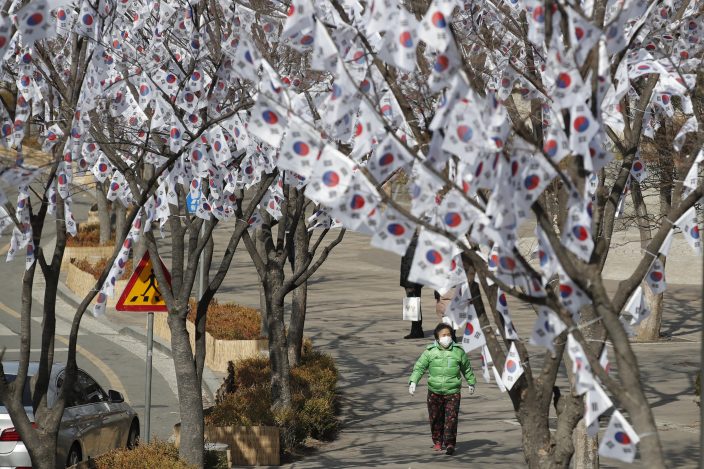 A woman wearing a face mask as a precaution against the coronavirus, walks near national flags hanging on trees ahead of the 102nd anniversary of the March First Independence Movement Day, in Seoul, South Korea, Tuesday, Feb. 23, 2021. (AP PhotoLee Jin-man)

— Every Democratic vote is needed on $1.9 trillion COVID-19 relief bill, but minimum wage and other issues will force choices 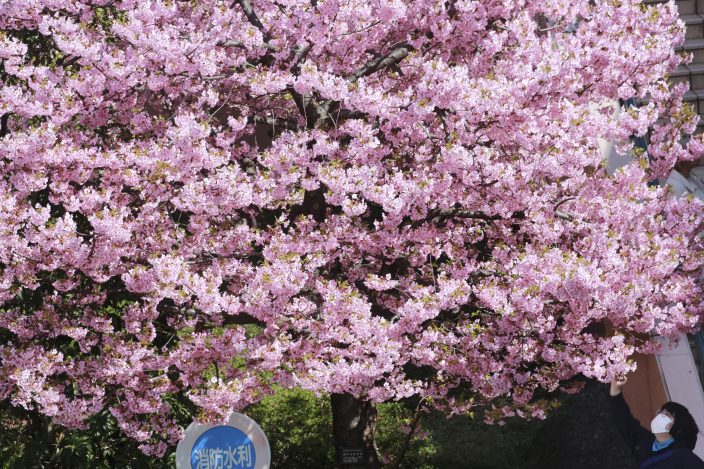 A woman wearing a face mask to protect against the spread of the coronavirus looks at cherry blossoms in Tokyo, Tuesday, Feb. 23, 2021. (AP PhotoKoji Sasahara) 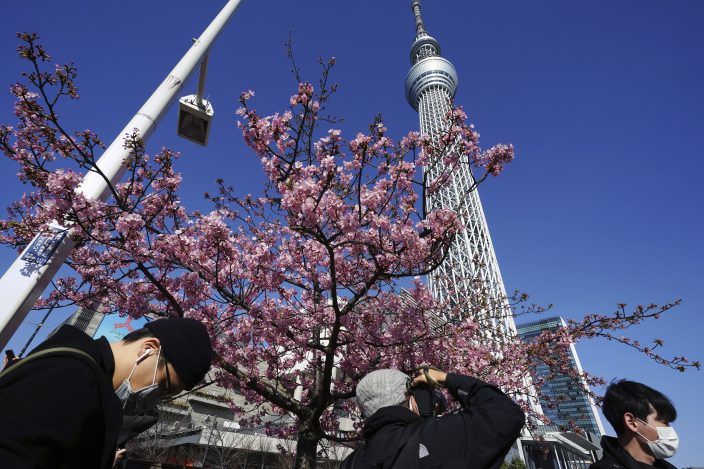 The government “will immunize 14 million people, for which we need 28 million doses, and the government is ready to purchase that,” government spokesman Ramesh Pathirana said Tuesday.

Sri Lanka is currently administering 500,000 doses of the Oxford-AstraZeneca vaccine that were donated by India. By Tuesday, it had been given to 354,352 people. 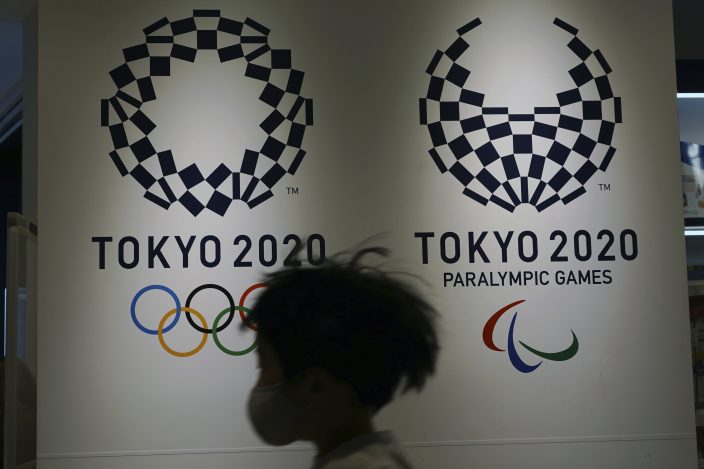 A child wearing a protective mask to help curb the spread of the coronavirus runs in front of the logos of the Tokyo 2020 Olympic and Paralympic Games Tuesday, Feb. 23, 2021, in Tokyo. Japan began to roll out coronavirus vaccines on Wednesday, a critical move that might boost the Olympics. (AP PhotoEugene Hoshiko)

Sri Lanka is witnessing a spike in COVID-19 cases, mostly in the capital, Colombo. It has recorded a total of 80,516 cases, including 450 deaths.

Some 200,000 doses arrived to Mexico City’s international airport late Monday night aboard a British Airways flight from Moscow. Officials plan to use the doses to begin vaccinating seniors in the capital’s most marginalized boroughs on Wednesday. Mexico Foreign Affairs Secretary Marcelo Ebrard confirmed their arrival via Twitter. 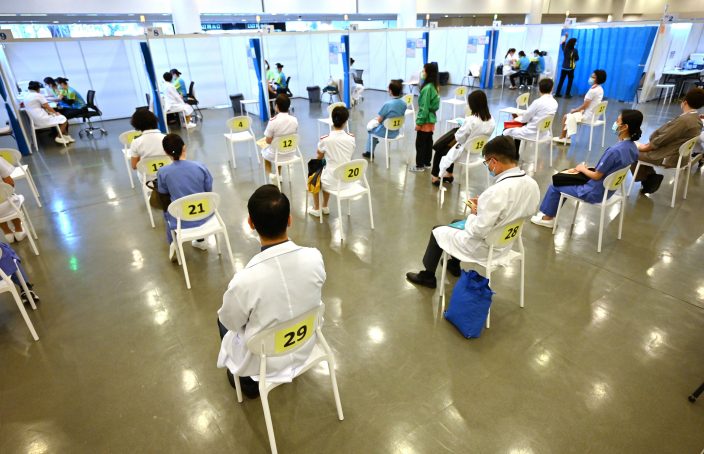 Doctors and nurses wait to receive China's Sinovac COVID-19 coronavirus vaccine at a community vaccination centre in Hong Kong Tuesday, Feb. 23, 2021. Frontline workers and high risk people are the first in line to be vaccinated in the territory. (Peter ParksPool Photo via AP)

In early February, Mexican regulators gave Sputnik V emergency approval and the government signed a contract to bring 400,000 doses to Mexico in February. It was unclear when the next shipment of Sputnik would arrive.

MANILA, Philippines — The Philippine president will reject recommendations to further ease coronavirus quarantine restrictions across the country until a delayed vaccination campaign kicks off, his spokesman said. 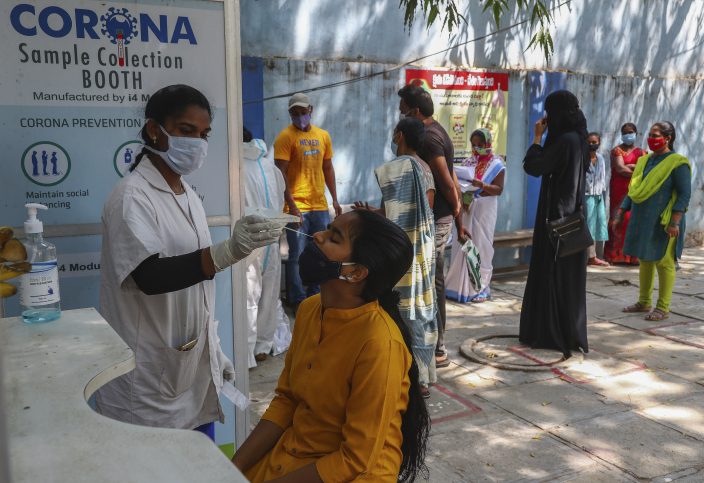 A health worker takes a nasal swab sample at a COVID-19 testing center in Hyderabad, India, Tuesday, Feb. 23, 2021. Cases of COVID-19 are increasing in some parts of India after months of a steady nationwide decline, prompting authorities to impose lockdowns and other virus restrictions. (AP PhotoMahesh Kumar A.)

President Rodrigo Duterte also rejected a plan to resume face-to-face school classes in some pilot areas until vaccinations, which have been set back by delays in the arrival of initial batches of COVID-19 vaccine, have been launched, presidential spokesman Harry Roque said.

The scheduled delivery on Tuesday of 600,000 doses from Sinovac Biotech Ltd. was postponed anew after the China-based company failed to immediately secure an emergency-use permit from Manila’s Food and Drug Administration. Sinovac got the authorization Monday.

Top economic officials have asked Duterte to consider further easing quarantine restrictions in the country starting in March to bolster the economy, which has suffered one of the worst recessions in the region, and stave off hunger. But Duterte rejected the recommendations. 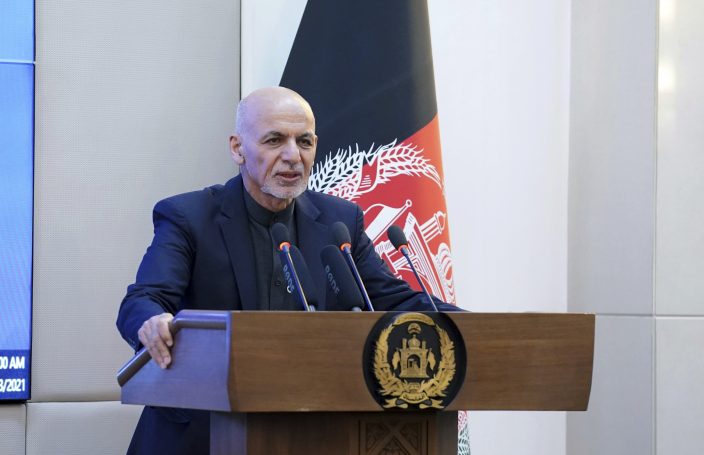 “The chief executive recognizes the importance of re-opening the economy and its impact on people’s livelihoods,” Roque said but added that the president “gives higher premium to public health and safety.”

The Philippines has reported more than 563,000 confirmed cases of COVID-19 infections and more than 12,000 deaths, the second highest in Southeast Asia. The government has faced criticisms for failing to immediately launch a massive vaccine campaign for about 70 million Filipinos.

Biden is urging Americans to resist becoming “numb to the sorrow” and “viewing each life as a statistic.” He says the people lost were “extraordinary.” 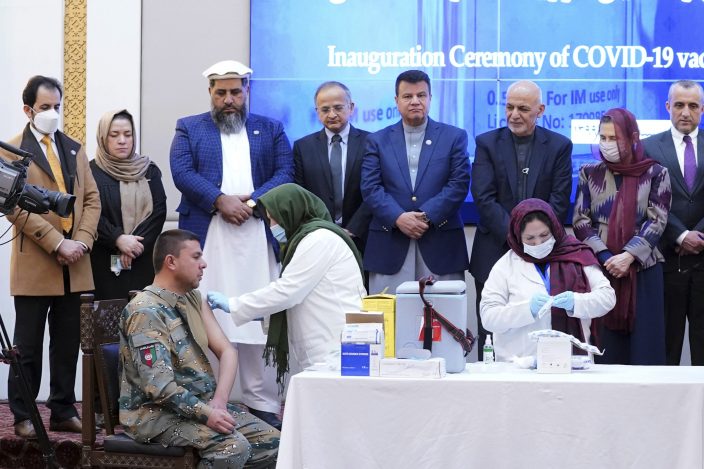 Biden also touched on the personal tragedy he’s experienced in losing his first wife and baby daughter in a car collision, and later losing an adult son to brain cancer.

Biden tells the nation’s he knows it’s hard but that “to heal, we must remember.”

He spoke before holding a moment of silence in the White House and inviting the public to join.

WASHINGTON-- Drugmaker Johnson & Johnson says it will be able to provide 20 million U.S. doses of its single-shot COVID-19 vaccine by the end of March, assuming it gets the greenlight from federal regulators.

J&J disclosed the figure in written testimony ahead of a Congressional hearing on Tuesday looking at the country’s vaccine supply. White House officials cautioned last week that initial supplies of J&J’s vaccine would be limited.

The company reiterated that it will have capacity to provide 100 million vaccine doses to the U.S. by the end of June. That supply will help government officials reach the goal of having enough injections to vaccinate most adult Americans later this year. On a global scale the company aims to produce 1 billion doses this year.

U.S. health regulators are still reviewing the safety and effectiveness of the shot and a decision to allow its emergency use is expected later this week. J&J’s vaccine would be the first in the U.S. that requires only a single shot.

The vaccines now being rolled out do still protect against different variants of the virus, the FDA stressed. But viruses mutate constantly, and some new versions are starting to raise concerns. So FDA issued new guidelines for vaccines -- as well as for virus tests and treatments -- on steps that companies can start taking to get ready.

Marks said the needed tests would include a few hundred people rather than thousands, and could take just two or three months. Volunteers would receive experimental doses of the tweaked vaccine and then have their blood checked to see if it revved up the immune system about as well as the original vaccines do.

Marks said the hope is that if vaccines have to be updated, they would work broadly enough to cover both the original virus and a new mutant version -- rather than requiring a combination shot like flu vaccines. Having to make multiple kinds of vaccine and then combine them would put a greater strain on already stretched production capabilities.