When we last saw Franklin Saint, he had problems, not least of which was three fresh bullet wounds. As season three of “Snowfall” ended, rivals were circling his mini-drug empire and violence levels were up.

“After being shot three times, he’s completely broken, not only physically but spiritually and in his mind, too,” says Damson Idris, who portrays the canny Saint. "So season four is him rebuilding himself.”

The new season kicks off Wednesday and opens on New Year's Eve in 1985 with crack ravaging the streets of South Central Los Angeles and the CIA using drug money to fuel its influence in Latin America. 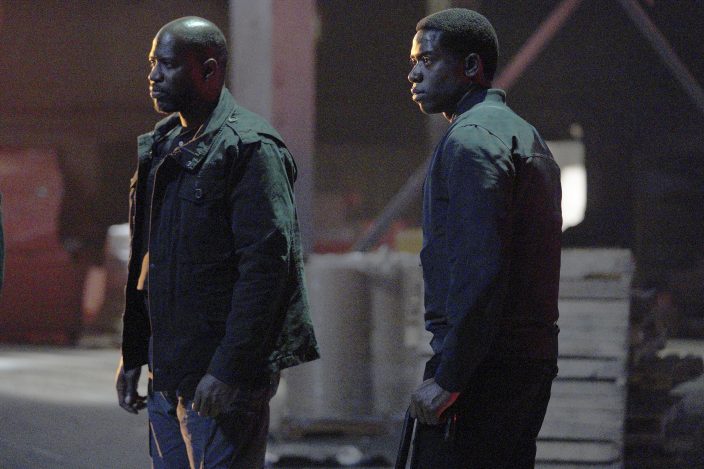 This image released by FX shows Kwame Patterson as Lurp, left, and Damson Idris as Franklin Saint in a scene from "Snowfall." Season four premiers on FX on Wednesday, and Thursday on FX on Hulu. (Byron CohenFX via AP)

Idris hopes the new episodes can both enchant current fans and attract new ones. “I think the work we’re doing on this show is going to be spoken of alongside the likes of ‘The Wire’ and ‘The Sopranos,’ which would be a huge privilege in my opinion,” he said by phone from London.

The FX series was co-created by the late John Singleton and keeps the Oscar-nominated director's authenticity and ability to tell a large story from a small one. “Snowfall” is ambitious in its attempt to talk about both crack and the Contras.

“His legacy lives on,” said Idris. “I remember that he would talk to me about Nina Simone and how Nina Simone said that the artist’s job is to reflect the times. In my opinion, Singleton reflected the times. And that’s the legacy and footsteps I hope to follow in.”

This image released by FX shows Damson Idris as Franklin Saint in "Snowfall." Season four premiers on FX on Wednesday and Thursday on FX on Hulu. (Byron CohenFX via AP)

“The show is so much bigger than Franklin Saint in South Central. I think it’s a show for a global audience,” said Idris. “It’s educational alongside of being entertaining.”

Dave Andron, co-creator, showrunner and an executive producer, said season four will up the violence levels as the war on drugs takes hold, prompting scare tactics and the militarization of police.

“It is obviously very tragic and yet really rich, fertile ground,” he said. "There’s a real scope and spine to this thing. It’s incredible that it hasn’t been told in this way before."

The new season opens with Saint struggling after being shot. He uses a cane and prescription pain pills, wincing at simple tasks like putting on clothes. But when a rival calls him soft and weak, another warns: “Boy’s brain still work.”

On the streets, demand for crack is soaring and competition is fierce. Saint is tempted to get out of the game but knows that's not an option. “What I know for sure is, if we bail, there'll be chaos," he says. "I have to stay and fight.”

“He’s proven to everyone that he isn’t the strongest. He isn’t impenetrable. He isn’t James Bond,” said Idris. “Everyone is seeing Franklin in a weak state and for that reason, he’s being questioned.”

The show may seem very grounded in the mid-'80s with its use of pagers and Lacoste shirts, but viewers will instantly see a modern comparison between the way crack was criminalized then and the way opioids are seen as a health issue today.

There is also an examination of structural racism, as in season three when viewers got a chance to see an alternative life for Saint, one in which he goes to college only to inevitably end up back in the drug game. Idris said that episode showed a rigged racial system for some young Black men.

“The reason they got into the selling of these drugs wasn’t so they could be gangsters and run around killing people. No. It was to provide for their families because they didn’t have equal opportunities to do so,” he said.

Andron said viewers are being rewarded for their trust in Idris, who was an unknown English actor when first cast in “Snowfall,” even initially causing a kerfuffle that he wasn't American.

“He’s just an incredible talent and he commands the screen. He obviously has a long, long, long career ahead of him,” said Andron. “It’s been an incredible process to watch him be the guy who can put the show on his back.”

Like all things, the virus pandemic complicated the filming of season four. The cast and crew started work in January 2020 and got to episode four when the set was shut down that February. By the time they reassembled in November, the actors' hairstyles and weight had changed.

"I can’t wait for the viewers to see a shift around episode four or five and be like, ‘Hey, Franklin’s Afro looks way bigger in this scene compared to the last one,’” Idris laughs.

Idris speaks with great love for the show and though he's making a name for himself in such films as “Farming” and “Outside the Wire,” he knows that his career owes much to Franklin Saint.

“This show from season one pushed me into the deep end, forced me to lead a network TV show at the age of 23 with little to no experience and come out on the other end, far more educated and far more respectful of the art and industry that we’re in,” he said.